Casa Batlló in Barcelona: 10 Things to Know Before Visiting it

Visit Casa Batlló in Barcelona it's like stepping into a fairy tale! I believe that even today, after traveling a lot, Casa Batlló is one of the most unusual things I've ever seen in my life.

Located on the famous Passeig de Gràcia of Barcelona in the heart of the Eixample area in the center of the block of buildings called "Discord's Apple", Casa Batllò is undoubtedly one of the main attractions of Barcelona and consequently also one of the most visited in the world.

UPDATE JULY 2021: Casa Batllo 'has reopened its doors to the public. You can visit it every day from 9 to 18:30 by buying the ticket online from the button below.

CAUTION: it is no longer possible to buy tickets at the ticket office! 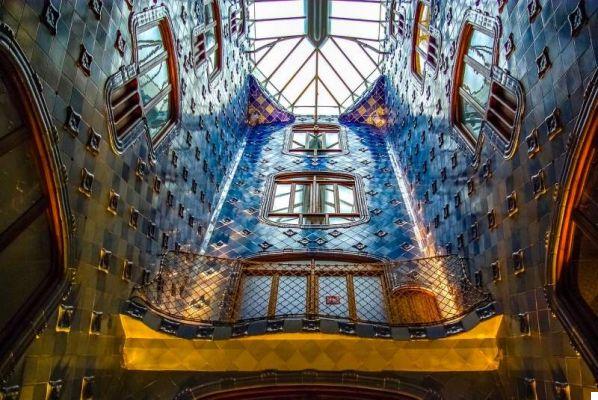 And it's super easy too get there by metro: it is located in the Eixample district and the metro stop is Paseo de Gracia, and is connected with the green line L3, the yellow L4 and the purple L2.

Whether you intend to visit it or you are just curious to know more, here it is Find out more about Casa Batllò (which I learned when I lived in Barcelona)!

10 Things to Know About Casa Batlló in Barcelona

1 - Casa Batlló was designed by the famous architect Antoni Gaudí

You probably already know, but Antoni Gaudí he is the most famous Catalan architect of all time, and is the mastermind behind many of the city's most iconic monuments. There Sagrada Familia, one of the most unusual churches in the world as well as La Pedrera, located not far from Casa Batlló, the Park Guell... they are all his works.

As the most of Gaudí's works, also Casa Batlló is a modernist building and his style is perfectly distinguishable from the search for rich decoration (a bit tacky at times) and a taste for a total asymmetry of the lines.

Other major modernist buildings in Barcelona include the Palace of Lluís Domènech i Montaner andSant Pau hospital, as well as the house Martí by Josep Puig i Cadafalch, now home to the restaurant Els Quatre Gats.

2 - What tickets are available

As usual, when it comes to Barcelona, it is always best to buy tickets online first. In fact, when I lived in Barcelona I tried several times to go directly to the ticket office and when I saw the monstrous queue I gave up.

CAUTION that at the moment (August 2021) it is no longer possible to buy tickets at the ticket office, but only online

However, living there I was able to go back, but if you only do it for a few days you may regret not purchasing your tickets earlier (about 3.000 people visit Casa Batlló every day).

Tickets can in fact be purchased in 4 ways:

THU below you find the diversthe types of standard tickets that can be purchased online:

La Barcelona Card It gives you uno sconto on the cost of the ticket for Casa Battló and many other attractions in Barcelona: to get it when you buy the ticket you must enter the code received by email on the payment screen.

3 - Its nickname is "the house of bones"

Casa Battló has earned the nickname “Casa dels ossos” in Catalan. The reason for this is related to the legend of Saint George, patron saint of Catalonia, according to whose legend, he killed the dragon with his sword to save the princess and the people from the fury of the animal.


But this is not the only interpretation. If you look at the façade you can see that the balconies look like skull fragments with openings for the eyes and the nose, the columns on the first floor have the shape of human bones (tibia) and numerous other details that can suggest a skeleton.

It may seem incredible now, but in 1906, when Gaudí finished his remodeling of the building, Casa Batlló was "put up for competition" as the best project of the year ... and lost!

There were a number of architects in this competition: notable houses such as Casa Ametller, Casa Lleó Morera, Casa Mulleras and Casa Josefina Bonet are all within a short distance of each other.

5 - The building is decorated with a mosaic style called trencadís

Widely considered one of the first to use the technique known as trencadí, Gaudí used it as a particular form of mosaic in many of his works. Perhaps the most famous example is Park Güell, on the rolling park benches and the iconic salamander. Trencadís, which means "broken" or "shattered" in Catalan, is a style of mosaic that uses shards of tiles and porcelain cemented together.

In short, it could be said that Gaudí was a pioneer of recycling!

6 - There are no straight lines

One of the recurring features of modernism was a preference for curved lines over straight lines and Gaudí took this principle to heart in most of his work. According to the great architect, there are no straight lines and angles in nature.

For this reason in his works most of the columns, walls and other architectural features where one might expect to find straight lines are instead designed with curved lines.

I love the legends... I think they give that touch of magic to the places I go to visit (I have told many legends on this blog, such as legend of the Iguazu Falls o that of the Poàs volcano in Costa Rica).

If you too are like me then I'll briefly tell you about it legend of Sant Jordi (San Giorgio) and the references you can find at Casa Batlló.

Once in Montblanc (Tarragona) lived a dragon that terrified the country. To appease his anger, the villagers offered one human every day so that he would not kill the entire city.

Until the princess was drawn by lot as a victim. But St. George ran to his aid by piercing the creature and saving the town and all its inhabitants.

Even today, on April 23, feast of San Jordi, the streets of cities and towns are crowded with people and stalls that they sell books and roses.

If you look closely at Casa Batlló, you can see the following references to the legend:

1 - The roof of Casa Batlló depicts the scaly back of the dragon.

2 - On the roof, you will find a huge cross with four arms, representing the triumphant sword of St. George on the dragon's back.

3 - On the lower floors, the previous Dragon victims are depicted in the form of skull-shaped balconies and bone-shaped pillars.

4 - The flower-shaped balcony above refers to the balcony of the Princess.

These references to the legend can also be seen from the outside.
However, to see two more references, you need to enter.

5 - In the entrance hall of Casa Batllo, there is a staircase whose upper part looks like one dragon tail - with a lot of vertebrae tied together.

6 - The last reference to the legend is the attic, which resembles that of a rib cage of a large animal.

Do you know any other building that tells a story? If so, leave it for me in the comments!

8 - Casa Batllò can also be visited in the evening

It is worth taking a look at Casa Batlló by Gaudí at night, when it is illuminated.

The building was designed by Gaudí for Josep Batlló, a wealthy aristocrat, as an exclusive home. Señor Batlló lived on the two lower floors with his family and the upper floors were rented.

This building it is an extraordinarily unique work and it is worth visiting especially at night.

Every summer Casa Batlló organizes a series of music events on the roof called Magic Nights. From May to November it is possible to buy tickets to visit the Casa Batlló and watch the musical show.

In 2018 the Magic Nights they start on May 14th and end on November 4th. The Magic Nights ticket entitles you to a visit to the House, a video guide, two drinks and a concert on the roof.

It gets better and better book online first because the tickets sell out quickly. You can buy the ticket (with immediate confirmation) by clicking on the link below:

☞ Buy here the ticket for the MAGIC NIGHTS

9 - Casa Batlló was not built from scratch

Although the building looks 100% the work of Gaudí, the Casa Batlló as we know it was modeled and built on an existing building. Originally built in 1877, the house was bought by the wealthy textile factory owned by Josep Batlló in 1900 who commissioned Gaudí to redesign it.

Although more modern buildings block the view today, it is believed that it was once possible see the Sagrada Familia from the roof window of Casa Batlló. Gaudí was a devoted religious man and it would not have been surprising for him to include such a feature in his design.

An anecdote: his original design for the Sagrada Familia - which should finally be completed on the centenary of Gaudí's death in 2026 - was for the church to be just one meter lower than the Montjuïc Hill.

Gaudí believed that the creations of humans should not be greater than those of God. 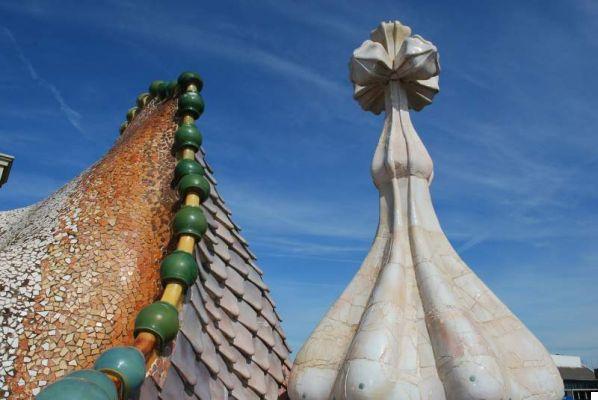 I Casa Batlló prices vary according to the ticket or tour you choose.

However the costs for the ticket online are the following: 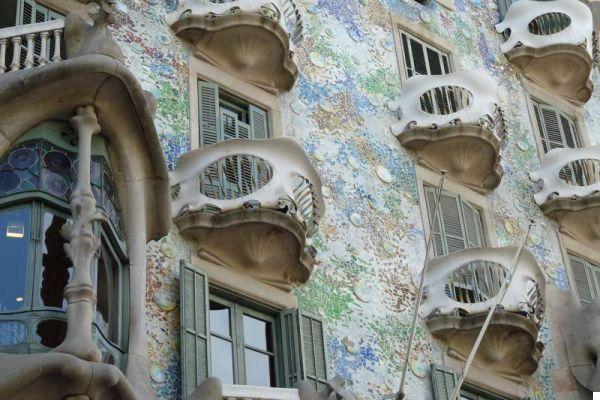 Do Casa Batlló tickets expire or can they be taken months in advance? Tickets do not expire but are valid only on the date and time chosen at the time of purchase.

Are the tickets purchased refundable? No they are not, but if you buy from Tiqets the tickets are not nominal so you can give them to someone else.

How can I purchase the student discount? An identity document is enough.

When is it best to visit Casa Batlló? In the early morning, there are usually fewer people. Or before sunset, around 17pm.

Does Casa Batlló have accessibility for people with reduced mobility? Yes, it has several lifts so you won't have any problems visiting most of the house. However, the roof is currently not wheelchair accessible.

Do I have to print the ticket? No, it is not necessary, you can show it at the entrance directly on your mobile phone or tablet.

Can I take pictures? Sure, but you can't bring your easel and photos must be for personal, non-commercial purposes only.

From what time can I see it illuminated? From dusk. Better to go an hour before sunset in order to see it both in light and in darkness. 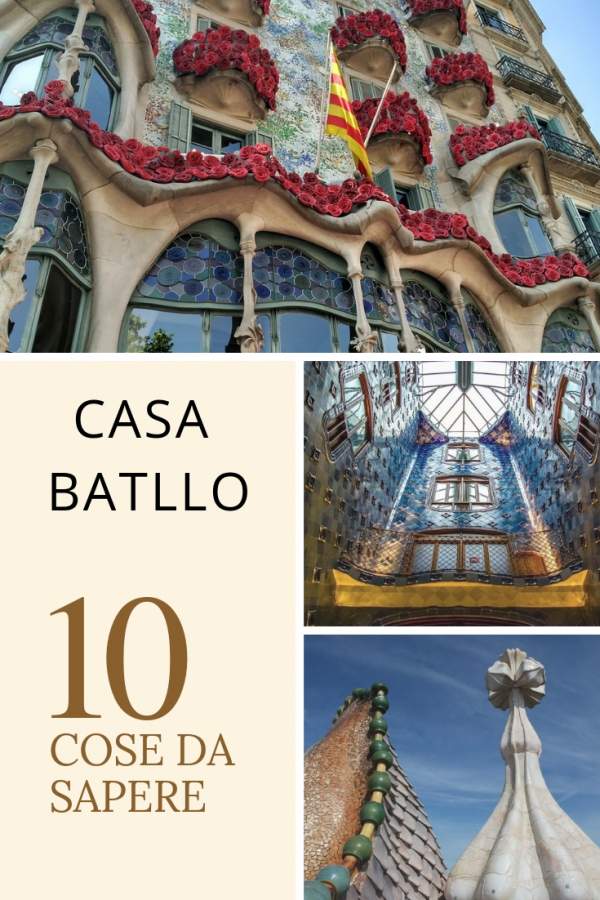 add a comment of Casa Batlló in Barcelona: 10 Things to Know Before Visiting it