When I was a little girl, one of the books that made me dream the most was “The Call of the Forest”.
The book, one of the most famous of the writer Jack London, tells the story of Buck, a beautiful dog who after being kidnapped is taken to the Klondike during the crazy gold rush. Buck will first discover the wickedness of human beings who will force him to become a sled dog, but later he will be saved by John Thornton and a deep love will be born between them. At the end of the novel, after having avenged whoever killed his friend John, Buck will follow the call of the forest by joining a pack of wolves and becoming their leader.

"There is a forest patience, stubborn, tireless, continuous like life itself." 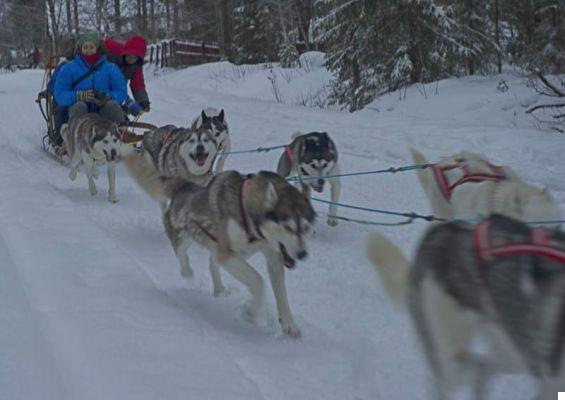 Our experience with sled dogs in Lapland

For years this book and the film subsequently created images of my imagination great adventures in the cold forests of the far north, so when I got the chance to experience a crazy dog ​​sled ride in Lapland I couldn't say no.

Since I love dogs very much and deeply hate those who exploit animals to profit from tourists, I was a bit skeptical at first and did not know if I would like this experience or not. My great fear was to deal with a tourist attraction where animals are exploited and poorly kept, or to relive something similar to experience to Isla Mujeres, in which I went back I would not set foot even dead, where the animals are kept only and exclusively for the pleasure of the tourists and the profit of the owners with no respect for the living being in question. But Isla Mujeres is not the only case where animals are exploited for human gain.

Other striking examples of animal abuse are a few Elephant Camps in Southeast Asia or the infamous Tiger Temple in Thailandia (which I would never visit even if they paid me). 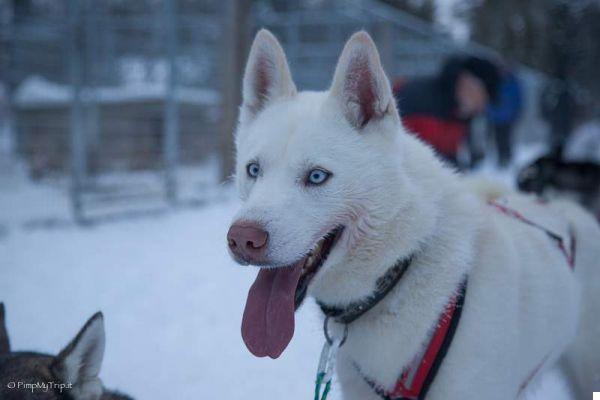 A beautiful Siberian Husky from the New Moon Husky Farm

One of the first things then that I asked Isabella del Country Life Lodge, who took care of organizing our sleigh ride, was if the choice of the Farm was a responsible and conscious choice in the panorama of tourist offers concerning the dog sledding. But since I don't think so until I see, despite Isabella's reassurances, the fear remained inside me until we got out of the car and got acquainted with the fantastic huskies of the New Moon Husky Farm (Nymanen), In the municipality of Arvidsjaur, in Swedish Lapland.

La Luna Nuova Husky Farm was born in 1990 in Luleå where both owners, Birgitta and Mikael were born. In the fall of 2007 with their 45 Siberian Husky Birgitta e Mikael si sono trasferiti a Auktsjaur a small village in the municipality of Arvidsjaur. 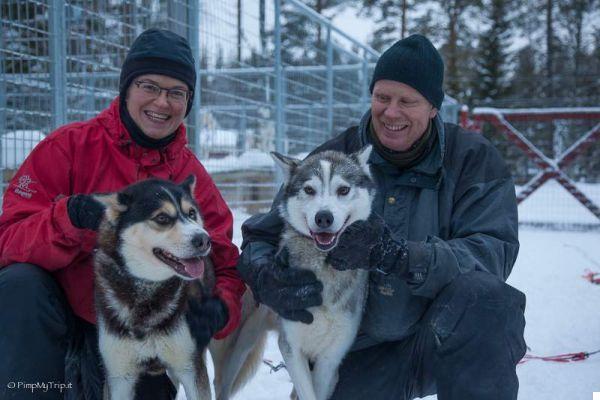 The first thing that immediately catches the eye is that Birgitta and Mikael literally adore their dogs not only for how well they are kept, clean and fed, but also loved to the point of moving house to a more suitable place for them.
One of the other questions I asked myself was whether dogs were used to pull the sled. This experience taught me that some breeds of dogs love to "work" with their owners: that huskies like what they do is immediately understood because as soon as they see the sled and understand that we are getting ready they begin to bark as if each of them was calling to be chosen.
Birgitta explains to me that huskies are very strong dogs and thanks to their physical conformation they have more strength than many much larger dogs: she chooses 8 dogs for each sled even if, she tells me, they could be less and not struggle anyway.

Birgitta prepares the sled for our adventure in the forest

In Lapland winter is a special season and whizzing through the snowy trees aboard a sled pulled by these beautiful huskies is one of the things to do at least once in a lifetime. Birgitte and her dogs are an extraordinary team and the sweet tone that Birgitta uses with them is evident, especially with the beautiful and balanced Lo, the leader dog of the group and how they react to her encouragement by putting even more energy into the race: us, despite the cold stinging our face, we are able to fully enjoy the silence and tranquility of the surrounding nature, the woods and the wide open spaces. We sharpen our eyes in the hope of finding some wild animals, reindeer, moose and various varieties of birds. 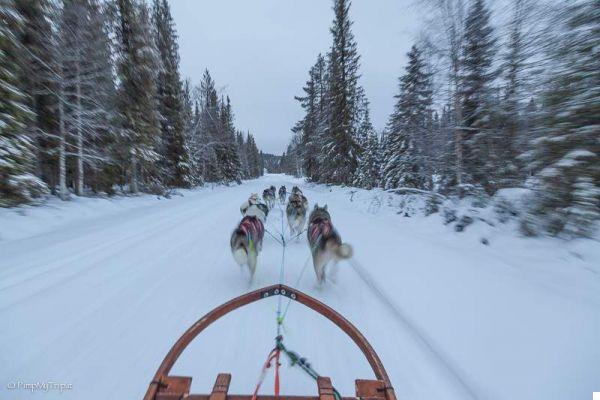 The tour lasts almost two hours during which we stop to let the dogs rest: I take advantage of the break to ask Birgitta a lot of questions and learn more about her and her life. I discover that she has quit her job to be able to spend 24 hours a day with her dogs: she looks at me with a smile and tells me that she could not go to work and not be there in case one of her huskies needs her. 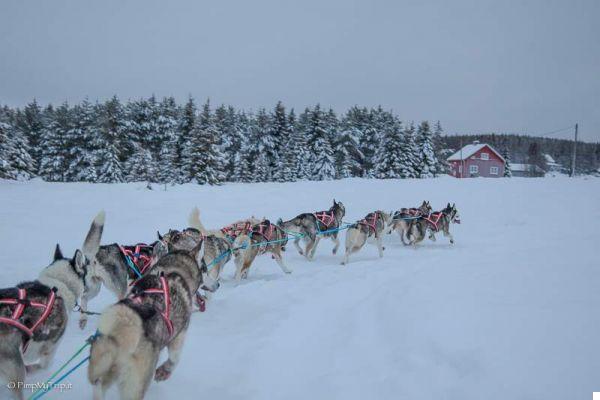 Running happily on the snow!

Every day he takes them out so they can run and after the winter season he leaves them a period of absolute rest so as not to strain their muscles too much and to make them recharge their batteries. In late June he starts training with them. She has a sled with wheels so that she can train even when there is no snow: later in her house we will discover that Birgitta participates in many sled races and that she has won numerous important prizes.

Upon returning, as soon as they arrive, Birgitta and Mikael's priority is to check that all their dogs are okay, that they have not had problems with their paws and that they all have fresh water at will, then we can sit around the stove to sip a cup of tea. hot and taste some desserts that have been prepared especially for us. 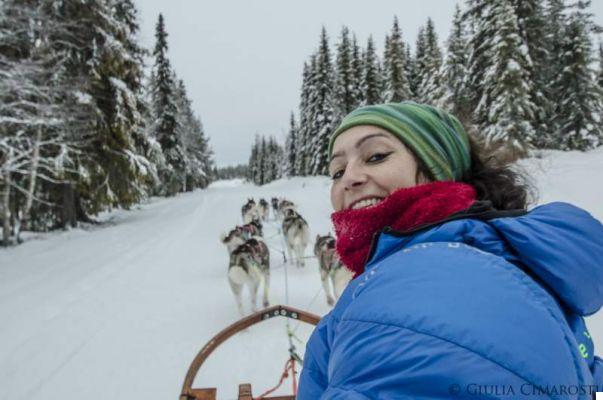 This experience as well as one of the most romantic of my life was an excellent opportunity to learn a lot about Siberian Husky and their attitudes. I also learned that the dog sledding it can be a sustainable tourism activity if done with the right people: not all those who offer this activity are people who take care of their dogs like Birgitta and Mikael, unfortunately here too bad apples exist and for this reason it is very important to spend of time in finding the right Farm and making an informed choice. 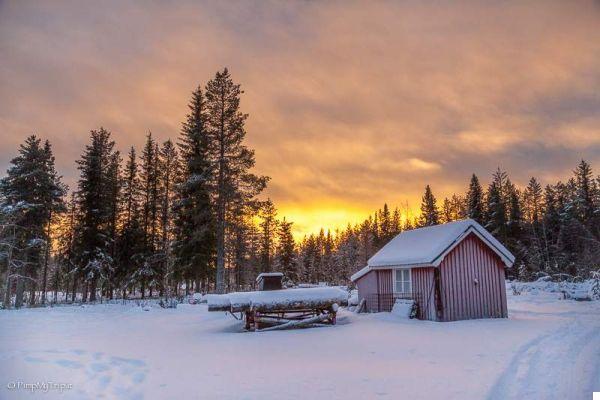 A fairytale setting near the Launa new husky Farm

Below you will find all the references to contact La Luna Nuova Farm and live with them in a responsible manner your wonderful adventure with sled dogs.