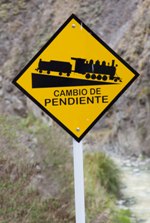 Each trip holds exciting surprises for travelers and, at times, even a few small disappointments.
After 'frustrating experience in China on HuaShan mountain,  in Ecuador the bitterness in my mouth left me the train journey along the thrilling railway that descends from the mountain renamed Nariz del Diablo, and which, due to its history and the conformation of the territory, has been defined as the most difficult in the world.

I particularly want to tell about the disappointments while traveling because I think the role of a travel blogger is to write the truth about the places he visits for better or for worse.
This article will be less romantic than many internet stories, but at least, if you have the patience to get to the bottom, you will know what to expect if you decide to come to the "Devil's Nose".

But what exactly is the Devil's Nose? It is a mountain of 1900 meters that has earned this name due to the overhanging sides, jagged as if they had been stripped by nails, which is exactly on the route between the two train stops, between Alausì e Catch us.
During the construction of the great Guayaquil-Quito railway network that would connect the coast to the Sierra, the engineers who found themselves facing this difficult stretch had to find a solution to overcome the impossibility of making the train "run". 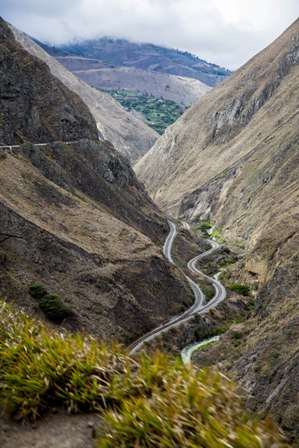 The ingenious solution was to devise a zig-zag path for which the train to change direction proceeded for a stretch along a dead track and then backtracked the next stretch along a track of 2km and with a difference in height of 800 meters. The work lasted a year with an enormous cost especially in terms of human life: workers and slaves were hired, blacks, indigenous and Jamaicans, many of whom died due to extreme climatic conditions, yellow fever and snake bites. The bodies were buried in a mass grave at km 106.

The breathtaking journey along the Nariz del Diablo starts from the nice village of Alausì characterized by streets closed between rows of colorful houses and people dressed in traditional clothes that crowd lively bars and shops.
The station, which is located exactly at the end of the main street, is equipped with a nice café and a large room furnished with stalls that display not only local handicrafts, but also magnets, T-shirts, key rings, all depicting the famous train.

Already at the first glance at the train I understand that I am about to get the biggest rip-off of the whole trip to Ecuador: instead of the
old and shining ironwork I have in front of a brand new reconstruction with flaming carriages and touring seats complete with a small table in imitation wood, shiny as just out of the shop.

Unfortunately it is no longer possible to face the descent along the Nariz del Diablo sitting on the roof of the train. Since 2009, after a serious accident, the government has banned this old custom. 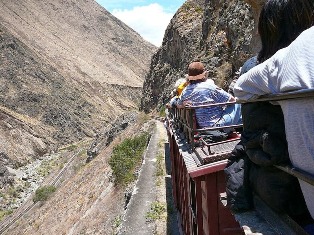 The peculiarity of the train, the reason why it is so famous, is that it descends overhanging the entire route without ever turning. In practice, if you are as loser as I am and you are assigned the place on the upstream side, while on the downstream side a runaway herd of tourists masses on the windows to look out and take thousands of photos, in the end the terrible descent is reduced to a skimpy train ride, without seeing an accident for the whole duration, from start to finish.


And not only that, you don't see anything even when you return.

Downstream, after a 10-minute stop for photographic purposes, the train stops at Sibambe station. In Sibambe there is no village, there is nothing, only the station.

Here one is forced to stay for an hour, before the train turns back.
In the station there is a cafeteria (they offer breakfast, perhaps to silence the guilt of those who have the courage to charge the 25 dollar ticket) and a circular building that would claim to be the train museum (in but the panels with the history of the train and the photographs are nice).


In all this, the usual stalls could not be missing, the boy with the bowed llamas who for 1 dollar lends himself as a model for photos, the ride in the round on horseback always for a fee and the very fake show of traditional dances at the end of which irremediably ( and how could it be otherwise?) are asked for money.

In practice, a trap whose sole purpose is to pluck the unaware tourist who comes here to find authenticity and is instead in a sideshow organized ad hoc. 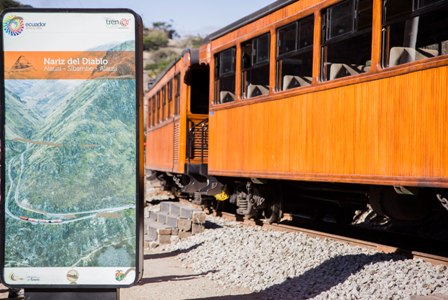 I had to get angry but at least on the way back I got to be moved to the side
"right" of the train. Looking outside, the journey is certainly more pleasant, beautiful views, although it is faster (they warn us that the return train goes faster if not how do they make as many trips as possible and catch as many tourists as possible?) and in no time at all we arrive at the Alausì station. All for a total of two and a half hours.

Throughout my trip to Ecuador I have thought that this country is doing a lot to increase tourism.
But if the idea they have is to turn authentic things into a kind of purposeful playground
only to the ruthless gain then, forgive me, but I think they will not go far.

Not that I mean by this to those who find themselves passing through here not to make the long descent the Devil's Nose, now that you are there you might as well take your curiosity off, but if you plan to come on purpose to try the thrill, listen to me, go somewhere else.

“Me and Ghana” interview from a small unknown village ❯

add a comment of On the train on the "nose of the devil", the great disappointment