Best things to do in the neighborhood of Triana

The Triana neighborhood is one of the most characteristic and suggestive of all Seville.

Known as the birthplace of flamenco, as a neighborhood of artisans, singers, dancers and bullfighters, Triana enchants tourists and curious travelers from all over the world.

Its authentic atmosphere, the views of courtyards and old houses, the Guadalquivir River flowing under the famous bridges that connect Triana with the historic center of the city and the old tile factories, tell a millenary history and reveal the popular soul of the neighborhood.

During a visit to Seville, this is definitely a must-see.

Read also What to see in Seville in 3 days

The best way to get to know the neighborhood of Triana is to get lost in its streets. Walk without a particular destination and discover the most characteristic corners of this Sevillian neighborhood.

Below I recommend what to see in the neighborhood of Triana in Seville.

How to get to Triana 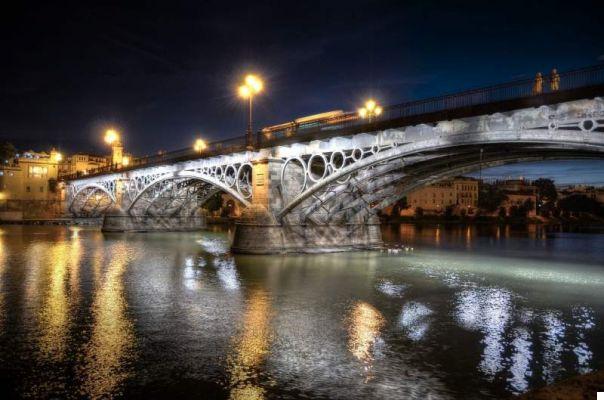 Once in the Andalusian capital, you can reach Triana by crossing the Puente de Triana or the Puente de Isabel II, the oldest iron bridge in Spain.


Another crossing point is the Puente del Cachorro, which stands out for its particular umbrellas. On the right side of the bridge is the Islade la Cartuja, which was the site of the 1992 EXPO and today houses the Isla Magica amusement park.


What to see in Triana 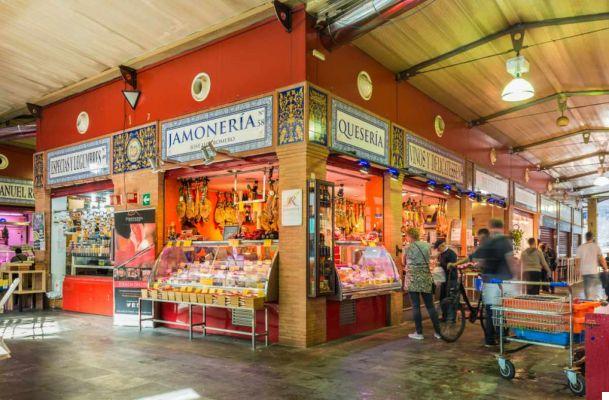 The Triana Market is one of the most interesting, characteristic and authentic places in the whole neighborhood.

That is why your visit, in my opinion, should start here.

The market was built in 1823 on the ruins of the old Castillo de San Jorge. In the early 2000s it was restored and modernized, but the spirit remains authentic and original from the past.

A little bit of everything is sold here: from fruits and vegetables, to meats, fish and bread. Inside there are also a few restaurants and bars: this makes it a great place to stop and have a snack, taste some local tapas or enjoy a genuine and cheap lunch.

On the lower floors of the market are the remains of the Castillo de San Jorge. The fortress was built by the Visigoths, but its fame is mainly due to the sad years of the Inquisition.

Today it houses the Centro Temático de la Tolerancia, a museum that traces the history of the castle during the dark years when its rooms were used as a courtyard and prison for the Inquisition. 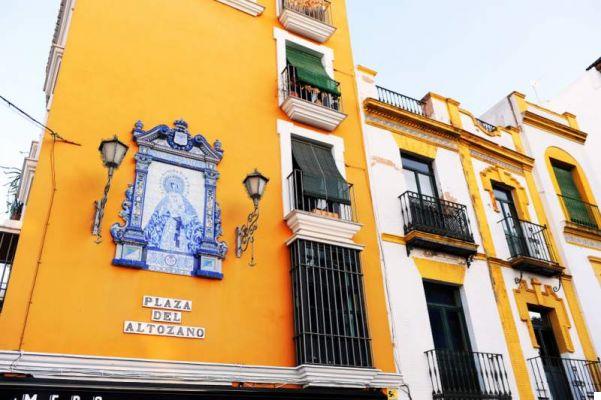 The Plaza del Altozano is one of the main squares of the Triana neighborhood: the market also dominates it.

In the center of the square you will notice a statue of Juan Belmonte, one of the most famous bullfighters of the city.

The Plaza del Altozano has always been a meeting place for flamenco singers. In the Triana neighborhood, in fact, the tradition linked to this music and dance is ancient and deeply rooted.


If you are interested in attending a flamenco show, Triana is the place!

One of the main reasons I recommend you stop at Plaza del Altozano, however, is to look at the characteristic miradores (glass and wrought iron terraces) of the houses.

A few steps from the Plaza de Altozano and the Market is another of the things to see in Triana absolutely: the Callejón de la Inquisición. 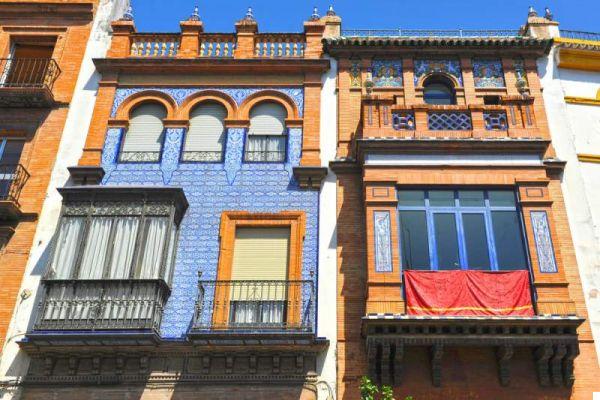 This is the main street of the Triana neighborhood, full of stores, tapas bars and typical restaurants.

From here I advise you to follow Calle del Alfareria where you will be immersed in small historic stores and palaces with colorful balconies.

The Church of Santa Ana is considered "the cathedral" of the Seville neighborhood.
The building was built in 1276 at the behest of Alfonso X. In fact, the King, after being cured of an eye disease, decided to thank Sant'Anna by building a new church in his name.

Inside, do not miss the magnificent altarpiece (the altarpiece) of the High Altar.

The Capilla del Carmen was built in 1928 by the architect Aníbal González, the same one who designed the magnificent Plaza de España in the center of Seville.

On the outside, above the dome, there is a small temple: inside are the statues of Santa Giusta and Santa Rufina, born and martyred in Seville, today are the protectors of the Cathedral and Giralda.

In what is the old ceramic factory of Santa Ana, today there is a museum and an educational center.

The Ceramica Triana Center retraces and recalls the importance of the work of the artisans of the neighborhood, but it is also a place where artists and potters continue to dedicate themselves to this noble and fascinating art. 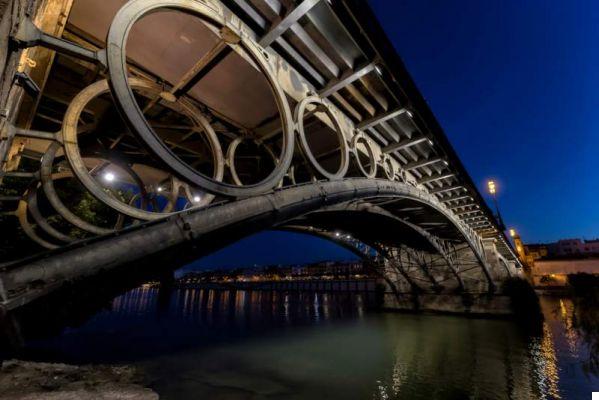 Puente de Isabel II is also known simply as Puente de Triana.
Today there are 18 bridges that cross the Guadalquivir, but this was the first to connect the two banks.

Initially it was an unstable wooden footbridge supported by a series of boats, the Puente de Barcas, in fact.

Work on the present bridge began in 1845 and the inauguration took place in 1852. In 1977, renovation works began that partially changed its appearance.

Today the Triana Bridge is one of the symbols of the city and the neighborhood. So I suggest you cross it on foot before soaking up the atmosphere of Triana.

Calle Betis It is one of the most famous streets for the nightlife of Seville: here are concentrated restaurants and bars of all kinds.

This is the right place to spend a fun evening of tapas and good wine, but it is also the perfect place to stroll along the banks of the Guadalquivir.

From here, in fact, you can enjoy wonderful views of the Torre del Oro, the Plaza de Toros and Giralda.

Where to stay in Triana: the best hotels 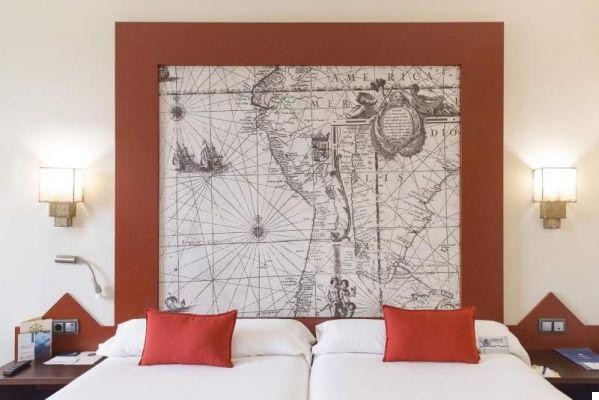 The neighborhood of Triana is an authentic cradle of legends and suggestions and is a very lively area thanks to the bars, restaurants and nightclubs.

For this reason it is one of the areas where to sleep in Seville that I recommend the most, especially for nightlife lovers and for those who are looking for a very "local" neighborhood.

Below are some of the best hotels in Triana.

Hotel Ribera de Triana - Located across the river from the center of Seville in Triana, this modern and trendy 4-star hotel is ideally located for exploring the neighborhood's attractions, within walking distance of the city's main sights.

It is also an excellent hotel for families and the rooms are large, spacious and equipped with all the amenities.

Monte Triana - This 4-star hotel is my recommendation for those who want spacious, bright rooms, free Wi-Fi, an on-site coffee bar and an excellent free fitness center for guests.

Hotel Triana Montalvan - The reviews for this hotel are exceptional.

B&B Casa Alfareria 59 - This fantastic bed and breakfast is surrounded by bars and restaurants and is within walking distance of the city's main attractions. So, if you're wondering where to stay in Triana on a budget, book a room here!

Cozy Studio In Triana - In case you prefer an apartment, this could be a great choice, especially if you are 3 people.

Backpackers Triana - This hostel has a beautiful rooftop terrace where you can admire the city and make new friends. Probably the best choice for young travelers.

Where to eat in Triana

As I said before, one of the places you should definitely go to eat is the Triana Market.

Bar Amarra: Located in the heart of Triana, Bar Amarra has been a local favorite for years. Their fish is among the best in Seville fresh and perfectly cooked. Try the tortillita de camarones, washed down with a cold beer.

Bodeguita El 24 has earned a reputation as a quasi-institution in Triana. This simple, no-frills bar specializes in small montadito sandwiches.

Las Golondrinas: Busy tapas bar, one of the best known and most famous, an institution in Triana. Locally renowned for its tip of solomillo (spicy pork tenderloin sandwich) and champiñones (sautéed mushrooms with mint sauce).

I advised you what to see in the Triana neighborhood in Seville, but I want to give you one last piece of advice: explore this neighborhood without rushing. Only then you will be able to savor its authentic atmosphere and capture its real soul.

The 11 Best Things to See in Guatemala ❯