Winter in the Laccadive Islands

Author and references
Winter in the Laccadive Islands

They look like bright stars immersed in the blue of the sea overlooking the Indian Ocean, they are the Laccadive Islands (Lakshadweep). The name of the archipelago says it all, translated it means one hundred thousand islands, many and all scattered in the splendid crystalline waters off the coast of India.

It is a continuous succession of atolls, coral reefs, uninhabited islets and green islets surrounded by a white sand frame. It is the ideal destination for those who want to immerse themselves in the colorful seabed among the corals, but also for those who want to spend our cold winters warm away from the chaos of hectic life. 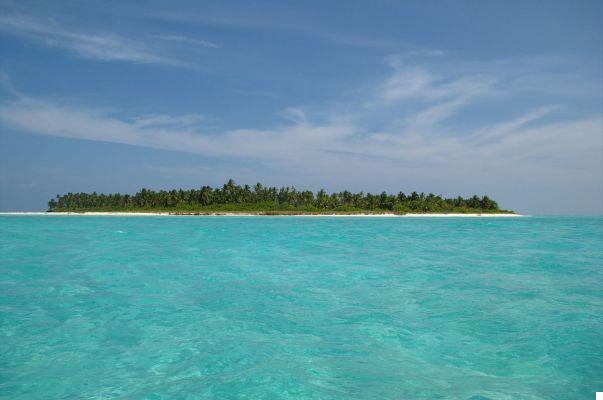 The Laccadive Islands are a somewhat unusual destination, not very frequented by mass tourism, but true terrestrial paradises still uncontaminated and in a small part inhabited by the Indian people. You can reach them with an Air India flight arriving at Cochin airport (COK) and from there with an internal flight to Agatti island.

The vegetation, the sea and the coral walls a stone's throw from the beaches are still in excellent condition as they are little exploited. Life on the islands has a leisurely pace, there are no large hotel facilities, resorts on the main islands are run sparingly and contain few places. The resort in the Bangaram archipelago, one of the most beautiful, has reopened its doors after a period of closure for the management of its assignment, for information or reservations you can contact the resort directly via their website page. The nearby Agatti and Kadmat offer visitors bungalows housed directly on the beach in the shade of tall coconut trees. A valid tour operator will offer you all the updated information on the accessible islands, in the meantime you can get some ideas on the official website and keep up to date on the news. On the tour packages page of the same site you will also find interesting five-day mini cruises organized by the company that deals with tourism promotion in the Laccadive.

The Laccadive Islands are also the ideal destination at the end of a trip to India for a relaxing break before the flight back home.


When to go to the Laccadive Islands?

From December to April, the tropical climate of the Laccadives is at its peak. Temperatures that are around 30 ° C the maximum and 23 ° C the minimum and rainfall ranging between 2 cm in February and 8 cm in December, it is practically the perfect destination to undress in the warm sun of the tropics and swim in the waters. coral reefs of the Laccadive Sea. Avoid the period from May to November when the monsoon rains break out.

Dream honeymoon on a cruise ❯

The bad: the negative feelings that the trip to India left me

add a comment of Winter in the Laccadive Islands