In this post you will not find any photographs of the ghats of the cremations of Varanasi, taking pictures is forbidden and disrespectful. But like all things in India it is enough to pay the right person and magically then everything becomes allowed. For my personal decision, even if I could have done it, I chose not to photograph the same. 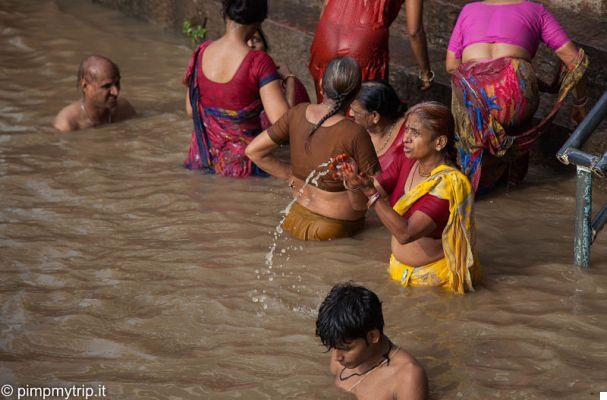 "What should I do with what does not make me immortal?" Maitreyi a Yajnavalkya, Upanishad

250 kg. of wood are needed to burn a medium-sized body.

One kg. of wood costs about 5 rupees.

The total cost of a cremation is therefore around 1000 rupees. More or less 15 euros.

The time needed to finish the work is about 3 hours.

Il Manikarnika Ghat, the main burning ghat in the city, works day and night, 24 consecutive hours, 7 days a week, monsoons and holidays included, and about 7/250 people are cremated every day.

I am at Varanasi , the holiest city for Hindus. To die here means to break free from the cycle of rebirths and reach Mokhsa, what Buddhists call Nirvana.

Its ghats, the stairways that descend to the Ganges, the goddess Ganga for the Hindus, are always crowded with faithful who, especially in the warm morning light, purify their bodies by performing ablutions and immersing themselves in the sacred waters of the river.

One of the stories of the Manikarnika ghat is that Parvati, Lord Shiva's wife, lost one of her earring while taking a bath and asked her husband to look for it and not leave until he found it. Lord Shiva never found it and legend has it that whenever a body burns, Lord Shiva asks the spirits if by chance they saw his wife's earring.

Alongside the piles of wood and scales, there is a multitude of hairdressers and barbers.

Ashok, a boy who introduces himself as a guide, explains to me that the one who has the task of starting the fire is the closest relative of the deceased. He wears a white tunic and must shave to zero, beard and hair. Muslims, however, leave a very small lock of hair in the center of the head.

I observe that the body of the deceased person is placed on a bamboo litter and wrapped in bright yellow and orange fabrics, while the bearers, who belong to the Untouchables caste, sing the joyful song "Rama Nam".

Once on the banks of the river, the face is uncovered and sprinkled with infinite care with drops from the sacred river.

Around the piles from which a thick smoke rises, the cows continue to stir among the waste in search of food, the children shout excitedly holding their cricket bats and the tourists observe with morbid curiosity all more or less visibly frustrated, some by the spectacle that it takes place in front of their wild eyes, others from not being able to take pictures.

The two representations of life and death run on two parallel tracks and one seems the natural evolution and complement of the other.

There is no antithesis, no contrast. They belong to the same design.

And in fact there is no manifestation of pain.

Indeed, there is a certain frenzy in the codified gestures with which the pieces of wood are arranged on the body of the deceased.


The closest relative arrives at a certain point with a bundle of brushwood, lit with the fire of Shiva in the sanctuary next to it and makes 5 turns around the joint, 5 as many as there are elements. And finally, with a precise and solemn gesture, he sets fire to the pyre.

“Crying and expressing pain is not allowed because it would interrupt the journey of the deceased towards his liberation,” Ashok explains to me.

Only 5 exceptions are allowed in the Hindu world to the iron rule of cremation: children under the age of 12 because they are innocent, women pregnant for the same reason, sadhus because they have no sins, the dead by bite of the cobra and the lepers because both are manifestations of Shiva.

All of them are tied a boulder around their necks, are carried offshore in a boat and finally thrown into the Ganges. Cows also enjoy the same privilege.

Ashok points out a tall building next to the ghat.

It is the most opulent house in all of Varanasi, so he explains to me.

It belongs to its richest inhabitant.

He is the owner of the cremation ghat.

He is an Untouchable.

In the center stands a slender platform reserved for the highest caste, while the poor among the poor are burned in the nearby electric oven.

Suddenly a boy bursts into an irrepressible cry. She is in an out-of-control despair and repeatedly throws herself on the pyre of her loved one. He is the tallest of all but also the most fragile. Friends and relatives struggle to support him.


On the banks of the river the face is finally discovered: it is that of a young girl, with extraordinarily delicate facial features and a serene expression. He will be a little over 20 years old.

There are laws among men that transcend even the most inflexible religious dictates.

There are stubborn feelings and pains that find no justification or comfort.

In the evening I observe the columns of smoke rising from the ghat below and listen to the crackle of the wood as the wind brings me an unknown, indefinable smell. I am sitting on the terrace of my guest house sipping my usual frozen Kingfisher.

But in the whole day it is the only scene that I cannot compose together.

And, beer after beer, my mind takes flight.

The boundary between reality and fiction, between what should be and what instead is, between the iron logic of the West and the parallel world of Indian mysticism, becomes ever thinner, more and more nuanced and impalpable.

Sense of possession and non-attachment, tenacity of affection and abandonment, the true nature of human experience and the ultimate meaning of existence, all the great fundamental themes appear in my head, in a phantasmagoric and joyful anarchy.

And Varanasi performs another magic:

Right here, where death is omnipresent, I have never felt so attached to life.

Some more information on the Cremation Ghats 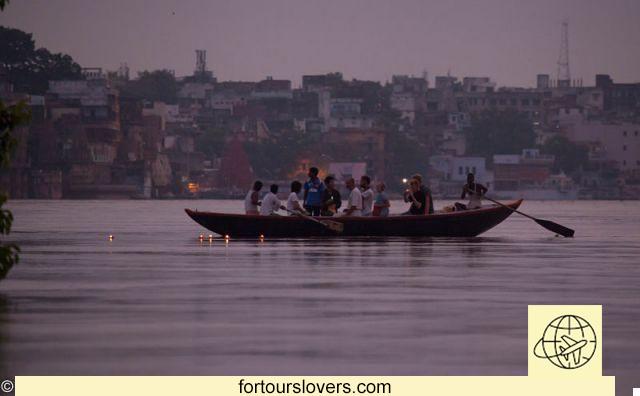 Since Varanasi (Benares) is believed by many to be the oldest city in the world, it is also considered the holiest on the banks of the Ganges. People come here from all over India to pray, get sacred water, do ablutions and even just to die.

Manikarnika ghat is famous for being the main cremation ghat in Varanasi.The second, smaller and intended for the poorest people is the Harishchandra Ghat.

Manikarnika Ghat is associated with the names of Lord Shiva e Lord Vishnu and according to Hinduism, being cremated here means interrupting the cycle of rebirths and reaching nirvana.
Manikarnika is also famous for the temple of Lord Shiva and Mata Durga which was built around 1850 by the maharaja of Awad (a region within the state of UttarPradesh) and for the sacred pond excavated (Cakra-Pushkarini Kund), according to the legends, by Lord Vishnu.

According to legend, this pond is even older than the Ganges itself.
Always the legend also tells that in this ghat, on a marble slab there is the Charanapaduka (the footprint) of Lord Vishnu who came here to pray for a long time.

The other side of the cremation coin is that, according to this CNN article, the continuous demand for wood is decimating the Himalayan forests: in India alone, between 50 and 60 million trees are consumed every year and the demand is growing. To partially solve this big problem, gas or electric crematory ovens have been built, but given the condition and unreliability of the electricity sources they are often closed and unusable.

Furthermore, not all families are able to afford the cremations and the wood needed to burn an entire body. Many bodies are then thrown into the Ganges only partially cremated or not completely cremated.

Estimates say that around 100.000 bodies are thrown into the Ganges every year.

Note: when I decided to write a post on ghats of cremations in Varanasi I realized that it was a subject to be treated with extreme delicacy. Delicacy and insight that I did not think I possessed. I then asked my friend Fabrizio Nicoletti for help. Fabrizio is an expert on India (where he spent many months) a writer, but above all a great traveler. This post is mostly his work.

Fabrizio wrote a beautiful book (which I have read so trust me) "I like India, 15 months between saris, sadhus and smartphones" and found at this link.

The Best Hammams in Marrakech ❯

Winter in the Laccadive Islands

add a comment of The Cremation Ghats in Varanasi: Manikarnika and Harischchandra