Author and references
Holi: the festival of colors. But where? And when? 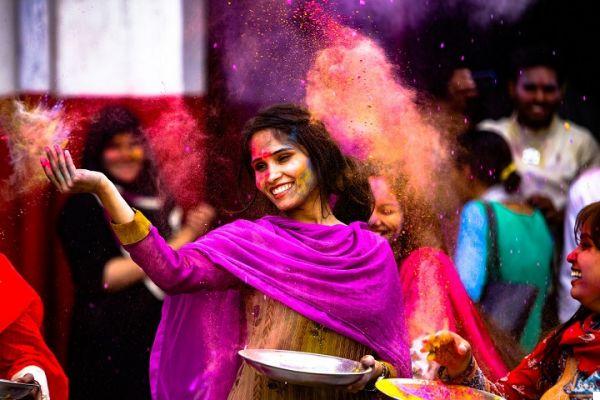 La "Victory of good over evil" is the main reason why we celebrate the Holi Festival, the Indian festival of religious origin. Throughout India, from north to south, the night before the great day people pray through Hindu rituals in front of a great bonfire that all the evil they carry within will be burned by the fiery flames of the great bonfire. The next day we celebrate the success of the victory of good with a party that goes on all day and is characterized by great joy and an immensity of colors. Colored powders (gulal) fly which like multicolored clouds rest on the head, on the clothes, on the skin of the people, fall to the ground and fill the streets with a magical and playful light, different from the usual everyday grayness.

There's a'ancient legend that tells the origins of Holi and speaks of one of the worst evils: the hatred of a father towards his son. The demon Hiranyakashyap conspired with his sister Holika to kill their son Prahlad. Prahlad's only fault was that he was a great follower of the deity Vishnu, rather than his father (great immortal demon). However, the mission was unsuccessful and the son was saved by Vishnu's grace as his aunt was consumed by a bonfire.

But when is the Holi Festival celebrated?


The festival lasts for two days, precisely one night and the following day during the spring. There is no exact date on the calendar, because the festival takes place on a full moon night and follows the Hindu calendar. But usually Holi night falls between the end of February and the beginning of March. In 2020, the days affected by the Holi festival are 9 and 10 March.

It all starts in the evening with a large bonfire to store and eliminate all evils that torment the soul of every person who participates in it. A pot filled with new barley seeds is placed under the wood pyre. While the fire burns the seeds, people consume them. Forecasts are often made about the future harvest based on the condition of the seeds or the direction of the flames. The ashes from this fire are considered a good omen and often, with the smoldering wood fragments, are brought home. The Indians light the fires of their homes with these embers and store the ashes that will protect them all year round against ills and diseases.

The day of the festival starts from early morning with songs and sounds, people flock to the streets of cities or villages, the air is filled with colors, we meet with friends and relatives and color each other, we also play with water and abound with sweet delicacies of the party. 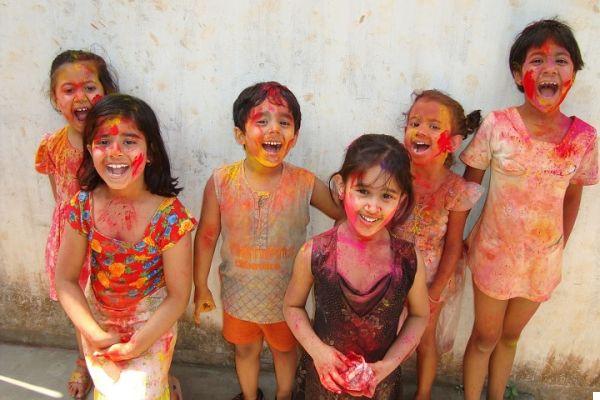 And where is the Holi Festival celebrated?

Holi is an important festival observed throughout India. Generally themore festive atmosphere of the Holi Festival is located in Northern India, especially in the Tourist Golden Triangle of India (Delhi, Jaipur, Agra). The festival is more vivid and jubilant than that of the southern part of India, which is quite solemn and more focused on religion and rituals in temples. However, the Holi festival is celebrated in every corner of the city, so don't worry about missing the event.
The Holi festival is honored with different customs and celebrations in each region of India differently. In the rest of the country, therefore with the exception of Delhi, Jaipur, Agra where the festival is also reserved for tourists, the festival is mainly celebrated by the local people. We believe that these are the most authentic Holi Festivals.

In recent years the Holi festival for its uniqueness and the festivity of the event is also celebrated in other countries of the world, even in the West, certainly losing the authentic reason for the celebration. But the colored powders and the healthy rebellion against the usual principles of coexistence are winning more and more followers, with that pinch of playful madness that only the Holi Festival can reserve.

The emerald and topaz colors of Nosy Be ❯

add a comment of Holi: the festival of colors. But where? And when?