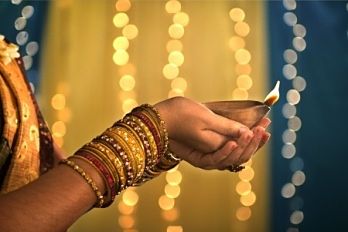 Il Diwali, also called Deepavali or Dipavali, is one of the most important holidays in all of India and is generally known by the name of "Festival of Lights": during this festival, which lasts 5 days, it is customary to illuminate one's houses, shops, courtyards and roofs with diya (traditional candles or oil lamps).
The word Diwali itself comes from Sanskrit and means "row of lights".
Hindus celebrate during this anniversary Ganesha, the elephant-headed god e Lakshmi, goddess of light, luck and wisdom.

This festival is celebrated by Hindus in the Hindu month of Kartik which falls between the months of October and November and celebrates the return of Lord Rama, full of glory and honors, in his hometown after 14 years of exile and the victory over the king of Lanka Ravana who had kidnapped his wife Sita (as told in the epic Ramayana). In the joyous celebrations for the return of their king, the inhabitants of Ayodhya, the capital of Rama, illuminated the whole kingdom with diyas.

Although Hindus and Sikhs like to see it as a celebration of life and take advantage of the occasion to strengthen family ties and relationships, in reality the most important spiritual meaning is "awareness of the Inner Light". 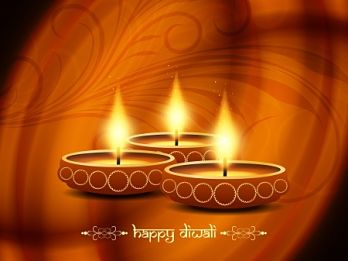 Central to Hindu philosophy (mainly Yoga, Vedanta and the Samkhya schools of Hindu philosophy) is the belief that there is something behind the physical body and mind, which  it is pure, infinite and eternal called "Atman". The celebration of Diwali as the "victory of God over the Devil" (or of Good over Evil) is in its deepest meaning a reference to the knowledge that dispels all ignorance, that ignorance that hides the true nature of each one, not as body, but as an immutable, infinite, immanent and transcendental reality. All this brings "ananda" (joy or peace).
Just as each of us celebrates our birthday, as the birth of our physical being, so Diwali is the celebration of this "Inner Light".

While the stories behind Diwali and the way of celebrating it vary from region to region (some regions use fireworks, firecrackers, lights, sharing sweets) the meaning, the essence, is the same, that is to rejoice in the Inner Light (Atman) and the reality behind all things (Brahman). 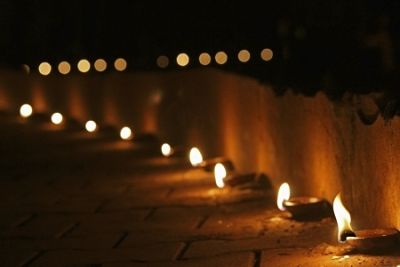 Diwali is celebrated not only in India but also in most of the countries of Southeast Asia: in these other countries, Diwali is more than a Hindu festival, it is a celebration of one's identity.

If you want to feel a little part of this event at least once, not only remain passive spectators, but if you are far from these countries, from the fireworks, from the sounds of Diwali, light a small oil lamp anyway, sit in silence closing eyes, focus on the light and illuminate your soul.

add a comment of Diwali: the Festival of Lights