Abu Simbel: What You Need to Know and How to Visit It

Built to stand the test of time, to pay homage to the pharaoh as a god, and to impress anyone who stands before them, the Abu Simbel temples they still carry out their task very well today, 3000 years after their construction. 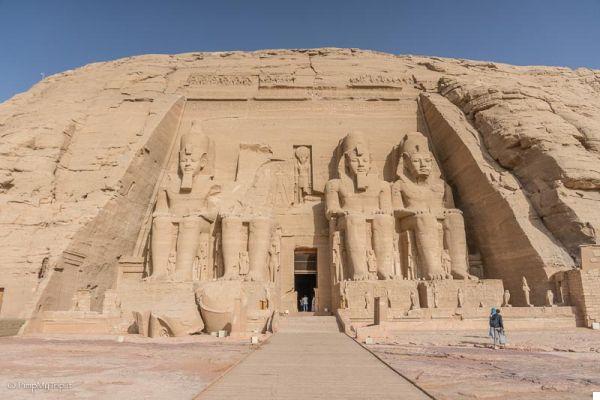 The Great Temple of Ramses II in Abu Simbel, with the 4 colossi at the entrance representing the pharaoh

Strongly desired by Ramses ii, Abu Simbel temples are one of the must-sees of each trip to Egypt.

After my two visits here (9 years apart!) I wrote the things you need to know. At the end of this post you will also find how to visit it, so you can avoid the rip-offs that alas I'm sorry to say, but in Egypt I'm always lurking around the corner.

In any case, the first moment you see the statues of the pharaoh will be a moment that will remain etched in your life forever.

1 - A brief history of Abu Simbel 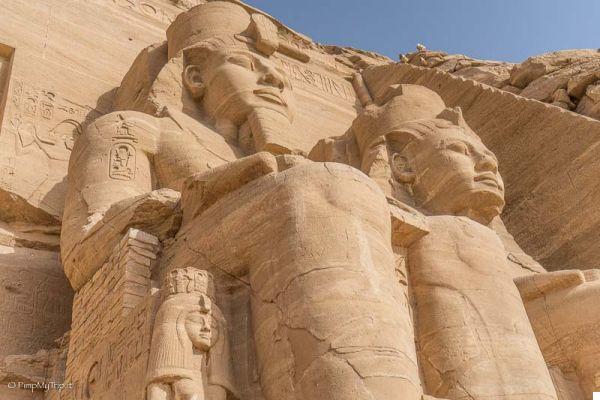 Il Abu Simbel temple it was strongly wanted and built by Ramses II to celebrate his victory against the Hittites in battle of Kadesh in 1274 BC
The temple was dedicated to a number of ancient Egyptian gods such as Ra-Horakhty, Ptah and Amun.

Abu Simbel was also designed by the pharaoh to be a testament to his power that was never to be affected by time.

That is why the impressive statues and the temple itself were built of solid stone.

Ramses, moreover (ok he was also a bit megalomaniac, let's face it), did not want his temple to be destroyed by future kings and he wanted make his position as a true god eternal. This is also one of the reasons why the temples to him and his queen Nefertari were placed so far away, to Approximately 280 km south of Aswan, near the border with present-day Sudan. 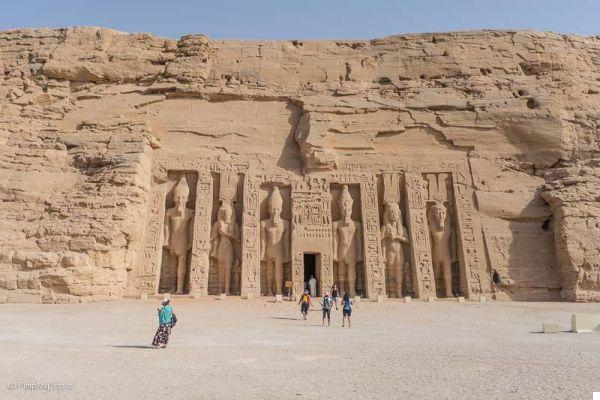 The Small Temple, the one dedicated to Nefertari, the favorite wife of Ramses II

And i Abu Simbel temples really remained intact, although the sand eventually covered them, erasing their memory until in 1813 the Swiss archaeologist Burckhardt (the same one who discovered Petra in Jordan, just to understand) found it in the sand. Work to bring Abu Simbel back to light began until the archaeologist Giovanni Battista Belzoni in 1817 he entered the complex for the first time.

Even today the temples of Abu Simbel fully meet Ramses' goal of to live
forever. 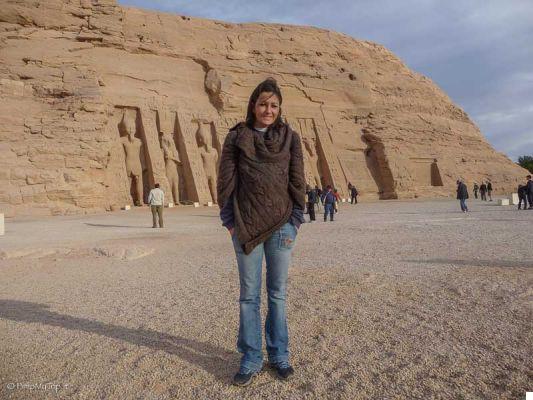 Me on my first trip to Abu Simbel

In search of a way to eliminate the scourge of floods and drought, the Egyptian government in the 60s he proposed to build the massive Aswan Dam.

In fact, the electricity supplied and the Nile flood guarantees would have helped the country, but the artificial lake (lago nasser) that was created behind the dam would have wiped out Abu Simbel.

So in 1964, the Egyptian government together with UNESCO started an incredible operation and decided it Abu Simbel displacement, saving him from the water of the Nile, 65 meters higher and 200 meters behind the original position.

Aided by UNESCO but also by a huge team of nations, including (I write this with a bit of pride) first and foremost, the mighty and seemingly immovable temple complex has been cut from the mountain, divided into blocks numbered one by one , moved and reassembled with millimeter precision where it is today.

When you look at it you don't even realize that what you are seeing is the transferred version, except for the mountain, man-made and built specifically for the incredible temple.

Abu Simbel is safe today on the placid shores of Lake Nasser and this is one of the things that I think makes it that way special - Abu Simbel is the demonstration of the miracles that can be performed with the international cooperation.

3 - What is inside Abu Simbel? 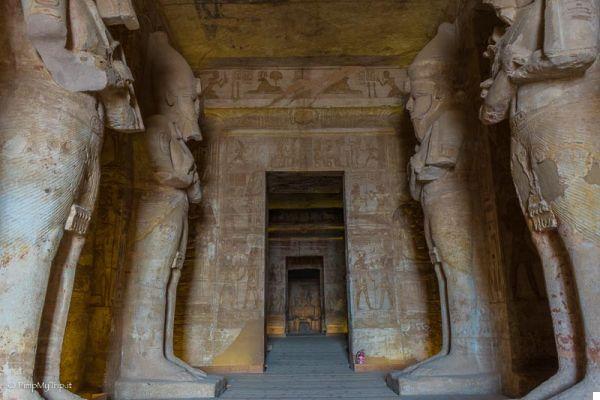 The interior of the Abu Simbel Temple

The Abu Simbel complex consists of two temples: the impressive main temple, the Great Temple dedicated to pharaoh and the smaller one dedicated to Nefertari, his beloved wife.

The Great Temple stands 30 meters high and 35 meters long and houses on the facade four colossi of King Ramses II seated on the throne.

All 'interior of the Great Temple there are hieroglyphs and drawings that tell the stories, the military victories of Ramses II, his personal life alongside the representations of ancient Egyptian gods. The whole complex is meant to worship him, to affirm his position as something other than man, and it succeeds.

Even 3000 years after its construction, it succeeds.

The small temple was built for the Egyptian queen Nefertari, the most beloved wife of Ramses II.

Located 150 meters from the Great Temple, also the Small Temple it has a facade with four great colossi, two by Ramses II and two by Nefertari.


The walls of this temple show images of the pharaoh and Nefertari praying to the gods.

Unfortunately camera photos are not allowed inside the temples, but that's okay, by the way the keepers are adamant. While, on the other hand, they let people take pictures with their mobile phones, don't ask me why, I have no idea.

Even though the complex is 3.000 years old, it has been badly neglected and then painstakingly moved, the artwork and details inside the temples are surprisingly alive, as if they were carved just a few days ago. 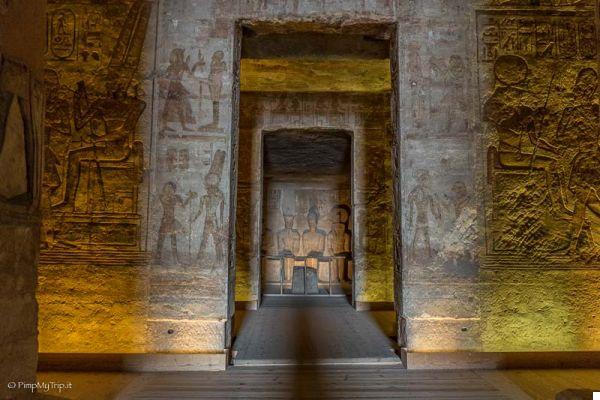 The Sanctuary, the most intimate room of the Great Temple with the 4 statues: here the "miracle of the sun" occurs twice a year, on February 22nd and October 22nd

Whenever we think of the prodigious monuments of the past such as Stonehenge, the pyramids of Giza e le piramidi maya del Mexico we cannot fail to notice the aura of magic that surrounds them.

Some are tombs, other monuments, but one thing is certain: the engineers and builders of the past spent a lot of time with their noses turned upwards, towards the sky.

Many of these monuments were in fact designed not only as a symbol of the sovereign's power, but also as a connection between earth and divinity.

The alignment of the Sun on the Great Temple of Abu Simbel is one of the cases of Ancient Egypt.

Inside, crossing the large rectangular room you reach the Sanctuary, the most intimate and secret part of the temple: a small room, four meters by seven, where the statue of the deified Ramses II is found together with the triad of Ptah (god of art and crafts), Amon-Ra (god of sun and father of the gods), and Ra (the hawk with the solar disk).

It is in this place that the so-called "sun miracle".

Twice a year, and only in these days, the rising sun penetrates the heart of the mountain and gradually illuminates the statues of the sanctuary, flooding them with light. It takes about twenty minutes for the light to pass. According to the ancient Egyptians, the sun's rays would have recharged the energy of the figure of the pharaoh.

The only statue that is never hit by the sun's rays is that of the god Ptah, in fact, he is also the god of darkness and the dead.

This phenomenon, before the relocation of the temple, took place on two particular dates: the 21 February when in ancient times agriculture and the cultivation season were celebrated, and the second the 21 October which celebrated the flood season. Both dates also reflected the date of birth of Ramses II and his coronation.

After the temple is moved, this phenomenon occurs with a day late: February 22nd and October 22nd.

The miracle consists in the fact that generally the sun only partially penetrates inside the temple and does not come to illuminate the statues, except in these two particular days. 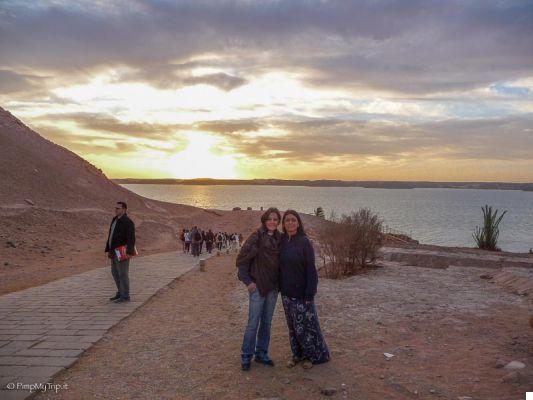 My first arrival, at dawn in Abu Simbel, now 9 years ago

Abu Simbel is located in the middle of the desert about 280km southwest of Aswan and just 40km north of the Sudan-Egypt border. There is a modern and well paved road leading to Abu Simbel from Aswan and there is also an airport just 6km away from the temples which was built especially for tourists.

Despite its rather remote location, reaching Abu Simbel is easy and there are basically 3 ways to visit it:

The fastest and easiest way to reach Abu Simbel is a volo from Luxor, from Cairo or from Aswan, where many tourists start or finish theirs Nile cruise. Flying over the desert and the vast Lake Nasser, with a little attention you can see the temple from above, a view that offers an exciting prelude to the visit.

There are daily flights from all 3 cities mentioned above and, once you arrive at the airport, there are buses that take tourists for free to the entrance of the archaeological site.

2 - with a private or collective tour from Aswan

The method I have used and the most popular of all is with a collective or private tour from Aswan. The cost varies, is around 15 euros each for a collective tour and 70 for a private one, but agencies and hotels can ask you even more, it depends on their fee and their honesty.

There are 3 ways to book these tours:

- buying oli on the internet for example with GetYourGuide. The cost is that and no one asks you for anything more.

- by purchasing them in a local agency one or two days before. Negotiate the price.

- by booking them directly through your hotel. Not all hotels offer this service and some charge it as expensive as blood.

I booked directly with my hotel on Nubian Holiday House and by the way if you want to stay a few days in Aswan it is a fantastic choice.

Habibi, the owner can also organize other tours for you like the felucca cruise on the Nile or the visit to the Nubian village.

The collective tours are carried out with minibuses that generally depart twice a day: at 4 in the morning or at 11. It takes about 3 hours to get to Abu Simbel (with a stop in a bar in the middle of the desert), two hours ( are enough) to visit the temples and another 3 hours to go back.

3 - with cruise on Lake Nasser

These cruises they operate on Lake Nasser from Aswan to Abu Simbel and their complete itinerary can last from 4 to 5 days round trip.

For those who think that a couple of hours are not enough to visit Abu Simbel or perhaps prefer to stay a few more days on the shores of Lake Nasser, below you will find the 2 best hotels.

Tuya Hotel: by far the one with the best reviews, this (very popular) hotel overlooks the lake, has wi-fi connection and private parking.

Nefertari Hotel Abu Simble: the name already speaks volumes, a 4 * hotel with rooms with a view, outdoor swimming pool, wi-fi, shuttle service to and from the airport, car rental.

Acatenango, camping on an active volcano in Guatemala ❯

The Best Things to See in Aswan in 2 Days

Khan el Khalili: How to Trade as a Real Professional

Hurghada tourist resort on the Red Sea in Egypt

12 Facts That Will Surprise You About the Pyramids of Giza

The Best Excursions from Sharm-El-Sheikh

add a comment of Abu Simbel: What You Need to Know and How to Visit It