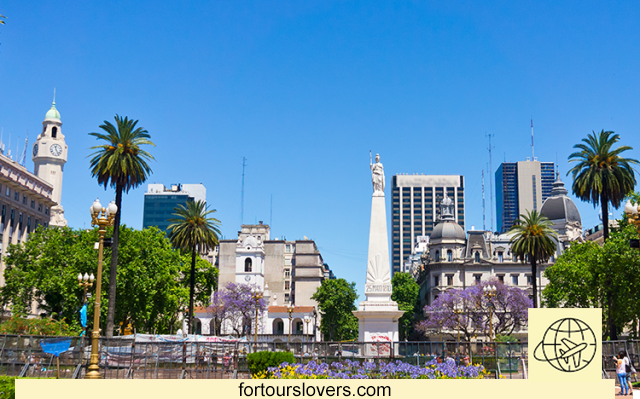 THEArgentina it is one of the countries with the most things to see in all of South America. The scenery in Patagonia, the snow-capped peaks of the Andes, lakes, glaciers and forests as far as the eye can see will remain in your eyes forever. Take some time for this extraordinary country: visit the cafes of Buenos Aires, the Paris of South America, spend a few days in Iguazu and Salta before moving to the Perito Moreno and the spectacular scenery that Ushuaia offers at the End of the World.

I loved this country and its people very much, who despite the bad times they lived have kept their smiles and traditions intact.

When to go: given the extension of its territory, there is no better time to visit Argentina. Surely to go down to Ushuaia, the city at the End of the World, the best time is summer than being in the other hemisphere corresponds to our winter. The period therefore goes from October to March April, trying to avoid the months of January and February which, being very high season, are the months that record the greatest number of visitors and prices rise exponentially.

Money, Credit Cards and ATMs: the official currency is the Argentine peso.

Practically anywhere you can withdraw with our credit cards, but it is not at all convenient given the cost of the transitions.

Safety: as in all the big cities of South America, Buenos Aires is not without risks: it is better to try to avoid some areas at night, such as the neighborhood of the Boca. Patagonia is pretty safe, but never forget common sense.

Public transport and transportation: Long-distance public transport (buses) are very convenient but expensive. If you have to travel long distances, it is better to opt for a domestic flight: it costs little more and saves a lot of time.

How much does it cost to travel to Argentina?

The difference in prices between the north and south of the country does not allow for a quick cost estimate. Traveling to Patagonia is expensive, and due to the insane inflation, prices are rising fast. Better to avoid if you want to spend a little less than going in the high season, in January and February, when prices are the highest of the year. The north is generally cheaper.

Hotels and hostels: in Patagonia the average price of a private room in a hostel is around 35-60 euros with a shared bathroom. Those traveling alone in Patagonia will have to adapt to spend even 25 euros for a bed in a shared dormitory. Hotels are more expensive, from 60 euros upwards.

In Buenos Aires, on the other hand, the prices are lower and you can also sleep in a hostel for 7/8 euros.

Restaurants: the price of the restaurants depends mainly on the location. In tourist places like Ushuaia, El Calafate o El Chalten a dinner in a restaurant without infamy and without praise costs 30 euros each, but if you choose to eat Empanadas on the street you can save a lot. It's also a good idea to buy food from fast food outlets that sell pizza or cook your own dinner in a hostel.


An all you can eat dinner of parillada (grilled meat) costs from 35 euros upwards.

Activities and guided tours: sore point. They are all expensive: an excursion to Patagonia costs from 60 euros upwards. For visit the Perito Moreno by public transport be prepared to spend 40 euros.

Prices reach exorbitant prices for some activities such as kayaking among the icebergs of the Upsala glacier which costs 400 euros each for a day. A wine tour in Mendoza costs from 100 euros upwards.

What to do and what to see in Argentina

Argentina is a huge country that really offers a lot, from the streets of Buenos Aires to the remote lands of Tierra del Fuego and then even further down to Antarctica.


in Buenos Aires: the Paris of South America, as well as the world capital of tango and a city rich in culture and traditions.Here everyone has fun, from music lovers to those who love culture and history to those who want to stay late at night in its milongas and in bars. A city to live relaxed!

Mendoza: the paradise of wine-lovers (including myself). Argentina produces a lot of wine and a visit to one of Mendoza's wineries is a must. A little expensive (more than 100 euros), but worth it. For wine lovers don't miss the Fiesta de la Vendimia which is held here every year in February and March.

Iguazu Falls: higher and twice as wide as Niagara Falls, it is precisely for this reason that Iguazu Falls have earned the name of "Niagara with Viagra". Many agencies organize tours from Buenos Aires, but the best (and cheapest) thing is to go there alone by bus.

Salta: a small colonial-style town full of cafes and tradition. Walking through its streets is a bit like a blast from the past. A mandatory stop between Buenos Aires and Mendoza.

Cloud Train: even if ridiculously expensive (from 180 euros upwards) this train ride in the Andes is truly spectacular. It is 400 km for a circular tour and in the 16 hours it will take you to travel it you will be amazed by the wonderful scenery of the Andean chain. It starts from Salta.

Bariloche: a somewhat unusual and mistreated destination Bariloche should be on the itinerary of anyone who loves trekking in nature in a place out of the ordinary. Ah his chocolate is very famous.

El Calafate and Perito Moreno: I don't think there is a need for introductions for the Perito Moreno and for El Calafate, the base from which to visit it. One of the wonders of our world. To enjoy it better, a good choice is to organize a trek among its ridges. Once you see it you will never forget it, you will forget its thunder and crackling that will make you "feel" how much the glacier is alive.

Trekking a El Chalten e Fitz Roy: the national capital of trekking and a paradise for climbers, with its Cerro Torre, one of the most difficult rock climbs in the world. I liked it a lot. Although the accommodations are expensive, in reality all the treks are free so shopping at the supermarket is one of the least expensive places in Patagonia Argentina. The trek to the Laguna de Los Tres is fantastic, but since the weather is often bizarre, it is better to plan to stay there for a few days so as not to miss the spectacular scenery offered by Fitz Roy.

Ushuaia: the end of the world, in all senses. Ushuaia is a little gem so squeezed between the snowy mountain ranges and the blue of the Beagle channel. From here the cruises to Antarctica depart, but even if you give up for the too high cost, I assure you that you will like it anyway.

Don't miss at least a day's trekking in the Tierra del Fuego National Park and the excursion to Esmeralda Lagoon.

Cruise on the Beagle Channel: from Ushuaia you can organize cruise excursions of a few hours on the Beagle Channel. They can be reached with the courier the lighthouse of the end of the world, the Bridges Islands with its cormorants, theIsola de Los Lobos, with the sea lions and to finish in a big way, theNavarino island with its pinguinera a beach where a large colony of cute and funny Magellan penguins lives in the summer.

Whale Watching and the Valdès Peninsula: from June to December the whales migrate to the coasts of Argentina for mating. even if a little expensive, the Whale Watching excursion in this period is extremely recommended as sightings are practically guaranteed.

Antarctica!: for those who have time (and money) cruises (minimum 1 week) depart from Ushuaia to Antarctica. Even if it is really expensive (starting at 5000 euros) it is the experience of a lifetime. Not for everyone of course, you have to adapt (there are many days of navigation with often rough sea) but once you do it you don't forget it for a lifetime. For me it will remain (at least for now) one of my dreams in the drawer.

When to go to Patagonia, Best Month, Weather, Climate, Time

Everything you need to know about the Perito Moreno Glacier

add a comment of Guide and Travel Tips in Argentina