Everything you need to know about the Perito Moreno Glacier

UNESCO World Heritage Site since 1981, the Perito Moreno glacier it is located in the Los Glaciares National Park in Patagonia Argentina and is considered by many to be the eighth wonder of the world, even if it is not included in the official rankings. After seeing it I can not help but find myself perfectly in agreement. 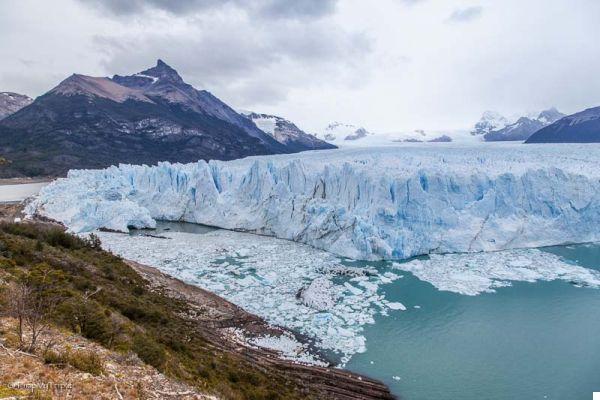 The Perito Moreno glacier ... so big that it doesn't fit all in the frame of the camera!

With an extension of 250 km², 30 km in length and a height of 74 meters above the surface of the Argentino lake (but the part under the water has a height of 170 meters) the Perito Moreno is one of the 48 glaciers fed by the Southern Ice Field, the third freshwater reserve in the world after the Poles.

Its main peculiarity is that the Perito Moreno is one of the three glaciers that (apparently) are not retreating: advancing about two meters per day, but losing its own percentage of ice through the breaking of large parts of its front, the glacier it maintains its proportions of mass and size over time.

The glacier owes this forward movement to a cushion of water that separates it from the underlying rock, thus facilitating its sliding. 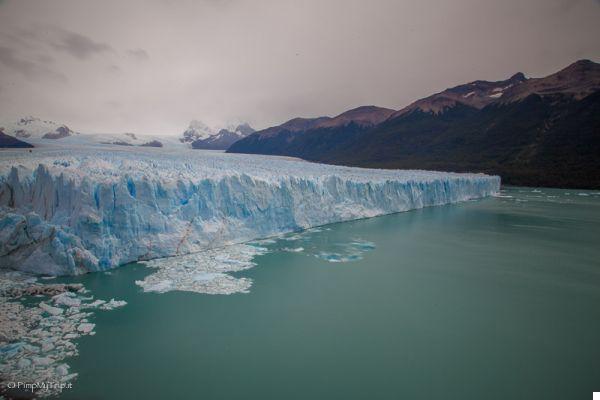 The front of the Perito Moreno on Lake Argentino

Apparently, yes I wrote apparently it is not retreating because in reality many glaciologists have noticed a lateral thinning which by some is attributed to global warming, by others to a natural glacier life cycle.

Every 4 or 5 years the glacier reaches the other shore of Lake Argentino, where there is a small peninsula called "Magallanes Peninsula”And forming a natural dam that separates the two parts of the lake. As a result of this, the water level of the part of the lake called Rico Arm rises up to 30 meters: the tremendous pressure that this mass of water exerts on the ice wall causes massive ruptures, leading to collapses of blocks and outward explosions of huge icebergs in the Los Tempanos Channel. 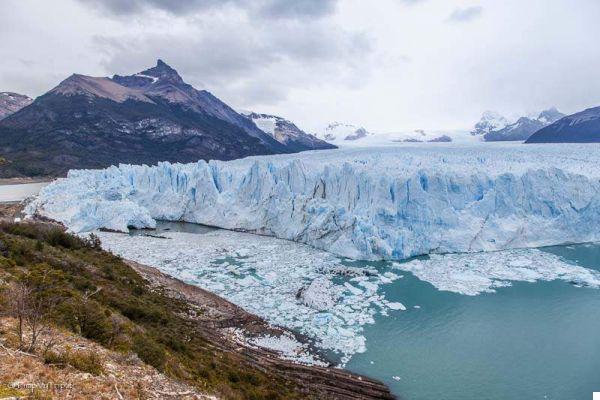 The Canl de los Tempanos seen from the Magallanes peninsula

A tip: before visiting the Perito Moreno, try to visit the Glaciarum to El Calafate, a very interesting museum on Patagonian glaciers that explains in depth their dynamics.

Origin of the Name

The glacier takes its name from the explorer Francisco Moreno, “El Perito”, one of Argentina's favorite sons, who played a very important role in the delineation of the international borders between Chile and Argentina.

Naturalist, explorer and geographer, he explored lands unknown to the authorities at that time and it was he who baptized the Argentino lake. Having become famous for the negotiations to draw the borders between Argentina and Chile, he was rewarded with a plot of land that he donated to the state: this gesture of his remained famous as it was the first step towards the creation of the Argentine National Parks system.


As a joke of fate, Francisco Moreno never saw the glacier that today bears his name. 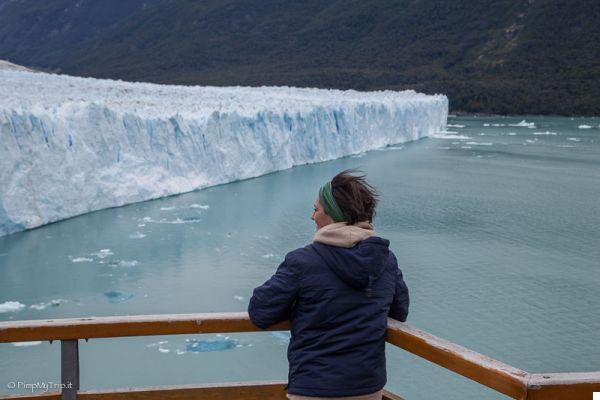 Surely the best time to visit the Perito Moreno is during theaustral summer (our winter) which runs from the months of November to March-April. Many advise against going there during the month of January because it is the month of holidays for the Argentine population and the month in which there is the highest number of visitors (the number of people who visit the Perito Moreno is about 100 thousand every year) and it could therefore be very busy.

The best time to visit the glacier is in the afternoon for two reasons: the first is that there is absolutely much less crowds, the second that due to the warming of the day it is easier to witness the breaking of the ice blocks. 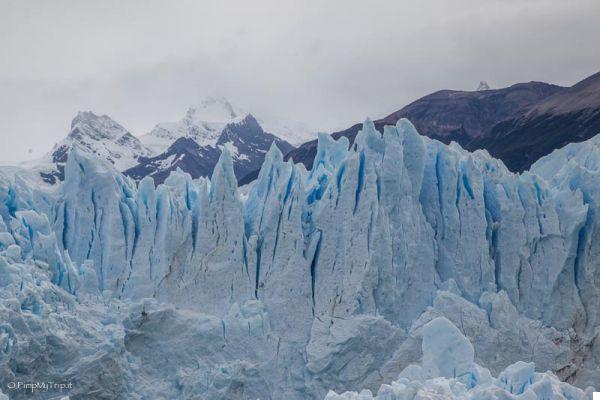 The Perito Moreno is located inside the Los Glaciares National Park about 80 km from the town of El Calafate, the main gateway to the park.

If you have rented a car, you can reach the glacier by driving for about an hour and a half along the provincial road n ° 15.

Alternatively, you can buy a day tour at one of the countless agencies in El Calafate (with pick-up directly at your hotel): if you don't want to beat yourself up too much, go to the agency and buy it.


If, like us, you want to save some money, you can get to the glacier directly by bus from the bus station which is one block away from San Martin, the main road of El Calafate.

There are several companies that offer bus transfers, but I recommend you Chaltèn Travel which also has an office on the main street of the city and accepts credit cards. Alternatively, you can go to one of the many company offices directly at the station and buy it there.

The ticket is 225 pesos per person round trip and since the visits last about half a day you can choose to go either in the morning (from about 7) or in the afternoon (from 13). We chose the second option and since almost everyone decides to go there in the morning I strongly advise you to do as we do so you will avoid the large crowd of tourists: after 18pm we were practically the only ones on the catwalks. The departure from Perito Moreno to return to El Calafate is at 19pm. 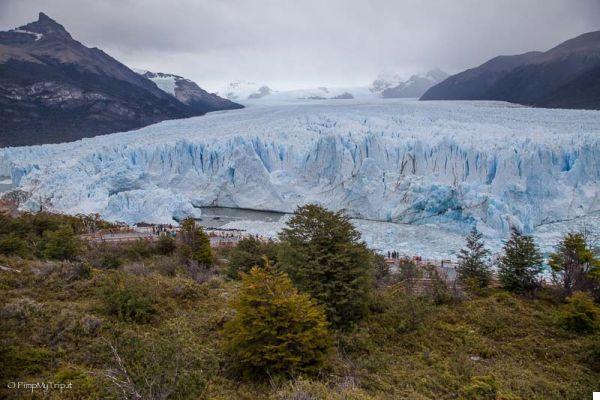 The catwalks. From the size of the people you have an idea of ​​the majesty of the glacier

The bus stops at the park entrance where a park ranger will board the bus and you will have to pay the entrance ticket (330 pesos strictly in cash) directly to him.

The bus will then continue along a beautiful road to the parking lot in the visitor area where there is also a café and you can buy things to eat and drink and some souvenirs. Beware that the cafe closes at 17pm so if you choose the afternoon option after that time you will not find anything (and not even a place to pee ... apart from the woods).

The path of footbridges leading to the glacier starts from the parking lot. The entire walk on the footbridges is completed in about 3, 3 and a half hours.

Visit on the catwalks

The bus dropped us off at the car park on the Magallanes peninsula from where we began our visit by climbing a series of footbridges that led us from the front of the glacier to observe the glacier from all its angles: right, left, from low and high. 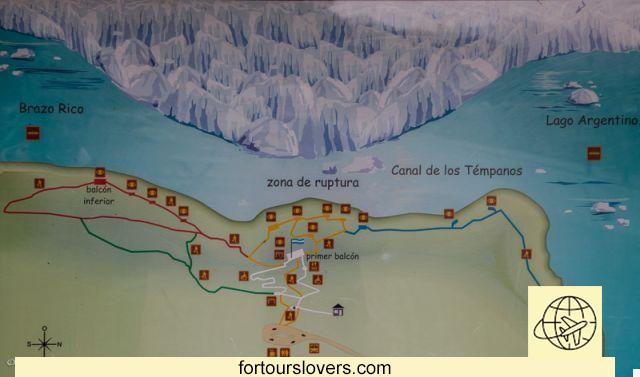 Map of the various paths of the walkways

Along the walkways, observation points have been created on which the crowd waits hopefully and with the camera in hand (me first of all) for another block of ice to come off. During the whole journey it is not allowed to cross or climb over the walkways to get even closer to the Perito Moreno. In the past, in fact, there have been deaths, as often the blocks are exploded by the glacier even many meters away and therefore there is the danger of getting one in the head.

In any case, the walkways pass really close to the ice front so there is absolutely no need to go further.

The Perito Moreno is truly impressive and not just for its size. It is also and above all for its sounds: during the whole journey what really excited me were the crackles, creaks, roars and real thunder that I felt came from the immense expanse of ice in front of me.

The paths on the catwalks are varied and divided by colors but communicating with each other. As long as you can stay to observe and listen to the glacier, in about 3 and a half hours you will have covered them all far and wide.

Trekking on the Perito Moreno

Walking through the streets of El Calafate you cannot fail to notice that all the agencies sell trekking on the Perito Moreno.

There are two types of trekking that can be done:

Minitrekking: the most popular trek for tourists visiting the glacier. It is about an hour and a half of walking in single file on the ice that does not require any particular skill or endurance. It can be a good option if you want to experience the thrill of walking with crampons and if you want to get a taste of the glacier from a different point of view: from above!

Unfortunately very touristy, a little too crowded for my taste and so I discarded it.

Big Ice: the trek that I would have chosen if it had had an affordable price. It takes a lot more effort than mini trekking, but you spend a lot more time on the glacier and therefore enjoy it a lot more. Much less touristy, it is an excellent choice if you have a good physical shape because it still requires more effort than minitrekking and is also much less crowded. Unfortunately for me the price was quite inaccessible.

For more information you can watch the Hielo & Aventura website.

Do you think I went to Patagonia and gave up glacier trekking? But not even for an idea! Except that I chose something a little more niche, I have been to do Ice trekking sul Viedma (another glacier still in the Los Glaciares national park but which can be reached from El Chalten about 220 km north of El Calafate). Here, at the same price as the minitrekking, I spent a whole day walking on the ice and also trying iceclimbing!

Another way to experience the Perito Moreno is with the navigation on the glacier front. Here too many agencies in El Calafate sell it, but if you want to save something you can buy the ticket directly in the kiosk from the visitor area where the bus leaves you (from the parking lot).

I have been to Perito Moreno twice: once in summer and once in winter. The second time I attended on this Musement tour that includes both navigation and a visit to the catwalks.

The navigation takes about an hour, perhaps a little more: navigating among the icebergs that take on all the shades of blue and blue you can imagine, you will arrive in front of the majestic ice wall more than 60 meters high!

How much does it cost to visit the Perito Moreno? 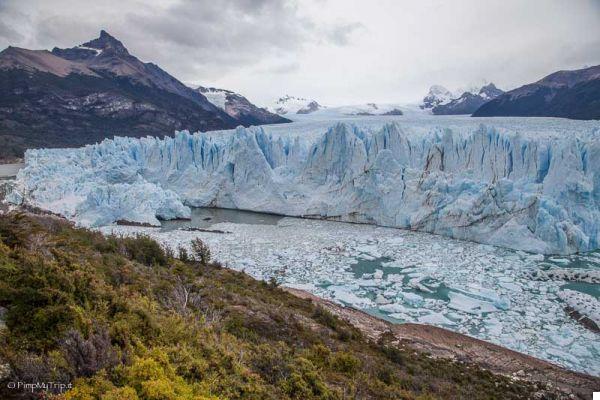 All the prices below refer to the period in which I visited the Perito Moreno in January 2017. Since the prices change very quickly, they will probably be increased when you go, so take them only as an indication:

Tax to be paid at the Bus Terminal: 10 pesos

Round trip bus from El Calafate terminal to the glacier: 225 pesos

Try to avoid (if you want to save money) buying food and drinks in the restaurant at the car park. Bring your own sandwiches and a bottle of water.

I hope you found what you were looking for in this post Perito Moreno glacier, if not ask me in the comments!

Update: the same year I returned to Perito Moreno a second time, this time in September during their winter

One day on the Chapada Diamantina ❯