Navigate the Beagle Channel to the End of the World

It is not every day that you find yourself visiting what is called the southernmost city in the world, Ushuaia. And when you finally get there one of the things not to be missed is sail on the Beagle Channel. 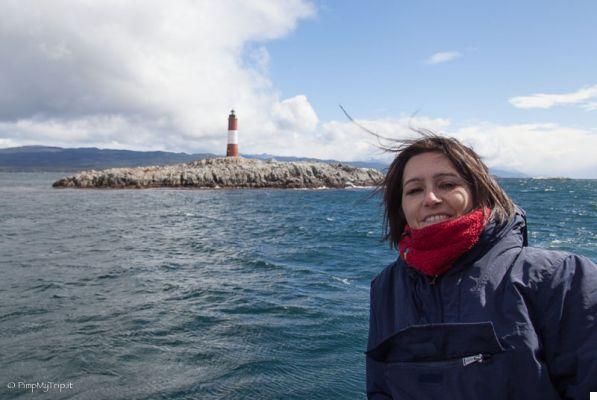 The day is gray and freezing cold in Ushuaia. Every now and then a shy ray of sunshine comes out that does not warm at all. Here even in summer it seems to be in winter, the wind is freezing, but due to some divine intervention, the sea in the channel is extremely calm, which is quite rare.

Around 3 in the afternoon, after a hearty meal, we go to capannino di Tolkeyen Patagonia, the agency we have chosen to navigate the Beagle Channel and we collect our tickets.

Before embarking, however, we must make a long queue at the harbor master's office and pay the port tax. 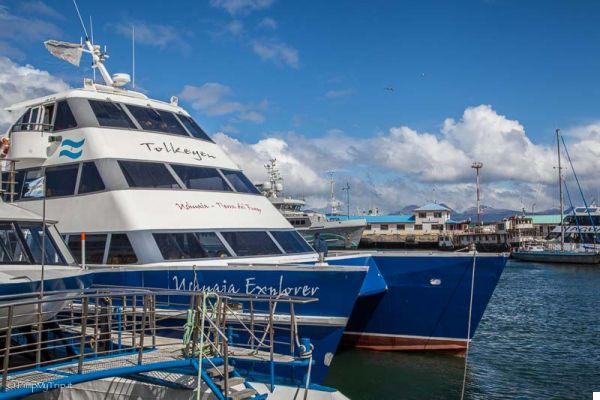 The boat is big and for this I thank heaven: the small boats rock much more and I would not have been happy at all if instead of enjoying the excursion I had to stay all day with my head outboard to bring back to the world what I had made disappear from the table not even a couple of hours before.

We unfold the sails (so to speak since the boat is motorized) and begin to plow the green waters of the canal leaving behind us the city of Ushuaia, crowned by the snow-capped peaks of the Olivia mountains e Five brothers. The view is wonderful: on one side we have the high snow-capped and jagged peaks of theBig Island of Tierra del Fuego in Argentina, on the other the gentler coast with the meadows ofNavarino island in Chile. 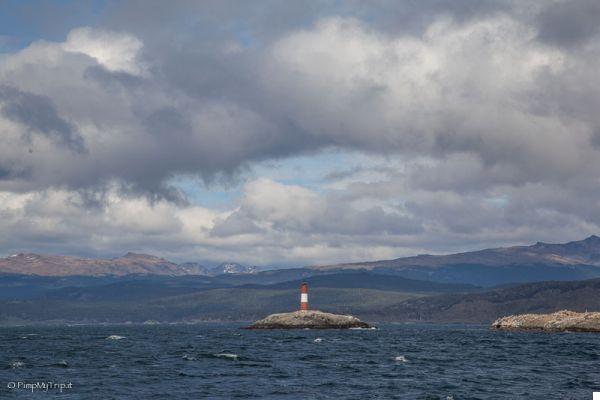 Il Beagle channel it is 240 km long and separates the Isola Grande, where Ushuaia is located, from other smaller islands and is one of the three "navigable roads" that connect the Pacific and Atlantic.

These islands were for many years the cause of a dispute between Argentina and Chile (one of the many I would say, Chile and Argentina still argue today over the ownership of some border areas, such as Antarctica and Los Glaciares National Park), but today the boundaries are well defined here.

Il channels it takes its name from the brig HMS Beagle which in his first expedition here between 1826 and 1830 (Darwin participated in the second a few years later, in 1833, together with Captain Robert Fitzroy) carried out hydrographic research under the command of Captain Phillip Parker King.

The truly fascinating thing about navigating these mythological waters is that it is not difficult to imagine that even today we have the same identical views that Charles Darwin and Magellan had many years before him, when arriving on these coasts he renamed them Land of Fumes, because of the fires that the indigenous Yamana lit on the beaches.

Our first destination is the island of birds, in Bridges Islands of the archipelago of Alicia: colonies of Magellanic cormorants and Imperial cormorants live here. There are so many that it is impossible to count them. 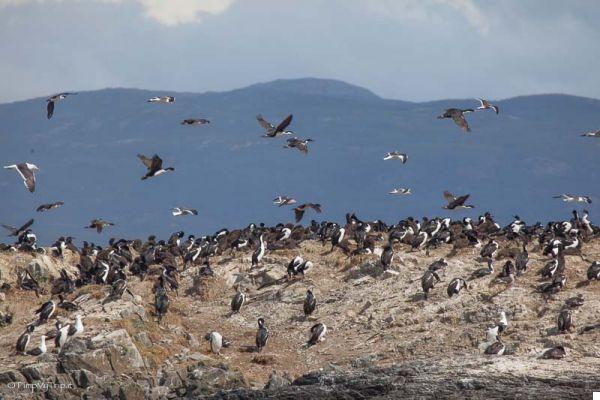 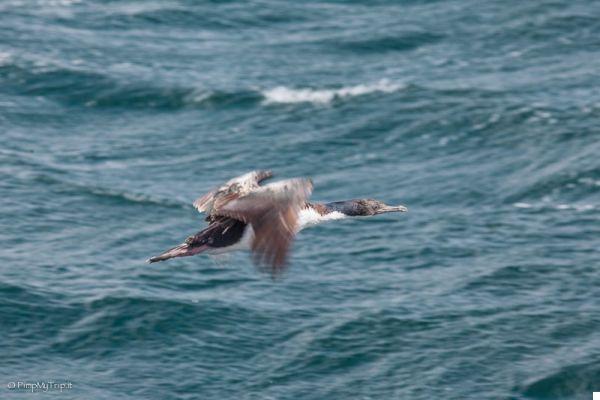 The boat approaches to allow us to take some photos, while the speaker in the microphone tells us the story of the Beagle Channel, its flora and fauna.


After the stop we start again: next destination theLos Lobos Island where the Sea Lions live. South American sea lions are very different from those that I saw in San Francisco al Fishermans’ Wharf o on my trip to the Galapagos. 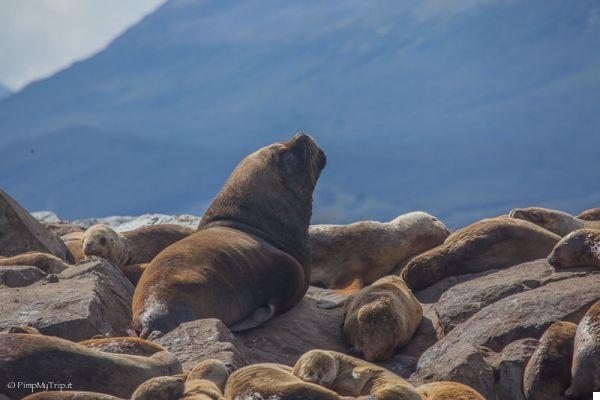 the South American sea lion (Otaria flavescens) has a very large head and the male is characterized by a mane: the males, which weigh twice as much as the females and it is impossible not to recognize them, can weigh up to 300 kg and reach a length of over two meters and a half!

We arrive after about a couple of hours at the faro The Pathfinders, in the archipelago of the same name where in 1930 the vessel Mount Cervantes sank. This lighthouse, painted in red and white bands with a black lantern on top, is called by the Argentines "Faro del fin del mundo". 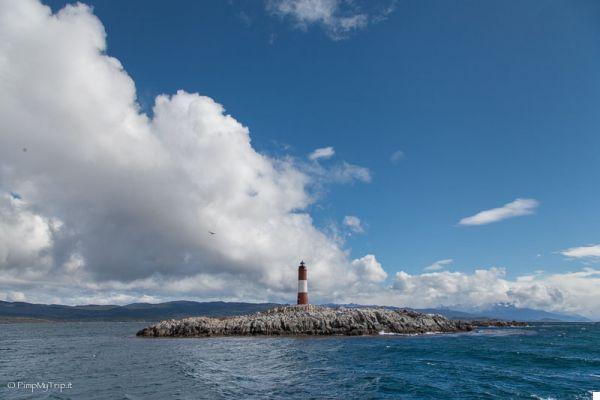 In reality the name is misleading as Les Eclaireurs is often confused with the San Juan de Salvamento lighthouse which is located on the east coast of the distant Isla de los Estados and which was made famous by Julius Verne with the novel “the lighthouse at the end of the world”.

Some canal cruises at this point stop here and come back. We have chosen instead to take the excursion that continues southwards up tohammer island with its pinguinera. 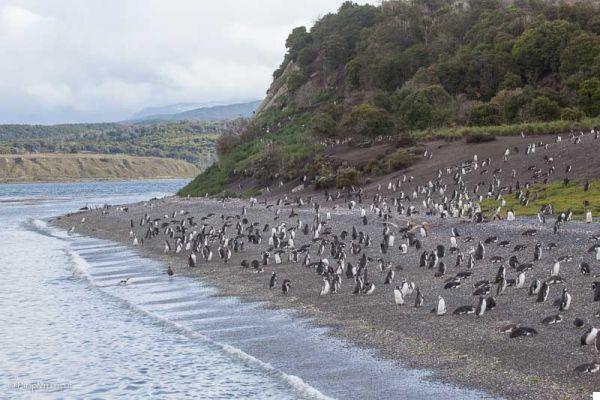 I swear I have never in my life seen such an assortment of animals and in this case of penguins. they are mostly Magellanic penguins (Spheniscus magellanicus), easily recognizable thanks to the black feathers on the head and back and the white belly crossed by two black stripes.


Among the Magellan penguins we also see others of the species Gentoo easily recognizable by their yellow beak and feet. 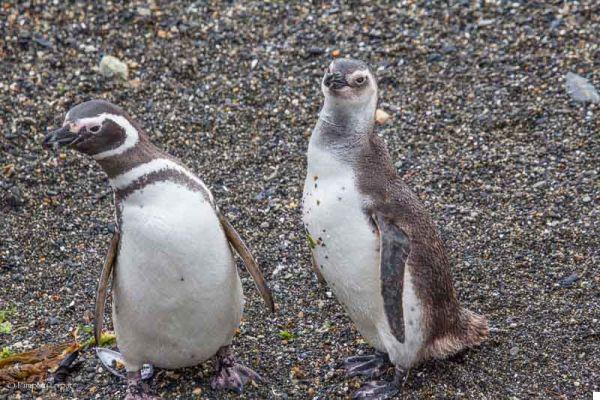 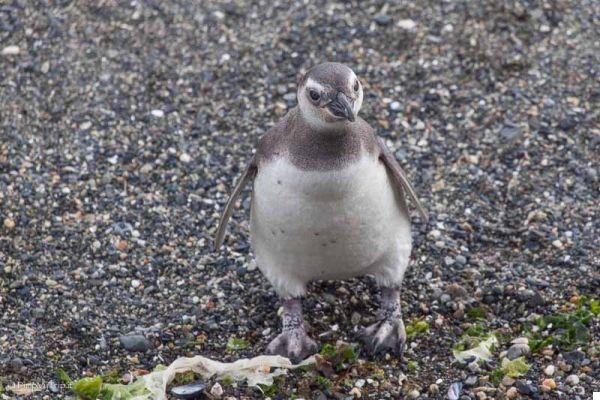 You can't get off the boat, but we get so close to the beach that we feel like we can touch these funny and tender creatures. For their part, the penguins do not seem absolutely disturbed by our presence and by the continuous click clicks of the cameras.

They continue to do their thing as if nothing had happened: they fight, play, bathe, walk and look at us almost more intrigued than us than vice versa. 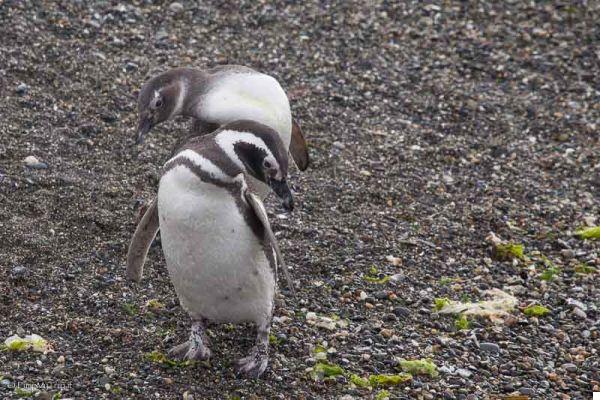 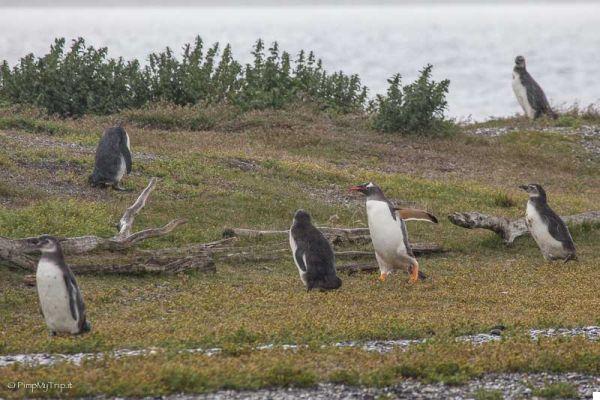 Il Magellanic penguin is a species of penguin that lives only on the southern coasts of South America (Chile and Argentina), on the Falkland Islands (what Argentines call the Malvinas Islands) and on Cape Horn and which, due to pollution, is on the list of endangered species.
Between the end of March and the beginning of April, the colonies leave the mainland and return to the ocean, moving north where the climate is milder. 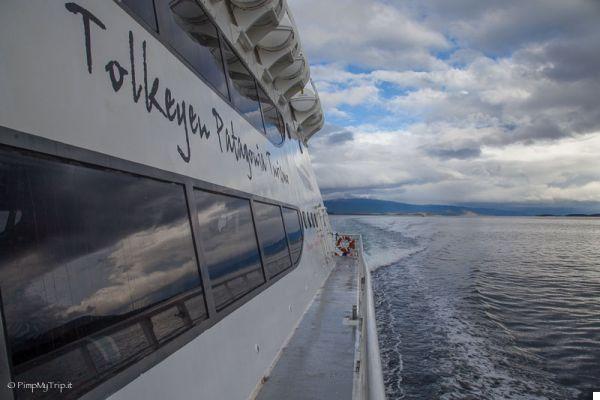 There are several agencies that organize the Beagle Channel cruise and all of them depart from the Ushuaia tourist pier.

Tolkeyen Patagonia organizes several different types of cruises, below you will find the list updated in January 2017. Check on the agency's website, prices and times may have changed. 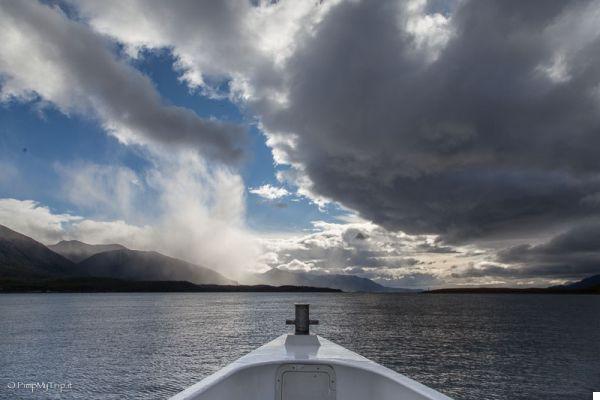 Generally it is forbidden to get off the catamaran at the pinguinera but there is an agency that has permission to do so: I don't remember the name, inquire when you are there.

I personally have no interest in getting too close to penguins (I think they are quite tired of having people walking through them invading their home) and I prefer an experience that guarantees me to see them while maintaining a distance that protects them and without breaking them too much. the boxes.

There is also the option to go with the agency Three Marias which has the exclusive right to go down to Isla H thanks to the Captain who wrote a very famous book on submarine Patagonia.

Disclaimer: the tour on the Beagle channel was done in collaboration with Tolkeyen Patagonia andTerra del Fuego tourist board. Despite this, as usual, my views are real, personal and absolutely sincere.

Navigate the Rio Dulce until you reach Livingston ❯