What to see in the Snaefellsnes peninsula? And how much can we discover about this part of Iceland in a day or two?

Icelanders claim that the Snaefellsnes peninsula represent the whole island in miniature and it could not be otherwise given that all the beauties of Iceland, the immense glaciers, the lava fields, the volcanoes, the quiet fishing villages, the white and black beaches are concentrated in a few hours of guide.

A few hours by road from the capital Reykjavik, the territory changes transforming itself into something simply extraordinary, so much so that it is named among the Best in Travel 2016 da Lonely Planet.

My advice is to dedicate at least a couple of days to the Snaefellsnes Peninsula, stopping kilometer after kilometer to observe the landscape and the volcanic panoramas, the gigantic craters and the unusually shaped mountains over which the Snaefellsnes ice cap reigns.

When I visited, I took my time to do a complete tour and the days I spent there were without a doubt the best of my trip to Iceland.

Personally I had rented a camper but if you decide not to rent the car and want to visit the Snaefellsnes peninsula you can take part in one of these famous and unique tours of Iceland.

In this article you will find my list of 10 things to do and see absolutely in the Snaefellsnes peninsula! 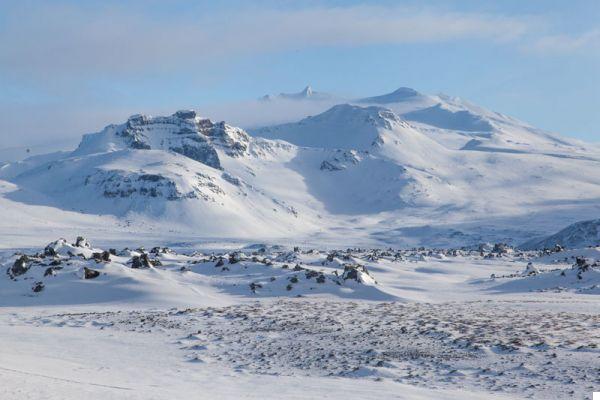 The smallest and newest of Iceland's 4 national parks is centered around the figure of the Snaeffelsjokull volcano believed by geologists now inactive, but still considered alive by the Icelandic population.

Snaeffelsjokull is the best known mountain (together with Kirkjufell) outside the country thanks to Jules Verne who was inspired by this volcano (although he never saw it) for his famous book "Journey to the Center of the Earth".

Although the summit of Snaeffelsjokull is defined as a huge snow cap, in reality its summit consists of a deep crater surrounded by three separate peaks: the glacier is shaped like a lens with an ice globe filling the cavity. of the volcano.

The National Park extends at its foot with a rugged landscape of steep hills and fields of jagged rock: it is the ideal place to take a walk and soothe your senses, immersed in absolute silence.

For the more adventurous, however, there is the possibility of booking a tour to walk directly over the glacier. Don't go alone, but rely on an experienced guide for clear safety reasons. 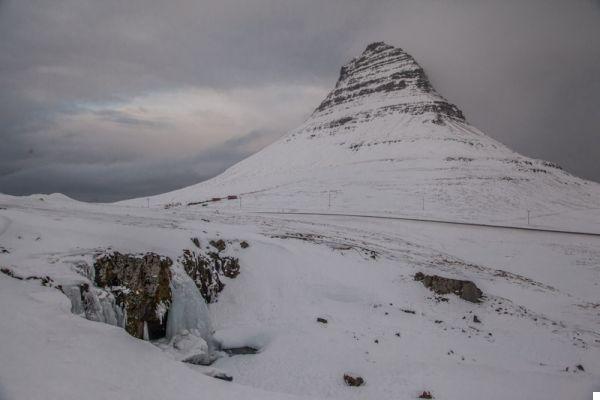 Probably the mountain best known by photographers around the world who dream of being able to capture the image of the mountain crowned by the Northern Lights, the Monte Kirkjufell is the first thing that catches the eye of the tourist as soon as he arrives at Grundarfjordur, a bright blue cove surrounded by a phenomenal expanse of mountains.

To see it it would seem impossible to be able to climb it, but in reality it is not so: the climb to the top is possible for everyone, but if you are afraid of encountering difficulties you can rely on an expert guide. For organization you can contact the tourist information center. 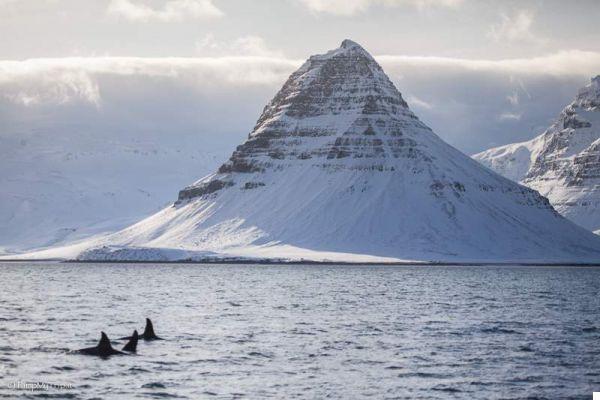 Killer whales in the background of the Kirgkjufell

Iceland is the perfect destination if you want to do it whalewatching. The best time to spot whales and sperm whales is definitely summer, but if you go in winter and you are lucky enough, you will experience the wonderful experience of meeting the queen of the seas, the great killer whale!

Read my experience at search for sea whale in Iceland!

If you don't have my luck (but I'm sure you won't be disappointed in any case) the excursion will still give you breathtaking views of the Kirkjufell and the Snaeffelsjokull ice cap.

4 - Relax in a natural thermal pool in Landbrotalaug

I'm generally not one who likes to relax very much when traveling: I spin at the speed of a top without ever stopping. But if you come to the Snaefellsnes peninsula it would be a real crime not to dedicate a few hours to yourself by being caressed by the warm waters of the natural hot spring of Landbrotalaug.

The hot spring is quite small, but the water temperature is perfect. The only problem is that you may already find someone who is wallowing in it and then you will find yourself having to give up since it cannot accommodate more than 2 or 3 people at a time. If you are lucky, you will find it all just for you!


How to get there: Landbrotalaug is not very easy to reach, but it is so beautiful so lost in the middle of nowhere that every effort will have been worth the pains to get there. In any case, remember that Google is your friend, just enter “Landbrotalaug Hot Springs” in google maps on your smartphone and the directions to reach it will appear as if by magic.

5 - Go underground in the Vatnschellir quarry

In 1864 Giulio Verne wrote his classic short story "Journey to the center of the earth" in which professor Otto Lidenbrock, his nephew Alex and their guide descended into the crater of the Snæfellsjökull volcano, meeting a thousand adventures and adventures of all kinds.

Despite the fact that Verne never came here and that the story is in many ways full of inaccuracies and seasoned with a good dose of imagination (after all, at the time there were not the acquaintances we have today) it is fun to imagine meeting all of them. creatures
fantastic that Verne talks about as you go down inside the quarry of Vatnshellir, a lava tunnel just below the Snæfellsjökull glacier.

The formation of the tunnel dates back to about 8000 years ago when the lava flowing underground dug the rock flowing towards the valley.
Lava tunnels are formed because the external part of the lava solidifies while the one inside, which remains fluid due to high temperatures, continues to flow until the tube is empty: thus natural tunnels remain.
The visit lasts about 45 minutes in which you visit the three accessible rooms, observing stalactites, stalagmites and lava formations.

And who knows if you don't happen to come across one of the trolls that the legend says live inside the tunnel and wait in the shadows for the tourists to leave to come out and play!

6 - Admire the basalt peaks in Londrangar 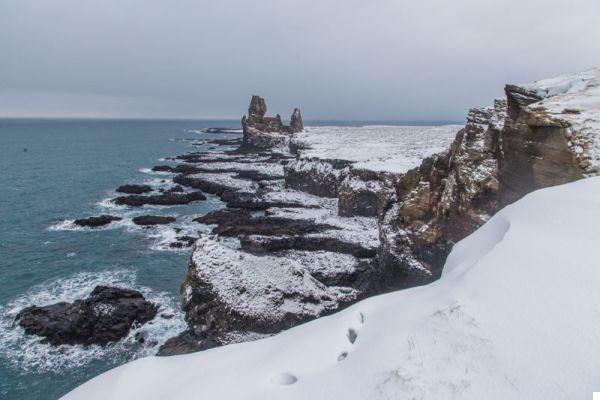 Near the basalt peaks is also the Malarrifsviti lighthouse which was built in 1917.

The Icelanders in the area around here have never built anything, because according to legends, this area is inhabited by elves and according to legend, the poet Kolbeinn Joklaskald at the foot of the two peaks had a direct encounter with the devil.

Observing the coast here is moving for its drama and beauty. In summer, the famous puffins nest on the cliffs overlooking the sea.

7 - Stroll to the small harbor of Stykkisholmur 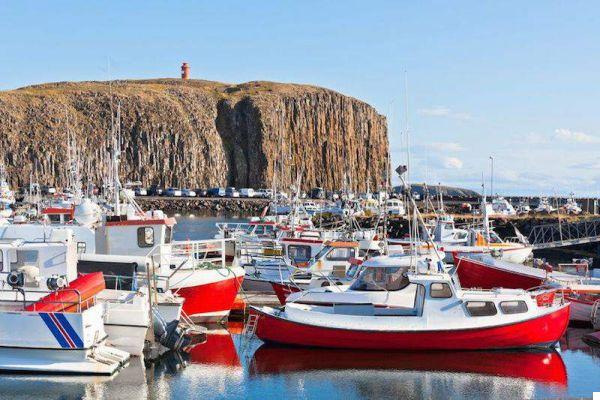 The main gateway to Breidafjordur (western fjords) and its approximately 3000 islands is this marina which is exactly the place you expect to see when you think of Scandinavia: a small harbor surrounded by shallow ocean-lapped rocks and small brightly colored houses, each one different from the other.

Stykkisholmur literally it means "piece of island" and to observe it well actually what it is if you take into account its geology and its geographical position.

A few kilometers south of Stykkishólmur there is  Helgafell, the famous sacred mountain of Iceland where the remains of one of the heroines lie Icelandic sagas, Guðrun Osvifsdóttir. The area is great for trekking and spending a few hours relaxed, away from silence and crowds.

Stykkishólmur is, given its privileged location, an excellent base for exploring the Snaefellsnes peninsula. Lately it has become very touristy so it is not difficult to meet the big buses of tour operators and various travel agencies.

If you need more information here you can find the official website of the country.

8 - Eat fish and discover the history of fishing in Olafsvik

The "Bay of Olaf" has always been linked to the sea: probably if you have eaten fish in some part of Iceland it is Olafsvik which comes from. Just take a tour of the port in the morning to realize how the economy and life of this town revolves around fishing.

Everything is explained to the interesting Maritime Museum, a small museum set up inside an old fishing warehouse.

Olafsvik being the closest city to the National Park is often chosen by travelers as the starting point for excursions. Olafsvik is also one of the best destinations for whale watching: the area is famous for sightings of sperm whales and blue whales.

Where to eat the best fish: go for lunch or dinner atHotel Olafsvik which has the best restaurant in town.

9 - Imagine getting married in a black church 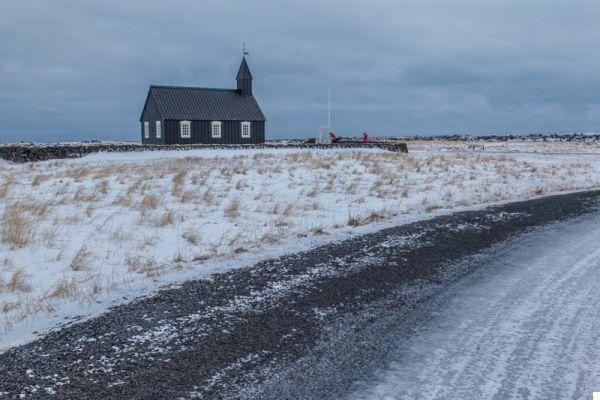 Going along the entire Road 574, even from a distance, one cannot fail to notice the small black church and the white hotel of Budir. Turn onto the Budavegur road and stop and visit what for me is one of the most romantic places in all of Iceland.

This place is all that remains of a vibrant fishing village that was an important trading center in the 19th century but of which today, sadly, only a few abandoned fishing stations remain.

The first church was built in 1703, but was later destroyed and rebuilt. Inside there are some ancient artifacts like a clock from 1672 and an altarpiece from 1750, but unfortunately the church was closed when I went. Many churches are closed in Iceland following theft and vandalism.

Make a stakeout and try to catch the keeper who has the keys by asking him to open the door for you.

Just a few tens of meters from the black church (and the small cemetery) there is a large white hotel famous for wedding banquets. Imagine getting married here or on the pink beach with the black lava fields behind you and the Snaefellsjökull glacier in the background… personally I think it is one of the most romantic places in Iceland for a wedding!

10 - Take a souvenir photo in Arnarstapi 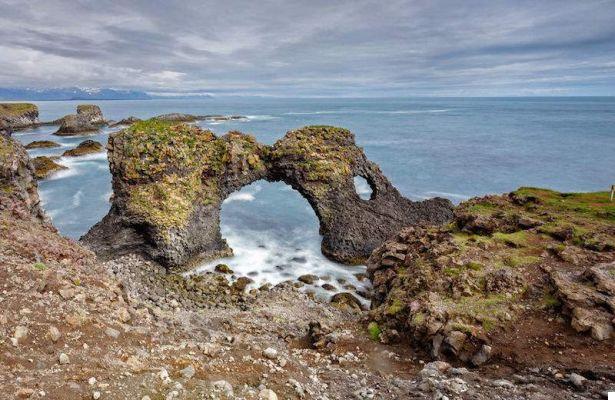 Arnarstapi it is certainly a magnificent work of art of nature, with its rock formations and extraordinary basalt columns.

Arnarstapi was also once a vibrant community and natural harbor and when you walk here in the right season you can spot various bird species.

Arnarstapi is certainly a magical place and the coastal walk offers many opportunities to take some nice souvenir photos. One of the most famous is the one on the rock bridge: don't worry it's less dangerous than it might seem.

This is just a list of the things you can see in the Snaefellsnes peninsula in a day or two. The truth is that the area is so vast and full of little hidden gems that you could even spend a week wandering around without ever seeing the same thing twice.

Small guide to Kosice, Slovakia off the beaten path ❯

Where to Stay in Reykjavik: Guide to the Best Areas and Hotels

Aurora Borealis in Iceland: How, Where and When

Blue Lagoon in Iceland: is it really worth it?

10 Beautiful Things to Do in Reykjavík and Travel Tips

add a comment of Snaefellsnes Peninsula: 10 Things to Do and See