The Old Quarter of Prague and the Headless Templar

Il Old Quarter of Prague (Stare Mesto) is where the heart of the Magic city beats: here the winding alleys lead to the old square which with its astronomical clock, the facade of the Tyn Cathedral (which seems to have come out of a fairy tale), the church of San Nicola and the colored facades of the houses it enchants all those who see it for the first time and also those like me who have come back again and again. 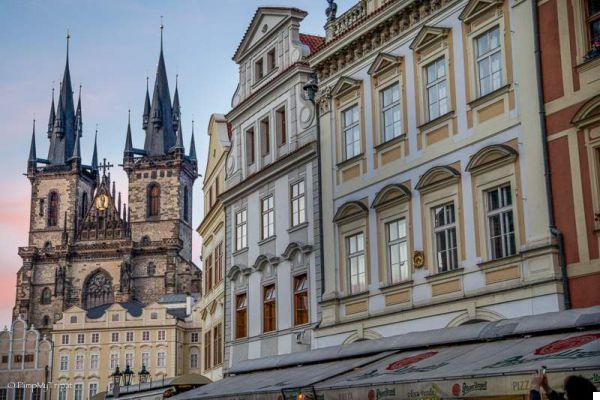 Prague was originally divided into 5 main districts: the part around the Castle, Malá Strana (my favorite district!), The Old Quarter (stare Mesto), Nové Město (the “new” quarter) and the Jewish quarter.

First time going to Prague? Read my itinerary on what to see in Prague in three days!

When you think of ancient Prague, however, you have to make a mental effort, in fact the city was very different from what it is today with the stalls of painters on the street and the trendy boutiques: Prague was gothic and medieval and the atmosphere was permeated with ancient legends, ghosts, and… headless horsemen!

Prague was born on both sides of the Vltava (Vltava its original name): on one side the Castle and Mala Strana on the other, crossing the famous Charles Bridge you arrive directly to the Old Quarter, built between the bend that the river forms at this point and bordered by three Revoluční streets. east, Na Prikope to the southeast, and Národní třída to the south. 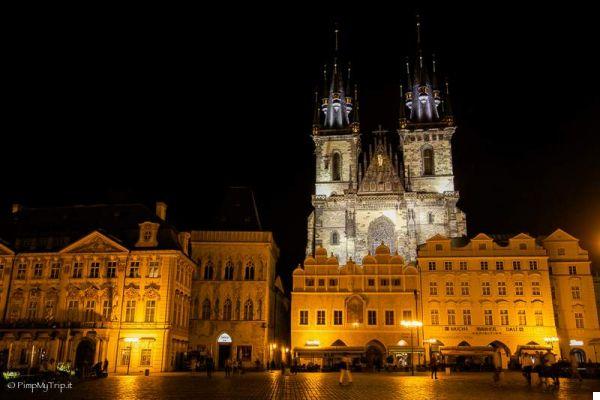 The square of the old quarter

A short way east from the Charles Bridge is the heart of the old quarter: Staromestske Namesti (Old Town Square). The medieval square, where the main market of the city was once held, is, with its baroque houses and colorful facades, simply one of the most beautiful squares in Europe.

Here we find among the most important monuments:

Cathedral of Saint Mary of Tyn

The Cathedral of Saint Mary of Tyn is one of the most impressive (and famous) Gothic buildings in Prague, built between the 1679th century and the beginning of the XNUMXth century and whose interior was subsequently renovated in Baroque style following the fire of XNUMX. If the two bell towers and the facade are easily recognizable from the square, its entrance is not so. In fact, houses have been built in front. The entrance is located under the arcades inside a door.

Across the square from the Cathedral is the Town Hall with the famous astronomical clock. Impossible not to notice it since tourists gather here every hour to observe the movement of the eleven apostles plus the special guest, St. Paul and the other movable statues of which one of the most famous, the skeleton, symbolizes nothing less than death. 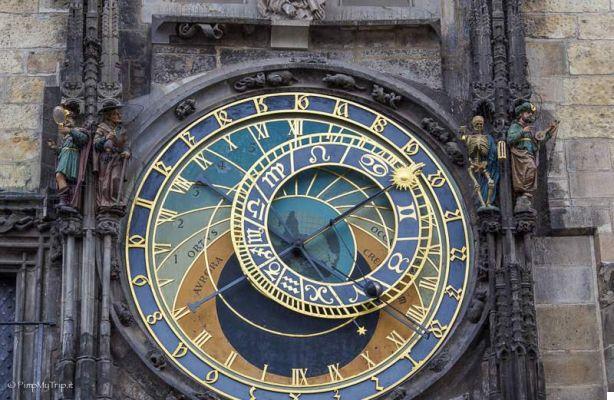 Astronomical clock with the guest star, the skeleton?

Did you know that the 12 apostles we see today are not the originals that were destroyed during World War II?

A terrible legend is also linked to the clock: it seems that there is a curse above it that infects anyone who observes it. The one who invented it, in fact, the watchmaker Mikuláš of Kadaň he was blinded so that he could never reproduce another like it again. He went mad with grief and cast the curse before committing suicide by throwing himself from the top of his work.


The astronomical clock is simply a marvel of technology, considering that it was built more than 600 years ago. In fact, the clock not only indicates the passage of time, but also the alternation of the seasons, the zodiac signs, planets and constellations, the rising and setting of the sun.

The town hall on which the astronomical clock makes a fine show was built in 1338 and from the tower you have a tremendously beautiful view of the square. 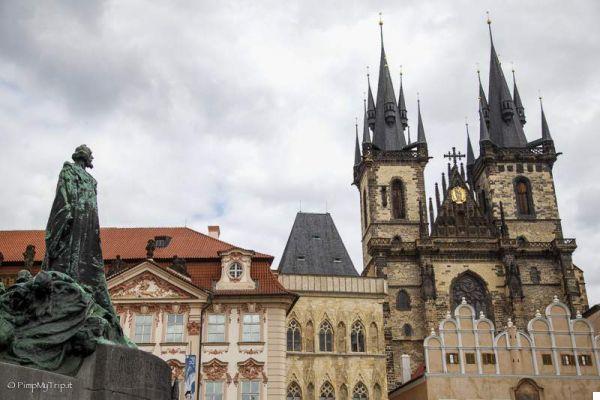 The monument that dominates the square of the old quarter represents Jan Hus, Bohemian theologian and religious reformer and was completed in 1915 on the occasion of the 500th anniversary of his death.

It represents two groups of people, a young mother who symbolizes national rebirth and the figure of Hus which emphasizes the moral authority of a man who gave his life for what he believed in (he was burned alive).

The beautiful baroque church of San Nicola it was completed in 1735 by replacing a parish church which is mentioned in some documents dating back to 1200.

The interior of the church was inspired by the chapel of ST. Louis-des-Invalides in Paris: the beautiful and delicate stuccos are the work of Bernardo Spinetti and the frescoes of Pietro Adamo il Vecchio. 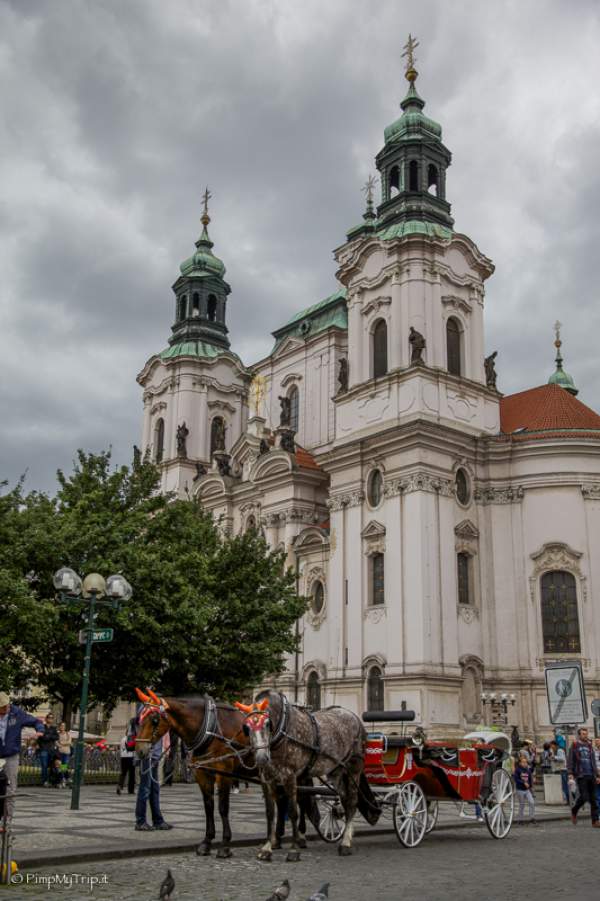 Other places of interest in the Old Quarter of Prague

This church, in front of which the largest open-air market in Prague has been held since the Middle Ages, was when one of the 4 main churches in the city was built. The current Baroque façade dates back to the 1700s.

This church, built in 1100 and dedicated to San Martino bears this name because when the ancient city walls were built, a church wall was incorporated into the walls.

In my opinion, one of the things to do absolutely when visiting Prague is to attend one of the classical music concerts which, thanks to the perfect acoustics, are hosted here practically every Saturday night.

A monumental church that too often goes unnoticed and that "hides" behind a Gothic portal.

It is located a stone's throw from the square in the Old Quarter, but few people visit it despite being beautiful and important, perhaps because in the guides it is often given too little visibility, but don't miss it!

The frescoes by VV Reiner, one of the most important painters of the Bohemian Baroque, are beautiful.

Part of National Museum, the collection includes artifacts from African, American and Asian cultures. in addition there is an exhibition dedicated to the founder of the museum, Czech explorer, patron and philanthropist Vojta Náprstek.

The museum is located in a complex of buildings belonging to the former U Halánků brewery and distillery.

In this former Dominican convent of San Clemente is hosted there National library. 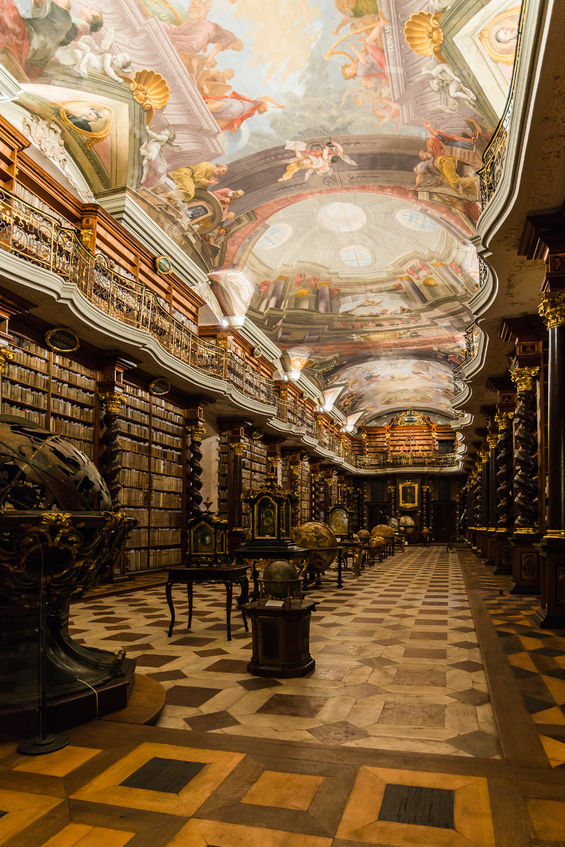 “Prague, Czech Republic - circa November 2015 - inside the
Klementinum in Prague ”credit Shanti Hesse via 123rf.com

If you pass in front of Kinsky Palace one cannot fail to stop and observe the statues and stuccos that decorate the façade. Inside, important art exhibitions are organized.

The Legend of the Headless Templar

(Sorry no photos of the headless Templar, he didn't let himself be photographed)

Well if you have managed to put up with the pippone article (not only for you who have read it but also for me who wrote it) then we can spend 5 minutes of lightness with the legend of the Templar without the Head that seems to go through every evening at a gallop and drawing his sword through the narrow streets of the old quarter of Prague.

Because sometimes a little funny story is needed.

This legend is taken from a story that Frantisek Langer published in his book Legends of Prague (unfortunately at the moment sold out on Amazon, but as soon as and if it becomes available again I will put the link here so you can read it too).

The story takes place between the Old Town Square (Starometske namestie) and the Powder Tower: originally the Representative House was supposed to be right behind the Tyn Cathedral in Ungelt, a large courtyard where the city market was held weekly.

She wasn't finally placed here because of this headless Templar who was cool to tell the truth. In fact, the Grand Templar Master of Bohemia, like many others belonging to the order of the Knights of the Templars, had his head cut off because of the King of France and the Pope who was not so much a good Christ apparently.

In short, apart from the premises, the legend tells that at a certain point in the streets of the old quarter of Prague, around 23 pm people began to spot the ghost of a knight without a head who was galloping through the streets of the city holding his sword. unsheathed in one hand and his head in the other.

After years of honorable work in the service of the city, people began to see him staggering a little.

This is because the Templar liked beer and every night he stopped in an old brewery to make gotti. It is true that at first he did not get drunk because, holding the severed head in his hand, the beer through the carotid ended up on the floor, but then the young woman who cleaned the room, tired of cleaning the liquid mixed with other unidentified body fluids, advised them to put their heads back.

With great satisfaction the ghost finally managed to get the beloved amber liquid into his stomach.

This improvement, however, had side effects: the Templar began to get drunk.

But how does progress happen if you can call it that, it advances and someone thought of demolishing the houses in the Old Quarter and replacing them with new buildings, and building what is now called Obecni Dum (Municipal House) behind Tyn's courtyard.

The Knight seeing his city destroyed was furious and began to wander through the streets of the neighborhood drawing his sword galloping with his steed.

Unfortunately, however, he went around at night and the work was carried out during the day so his wandering like a madman did not stop the work.

At some point, feeling a little discouraged and inadequate, he decided that perhaps his head was no longer so good and that he should find another one.

One evening looking into a room, in the midst of papers and paperwork, he saw a head that he thought might be suitable for his needs, he took it and left his in exchange.

Except that the head he had decided to take was that, guess what, of the mayor of the city who just the following day would have had to participate in a meeting of the city council to decide further demolitions to those that were already taking place throughout the old city in those days. .

So it was that the mayor went to the council the next morning, until at a certain point he was in the mood for a beer. He greeted everyone and went to his favorite brewery.

When he came out, half staggering from the effect of the alcohol he had swallowed at will, he looked around and saw the ancient cracked facades, he felt their sweetness and warmth: he saw with his eyes what the Templar had seen until now and he decided with you could not destroy a heritage like this.

At that point he felt like a warm breath on his neck, he turned and saw the rider on his steed with his head: in horror and terror he fainted.

Nothing is known about how he got home or how he got his head back. What we do know is that the knight won his battle and that Tyn's yard has remained in place.

It seems that the rider still gallops during the nights with his white horse in the alleys of the old quarter of Prague. Prick your ears, maybe you will be able to hear the trampling of hooves on the pavement of the streets.

What to see in Cesky Krumlov, Romanticism in the Czech Republic

What to see in Prague in 3 days: unmissable attractions

Where to sleep in Prague: the best neighborhoods

How to Visit Prague Castle: Timetables, Tickets and Tours