Visit of the Santiago Bernabeu in Madrid: tour tickets

One of the main attractions in Madrid is a visit to the Santiago Bernabeu. The stadium of the Spanish capital is the famous football stadium where Real Madrid play.

A visit of the Santiago Bernabéu is, without a doubt, a highly recommended experience, not only for fans of this sport, but for anyone, as it is one of the most visited attractions in Madrid and one of the great temples of football.

The Santiago Bernabéu stadium is located on Paseo de la Castellana 142, it was inaugurated on 14 December 1947 with a capacity of 75.145 spectators. Since its construction, several renovations have been carried out and the stadium has now reached a capacity of 81.044 seats.

During the Bernabéu Tour you visit the most charismatic places of the club, and you have the opportunity, not only to get to know its sports facilities in detail, but also to enter areas that the public usually never sees on the screen.

Timetable for visiting the Santiago Bernabéu

The stadium closes only on December 25th and January 1st. The rest of the year remains open, with the following program:

Tickets are sold at ticket office 10 near the Puerta 7 stadium in the area overlooking the Paseo de la Castellana. Access to the tour is through the stadium's tower B. To avoid queues on peak days, you can buy tickets online.

These are all the places you will pass by on the Bernabéu tour, from the beginning to the end of the tour:

Overview of the Santiago Bernabéu stadium

The first stage of the Bernabéu Tour begins by climbing to the top of one of the towers from where you can have a panoramic view of the stadium from above. Here we can take the first photos, to continue until the next stage of the tour, the trophy room.

In the Trophy Room we can remember all the triumphs that this team has collected throughout history. You can contemplate, among other trophies, the European Cups, the UEFA cups, i Golden Balls by Zidane, Ronaldo, Kakà, Figo, Cristiano Ronaldo or le Golden shoes by Hugo Sanchez, Raul and Cristiano Ronaldo ...

The tour also includes a visit to an interactive room, known as the 'Best Club in History', where we can learn more about the history of the club. Another room that we can visit is dedicated to one of the greatest Real Madrid players of all time, Alfredo di Stefano.

Tour of the playing field

In the next stage of the visit to the Bernabéu, we descend from the first amphitheater towards the playing field to reach the Presidencial stage.

This stage is the most exclusive area of ​​the stadium, where the president, directors, authorities and special guests usually sit. During the visit you can sit in the same place where the Real Madrid president normally sits. 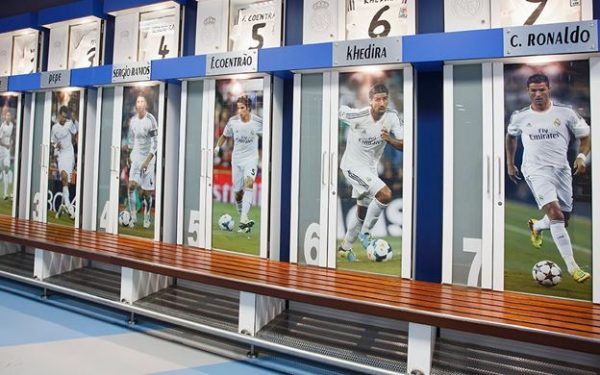 Visit of the Santiago Bernabeu in Madrid - the changing rooms

The next stop on the tour is a visit to the stadium's changing rooms, the place where players change and prepare before playing and where some of the greatest players in football history have passed.


In the dressing room of the first team you can see the position with the name and photo where each player changes.

After visiting the Real Madrid dressing room, we go on the same journey that the players take to reach the field. You go up the same steps and find yourself in the benches where the players of Real Madrid and the visiting team sit.

You can approach the playing field but without stepping on the lawn, as it is protected by a fence so that it cannot deteriorate and is in perfect condition when playing.

While visiting the Santiago Bernabeu you can do a virtual tour on a bus that is the replica of the one used by Real Madrid players. The simulator has 12 65-inch high-definition 4K screens and a panoramic video wall, recreating the experience of Real Madrid players before reaching the stadium.

It is the area where team coaches and some players usually talk to reporters about the game. You can also sit in the same seat as Real Madrid players and take pictures as if we were giving a press conference.

At the end of the tour you will reach a shop where you can buy some souvenirs of the team. All kinds of items are found, from shirts or soccer balls to children's clothes or books.

The tour lasts, more or less, an hour and a half, although you can stay in the stadium as long as you want. A very important thing to keep in mind is that although part of the tour can be done in a wheelchair, not all places are accessible. 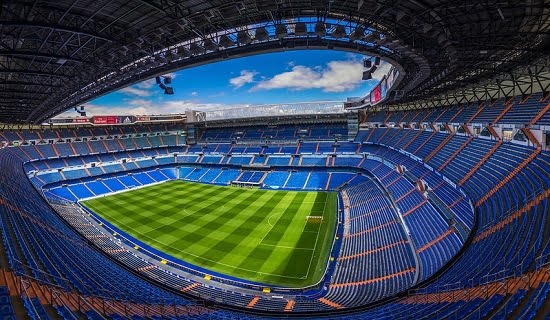 Santiago Bernabéu Stadium in Madrid -
Visit Biella: what to see and where to sleep ❯

add a comment of Visit of the Santiago Bernabeu in Madrid: tour tickets