Adventure travels in Chiapas: from Palenque to the Agua Azul waterfalls

It took us about a minute, just out of the ADO bus station, to get hooked by one of the numerous agencies waiting for tourists arriving by night buses.

From the rest to Palenque it is impossible to visit everything there is to see in a single day by public transport and the agencies offer a very convenient service including transport from the station to your campsite at a fair price. 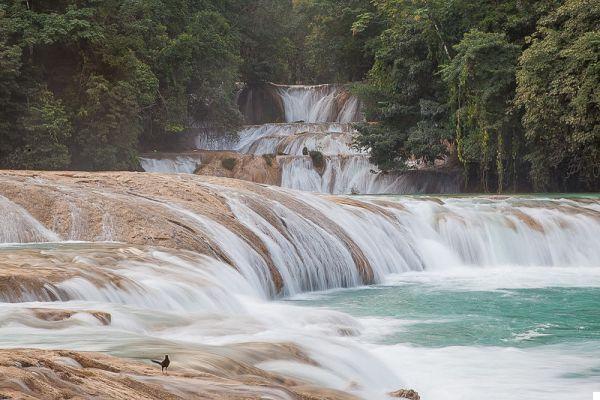 I love nature, forests and large waterways and one of the things I knew before leaving for ours trip to Mexico, was that I absolutely didn't want to miss the Mayan ruins or the waterfalls of Blue water.

Two full days, the time we spent here, is enough to see all the most interesting things, to fall in love with it and to understand that Palenque is a destination not to be missed when planning a trip to Mexico.

Of all the Mayan ruins I've seen in Mexico, Palenque is the one I undoubtedly liked the most, especially as it is immersed in a lush jungle that seems to want to embrace the ancient pyramids. 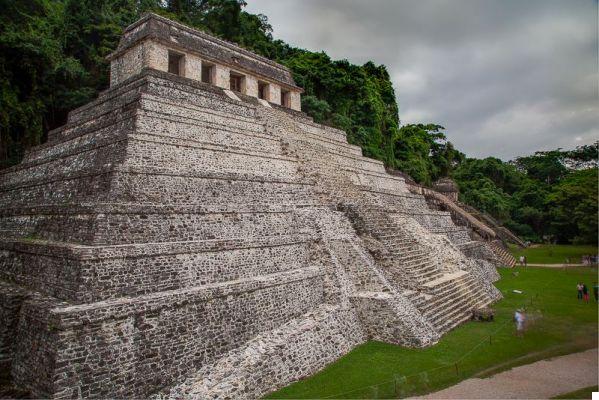 One of the biggest mistakes I made while visiting the archaeological site was that of I got caught up in the delirium of poverty again and not having taken a guide: in fact there are few information signs on the site.

The ruins are so mysterious, so wrapped in the jungle, that surely with someone prepared and who tells the story, they take on an even more special charm.

Lakam Ha was founded about 100 years before Christ and despite this it is very well preserved: the name meant "great waters" for the favorable area thanks to the numerous springs and waterways in the area.

Even though Palenque is smaller than other Mayan sites, it seems that only 10% are in the open, while most of the city is still trapped under the jungle and it is precisely this that gives it that mysterious air that has literally fascinated me. 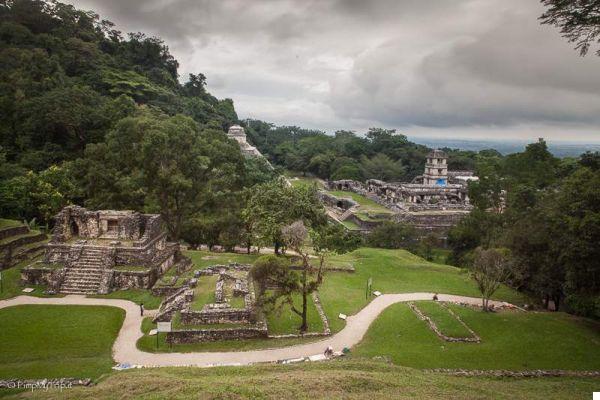 Panorama of the archaeological site of Palenque, mysterious, isn't it?

The first building you come across and which is located in a lush clearing is the Temple of the Inscriptions, the ancient tomb of re Pacal.

Another of the things that make this site fascinating is that Palenque is among the few Mayan ruins along with those of Ek Balam which can still be climbed (in most archaeological sites around Mexico it is forbidden to climb to the top of the pyramids because an elderly tourist a few years ago tumbled down from the pyramid of Kukulkan in Chichen Itza and was left dry).

From the heart of the temple at the top of the pyramid you can enjoy an amazing view of the entire site and you are rewarded for all the effort to get there.

Continuing along the path and climbing up a gentle hill you arrive at the Temple of the Sun, smaller than that of the inscriptions, but more interesting for its architectural decorations: even from here the view sweeps over the entire archaeological site, from the Temple of the Inscriptions to the palazzo, the most complex building in all of Palenque and which is easy to distinguish for its own four-body tower. 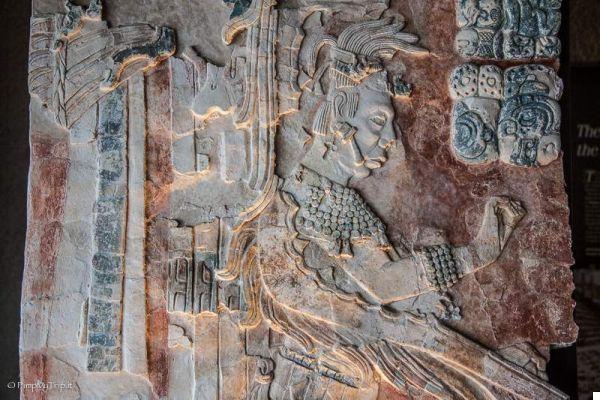 Two hours is more than enough to visit the ruins of Palenque. To get out, my advice is not to take the outward journey but to take therear entrance to the archaeological site: a well maintained trail that goes through the jungle and near some beautiful waterfalls.

Along this path, in addition to avoiding the busy bus park, the harassing vendors and official and unofficial guides, you arrive exactly across the street from the Museum: inside it the history of the Maya civilization is amply told and of the ruins of Palenque, as well as having some archaeological finds on display. 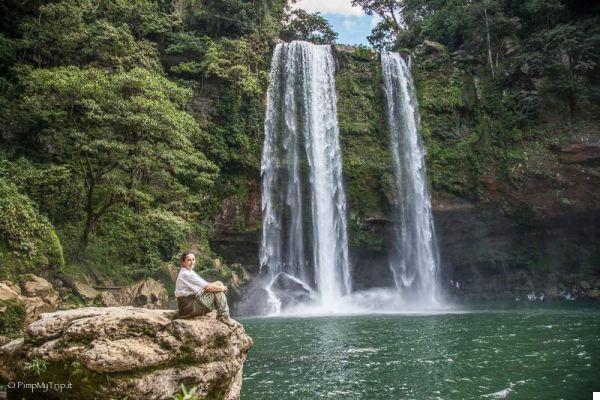 Thirty-five meters of water plunging into a natural pool, surrounded by lush forest, Misol-ha means "waterfall" in the Ch'ol language.

A slippery path under the trees leads from the parking lot (where there is also a restaurant) to the foot of this wonderful waterfall, perfect for taking a bath and cooling off from the heat after visiting the Mayan ruins.

If you want, you can go behind the waterfall on a rather precarious and slippery wooden walkway, but to do so you have to pay an additional 10 pesos. 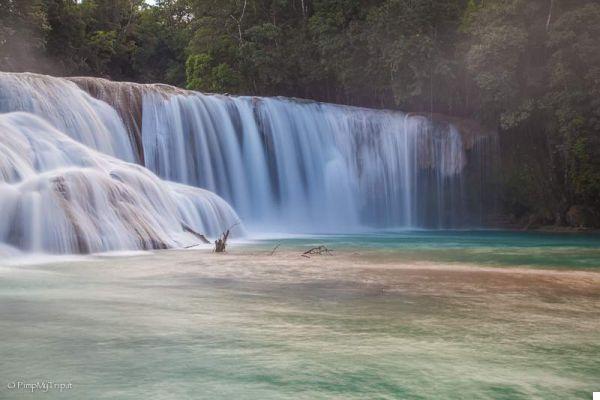 The main waterfall of Agua Azul

Le Agua Azul waterfalls they are well worth their name for the color of its crystalline waters which varies from blue to sea water to green. From the entrance a path follows all the levels of the falls and since the place is very touristy, to escape the crowds you have to climb as high as possible, where under the trees and in an environment full of peace there are some pools where you can even swim. 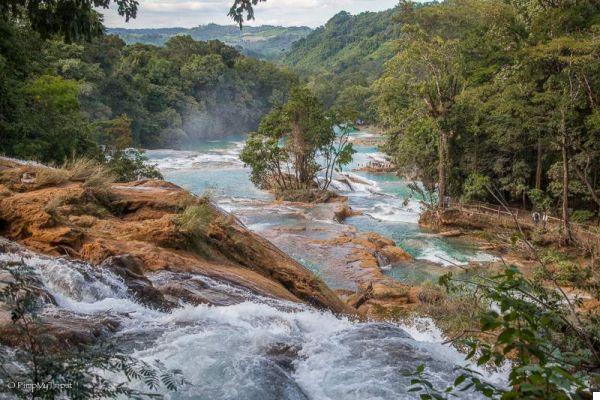 Panorama of the falls from the highest point of the route

Along the way there are stalls selling souvenirs or street food and some are a good opportunity to sit and rest in the shade of the trees after the effort of the climb.

The town (pueblo) of Palenque is quite insignificant and certainly the best thing to enjoy the show that the jungle is capable of offering, is to sleep in one of the many campsites located on the road leading to the archaeological site.

To get to the campsites it is necessary to enter the Nature Reserve of the ruins and pay a toll of a few euros.

There are camping sites of all prices and categories and practically each of them offers various options for sleeping: from the cheapest hammock hanging under the trees to real luxury bungalows with en-suite bathrooms. 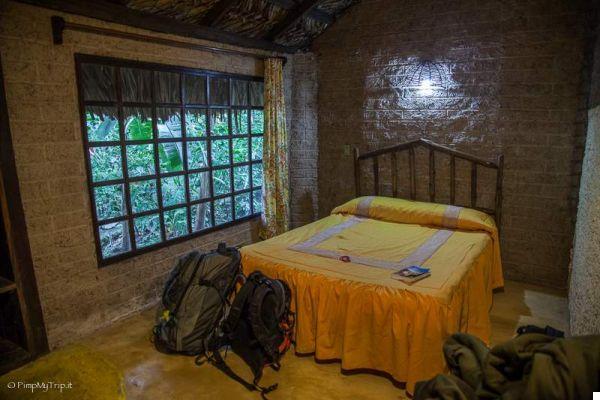 Our bedroom with shared bathroom at the Palenque campsite ... after all, since it was our honeymoon, we allowed ourselves to spend a little more ... but not too much!

Yes, visit Palenque, Blue water and the waterfall of Misol-ha it is possible with the colectivos, local public transport, but since Agua Azul is about 90 km away, doing everything in one day is practically impossible.

I only had two days available and it is for this reason that I chose an organized tour that would take me comfortably from one side to the other, so that I could dedicate the second day to visiting the very interesting Yaxchilan and Bonampak.

Travel by bus: instructions for use and to leave prepared ❯

5 of the most beautiful Mayan archaeological sites in Mexico

Honeymoon in Mexico do it yourself, two weeks itinerary

Cenote Discovery, dive into the Mayan caves without a diving license

add a comment of Adventure travels in Chiapas: from Palenque to the Agua Azul waterfalls