Il Costa Rica welcomed us like this, on a dark night under a pouring rain. The first image in my head is the street lights beyond the drops on the taxi window.

One thing I must tell you, however, although it was the rainy season, it actually rained much less than I would have expected. Before leaving a boy as soon as he got back he wrote to me: “Bring your k-way, it will be your best friend”. Instead I almost didn't need it.

And I also drove in backpack an umbrella that I have never opened. 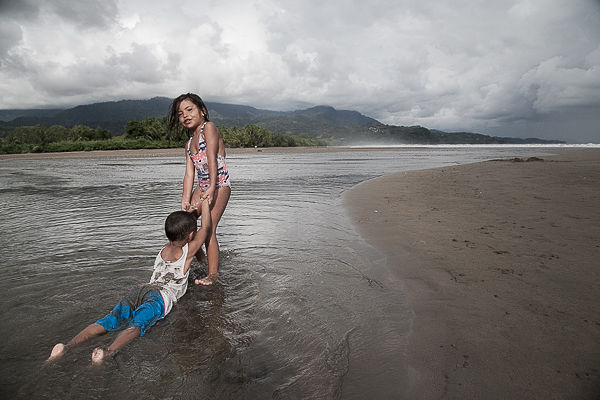 Crazy how in Costa Rica the weather can change quickly during the day. One moment the sun is shining, the next big clouds pour buckets of water from the sky. When it starts to rain what else do you want to do but run for cover somewhere and wait for it to pass?

Plan a trip in Costa Rica it is really simple, the country is very quiet and of a rare beauty difficult to tell.

The arrival at night after 25 hours of travel in the limbo without space and time of air flights and airports, sees us arrive at San Jose so destroyed that he cannot keep his eyes open. We take a taxi and let us take us to the Toucan Rescue Ranch where I booked a room and a visit to the center for the following day (125 USD in total for two). The room will then reveal itself as a small and charming cottage in the middle of a meadow.

Wake up very early (thanks time zone) and visit the Toucan Rescue Ranch.

After the visit to the center, around lunchtime we calmly take a rented car (the legendary "Blue") for the next three days and leave for Sarapiquì. The afternoon goes thrown I don't say where because someone managed to forget the backpack in the restaurant and we had to go back. Eventually I manage to trade the threat of heavy insults for a paid night at Selva Verde Lodge (117USD the double room with bathroom).

Wake up at six in the morning and go birdwatching because it is early in the morning that sightings are easier, a couple of hours in which I saw everything, even the three different species of toucans present in the area, as well as howler monkeys, cebi capuchins and sloths.

After breakfast departure for the chocolate tour, very interesting even if the price is quite high (30USD). After a hearty lunch we wander around in the car, we stop to take pictures, we go wrong ten times and every time it is a discovery. In the evening we arrive at a small hotel / churrascheria on the slopes of the Poàs. 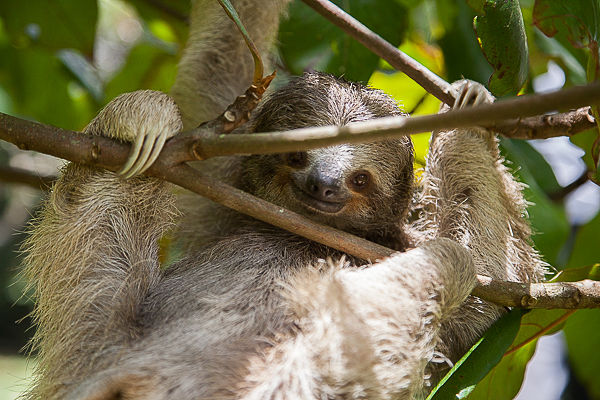 A sloth in the Selva Verde

Five minutes before the park opens Poàs volcano we are already there in front (10 USD). The visit includes both the crater and a small lake of a sparkling blue (the botos Lagoon, but don't be fooled by its idyllic air, its waters are acidic) with a short journey into the forest.


We go down to our hotel in time for breakfast then take the car back and go in search of the Toro waterfall (10 USD) which will prove to be a nice find. Arrival in San Josè in the evening.

Today is a day of travel from San Josè to The Carrillo a delightful village overlooking the Arenàl Volcano, an excellent alternative to La Fortuna, much more touristy. Among other things, it is not every day that you have a hostel for 12 USD per night with a Jacuzzi.

Today visit Tenorio National Park and hike into the forest to see the famous one Rio Celeste waterfall. You know when as children we drew rivers with pastel blue? Here more or less the color is that. Overnight in El Carrillo again. 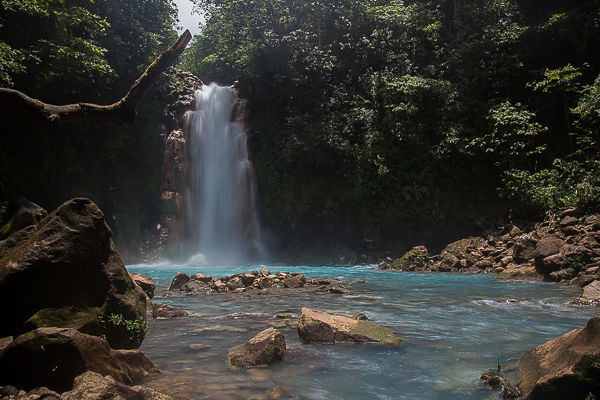 Visit in the morning to the Catarata de La Fortuna (10 USD) and at two o'clock departure for Monteverde. We booked the famous Jeep-boat-Jeep  (20 USD) the fastest way for a backpacker to travel between La Fortuna and Monteverde. Clearly not even the shadow of a jeep, in reality it is a very ramshackle van.

But we have an insane passion for buses and uncomfortable travel.

We arrive in Monteverde at the Sloths Backpacker (40 USD double room with bathroom), an excellent hostel and we immediately book for the day after the Canopy-Tour (45 USD), superman flight, walk on the suspension bridges and coffee tour. In short, it will be a full day.

Full day. Wake up at seven and we leave for Canopy  tour. Among all those available we have chosen the Selvatura because the only one that takes place completely in the primary forest. The flight to the final superman for 1000 meters above the forest is the icing on the cake of a thrilling 3 hours spent whizzing through the trees. Immediately after a walk in the forest on the Hanging Bridges, nice but too expensive (30 USD). 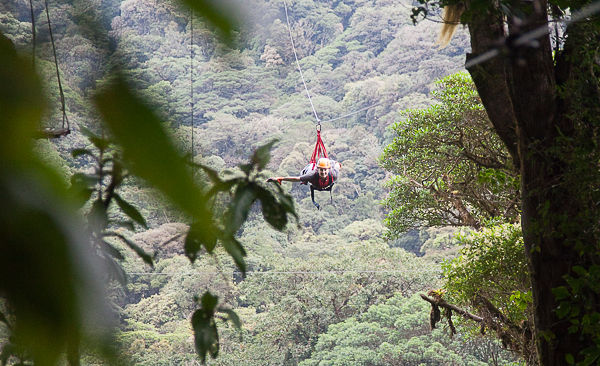 My first "flight" over the primary forest

Return to the hostel and immediately depart for the coffee tour (35 USD). I broke my balls so much that I didn't want a thing for tourists that eventually the owner of the hostel called a friend of his with a small plantation. It was just us: beautiful.

Departure by bus from Monteverde at 4 am and arrive in Liberia. Attention you have to change buses in La Irma which is not a town as we thought, but a restaurant with an adjoining petrol station. Ask to get off there, cross the street and on the other side is the stop for the other bus. 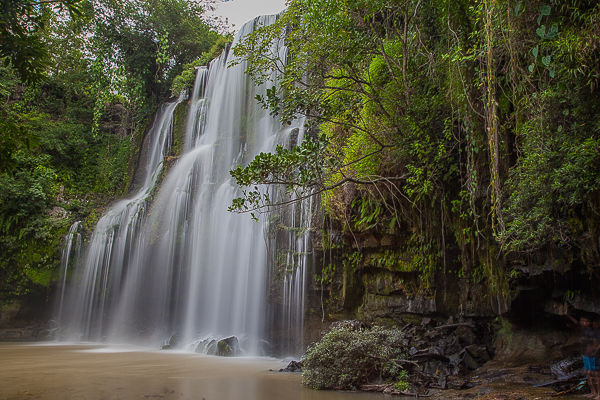 After looking for the hotel for a couple of hours due to the useless information on the Lonely Planet we catch one of the first buses that go towards the coast and let the driver leave us in front of the detour to the Llanos de Cortez waterfall to which we arrive on foot after a kilometer of dirt road. Even the Lonely Planet mentions this waterfall as the most beautiful of all because it is not at all touristy and with a beautiful beach. In short, if you want to spend an afternoon of celebration like the real Costa Ricans, this is the right place.

Ah and it's free which never hurts.

Terrible grind, I don't know how else to define it. But it's worth it. Visit Rincon de la Vieja National Park (USD 15) with its fumaroles and bubbling mud pools and then visit the waterfall Cangreja, to which to get there you have to follow a path of about 5 km.

On the way back, we load up our rucksacks and take the bus to Tamarindo. We will arrive at nine in the evening destroyed after almost two hours on the bus and mostly the hostel we will end up in is the worst we have caught on the whole trip.

Days given to relaxation on the beach. One night we booked the turtle nesting excursion (45 USD), the others went to sleep early.

Displacement a Manuel Antonio. On the way we will see the famous crocodile bridge which is also not mentioned in the LP. 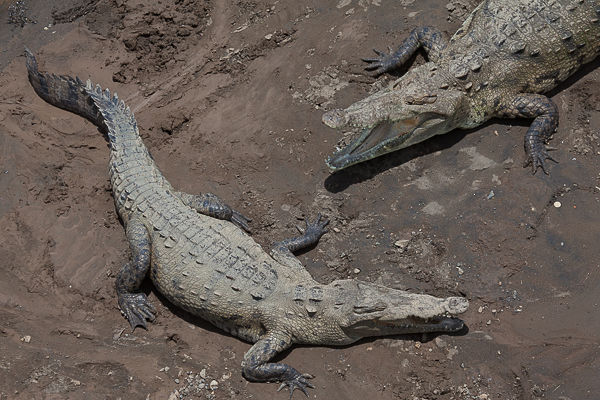 Crocodiles under the bridge over the River Tarcoles

Visit of Manuel Antonio National Park  (10 USD) and in the afternoon transfer by bus to Uvita for the whale festival. We arrive in torrential rain when it is now pitch dark. Finally we are off the tourist track and it shows, to find a hostel we walk for an hour in the dark in the middle of the mud and in torrential rain. 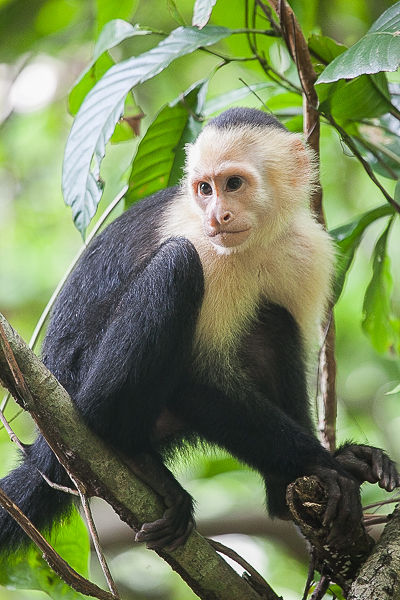 Return to San Josè and visit the city center and the Centràl Market. Departure the following day

I liked Costa Rica and I liked the fact that Costa Ricans are so attentive to a subject that I care a lot about and that is the environment that surrounds us. Costa Rica has invested in eco-sustainable tourism and the results are visible. Although the surrounding nature is luxuriant and above all it is protected and preserved, the accommodation facilities are perfectly integrated within it, allowing the tourist / traveler to fully enjoy it without giving up the comforts of a good category hotel. All ecolodges have hot water and private bathrooms, restaurant, wi-fi and most of them also have a swimming pool.

I generally prefer something more basic, but I assure you that sleeping in the middle of the forest in a comfortable lodge and falling asleep listening to the howler monkeys has its effect and I have enjoyed it to the fullest.

If I were to go back, however, perhaps I would change the itinerary, replacing Monteverde with Corcovado (which they told me spectacular) and trying to include at least a couple of stops on the Caribbean coast (Puerto Viejo and Cahuita)

Despite my article in which I jokingly defined it a country for old people, I really enjoyed this Costa Rica. I filled my eyes with its green, so much so that if I still close them I can perfectly see the images of the jungle around me. I filled my ears with the chirping of birds and the sound of moving trees swept by a gentle breeze and smelled the warm air during the rains brought by the monsoon.

I listened to it, tasted it, smelled it and it stuck to me.

And now it's pure nostalgia, I close my eyes for a few more minutes so I can sweep away the concrete that surrounds me for a while and find myself still there.

Krakow, How to Go from the Airport to the City Center ❯

add a comment of Costa Rica do it yourself, travel itinerary