What is the best guide to visit Costa Rica? I asked myself before leaving and for weeks I have been busy on blogs and forums looking for an answer.

The outcome of my research was a little bit uncertain. In short, some said that one was better, others another and others still another so with painstaking patience (I don't have mine, I had to make it come) I skimmed the answers, I made some small statistics and in the end it turned out that the two best guides for Costa Rica were there Lonely Planet and Moon Handbook (written not by chance by the award-winning Christopher baker and which is very strong in the USA despite being practically unknown here). 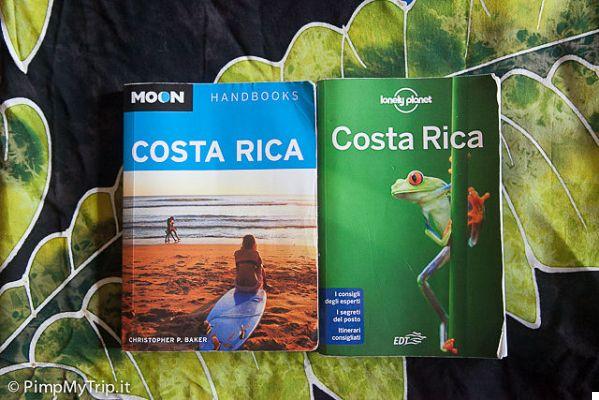 So I decided to buy them both for test them in the field and decide which of the two was in my opinion the best.

As soon as they are picked up and leafed through, the two guides are different.

Lonely Planet has dimensions slightly larger despite having fewer pages (575). The pages are thick and strong, the cardboard cover is sturdy but foldable. Overall it denotes a certain sturdiness even in the case of "wet" accidents which is great for people like me who put it in their backpack.

The Moon has a smaller size, a greater number of pages (687), but very thin which makes them extremely easy to tear.
Made entirely of recycled paper (and a round of applause for them here) it also has a stiffer cover although not as robust as that of the LP.

This is the first major difference between the two guides. L' index it is very important if you want to do a quick search.

I found the analytical index of the Lonely Planet very poor, even in some cases useless for the way it was conceived, while that of the Moon is rich and makes simple whatever research is done.

The analytical index of the Lonely is also extremely thin, the number of pages in fact of which it is composed already speaks for itself: 8 pages of the Lonely Planet against 15 of the Moon.

General information of the book

Both guides have an exhaustive general information section: both deal with issues such as safety, necessary documents and vaccinations, means of transport and travel with children.

Lonely Planet deals in more depth with topics such as surfing, diving or kajaking and in general I found it better in this respect.

The greatest difference between the two guides can be seen by looking at the maps and maps. I took the map of the same place (La Fortuna) on both the LP and the Moon and compared them.


Let's see that of the Lonely (attention, in the paper guide the map unlike this one below is NOT colored): 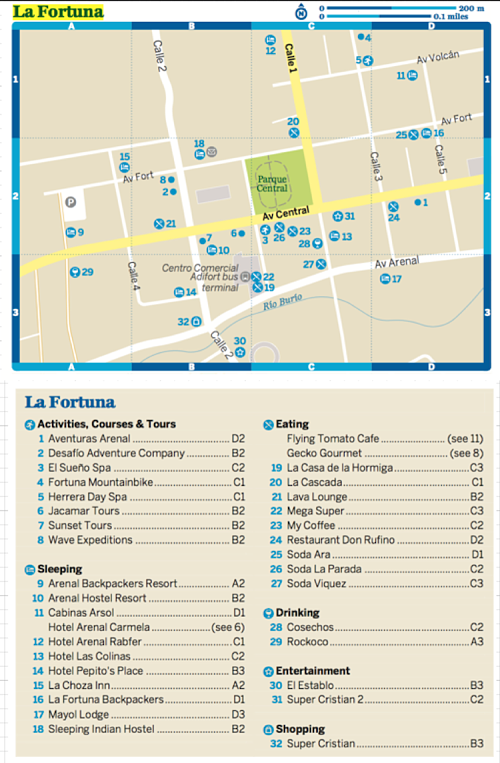 Map of La Fortuna from the Lonely Planet

And here is instead that of Moon: 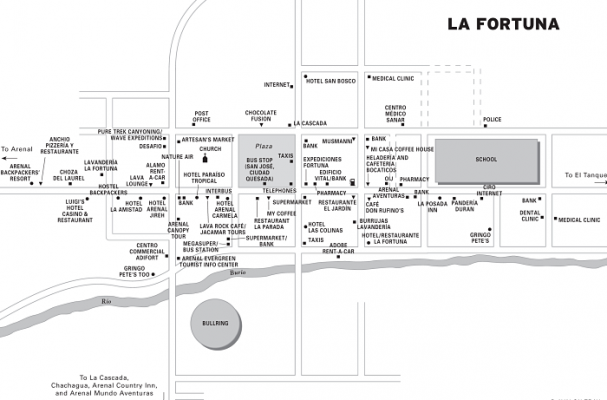 Map of La Fortuna from the Moon Guide

La map of the Moon it is much clearer. The various names of streets and places of interest are written directly on the map (which is also larger in size) which makes it easy to use. The LP map, on the other hand, has only one symbol, is smaller in size and the index is often on another page which makes it less easy to consult.

But the big difference in my opinion is that there are Moon on the map indications also of a practical nature: dental clinic, medical center, post office, even the laundry, pharmacy, bank etc etc etc. On the contrary, that of the LP, apart from the bus station and the shopping center, does not give any other information other than commercial premises, tour operators and local agencies, places to eat, sleep and shop.

Both guides deal more or less in depth with the various places in the country. Personally in Lonely, in addition to some gaps, I also found gross errors that lead me to think that those who wrote it in some places have never set foot there.


I bring one, or rather two striking examples.

The first concerns La Fortuna (always her eh). The description of the LP is as follows:

"With crowds of tourists and anonymous neighborhoods of gray apartment buildings ..."

Ok, La Fortuna is certainly not the most beautiful place in the world, but from here talking about gray condominiums there really goes a long way. In my three days I only saw a three story building, the rest were all one or two and mostly all colored. Mah.

The second is instead a detail concerning Liberia. The description of the LP is as follows:

"The roads in central Liberia are very well signposted - a real rarity in Costa Rica ..."

Here too, despite myself, I must admit that in my opinion the author was not in Liberia because this information is absolutely not true: in the center of Liberia there are almost no road signs.

These are just examples, but I could give you some others.

Both guides devote many pages to the choice of hotels, hostels and restaurants. For restaurants I generally don't follow the guides, while I do a lot for hostels since I never book them before arriving on site.

On the other hand, I clearly couldn't test all the hostels listed on both guides so my ratings are based on only a few of them.

Again I must say that the only hostels chosen on the Lonely did not reflect in my opinion what turned out to be the real situation. Here too there is a very strong impression that the authors did not visit the places but based on previous judgments.

From this point of view, the Moon seemed more precise to me and the real situation of the selected hostels reflected the description on the guide. 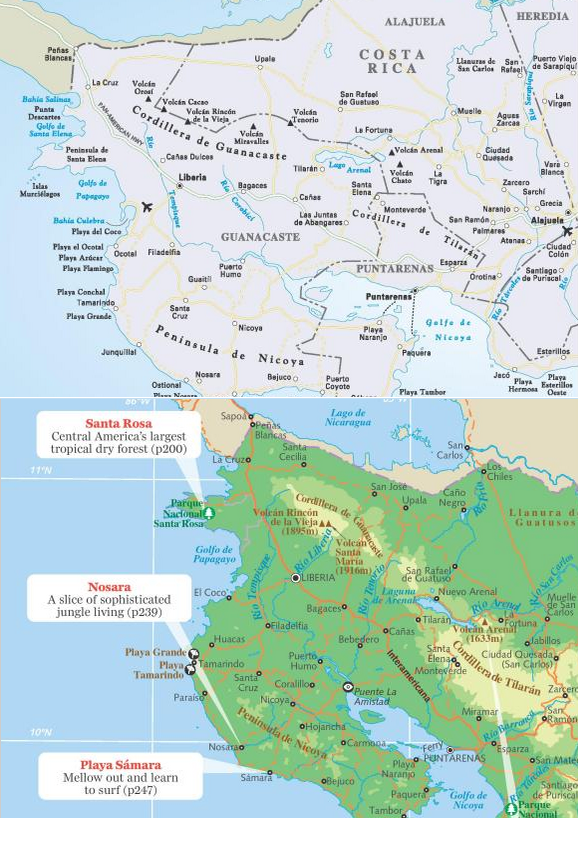 Costa Rica Map - Moon (above) and Lonely Planet (below)

The Lonely Planet is more expensive: 26,50 euros against the 21,99 US dollars of the Moon. Keep in mind, however, that the second can only be purchased online and through Amazon, so you must also add a nice sting of shipping costs to the price.

Personally, this edition of the Lonely Planet it did not leave me completely satisfied, indeed in some places I found it almost irritating, especially as regards the maps. The only two hostels that I picked on the fly on the guide turned out to be different from the description and this puzzles me. Also, I found some information that made me think that the authors in that place never set foot there. The feeling that this guide still lives thanks to the legacy of a glorious past continues stronger and stronger in me, but that it is slowly destroying itself. I also found it much more attentive to the commercial aspect than to the informative one. Good information on transport. Despite is still a good travel companion, the question is: how long will it remain so?

At the editori Lonely Planet: please I want my old "Lonly" back!

La Moon it was a surprise even if I thought it was a good guide given the excellent comments on the forums. Although I found some shortcomings (I could not find any mention of the gorgeous Plains Of Cortez), I really enjoyed the guide. Clearly it is an American guide written for Americans and this is noticeable. In addition, the edition is only English, it is not translated into other languages, which is a limitation. The maps are clear and detailed, the descriptions of the hostels and hotels are consistent with reality (at least for the ones I've tried) and I like that are still divided according to the price range. The guide is exhaustive in dealing with the topics. It is not a guide for backpackers, but I already knew that. The information on transport is also good even if I have not found mention of the famous Jeep-boat-jeep to move between La Fortuna in Monteverde (information that is instead present on the Lonely Planet). In any case I think at least for the Costa Rica right now this is it best guide on the market.

The Lonely Planet edition used is that of September 2013, that of the Moon is the edition of October 2011, but one was released after December 2013, certainly more updated.

Do you agree with this review? In your opinion, was there any point that I did not take into consideration and that you consider important? If yes please let me write it in the comments so others can read it too. Thanks!

When to go to Costa Rica, Best Month, Weather, Time of year

add a comment of Lonely Planet Vs Moon, field challenge: which travel guide for Costa Rica?