Split, What to See and Do and Why I WON'T Go Back

The journey for visit the Plitvice Lakes it also gave me the opportunity to spend a few hours in the city of Split, the largest in Croatia among those overlooking the Adriatic Sea.

Despite the few days available, and despite the fact that Croatia has left me a lot in terms of emotions, there have been some episodes that have left me dumbfounded and because of which, although I think it is absolutely worth visiting the city at least once , i personally would not stay there again. 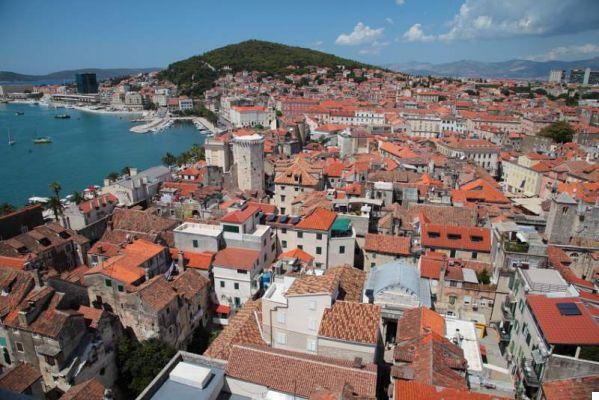 Split view from the Cathedral Tower

Split it is a nice and very lively city, as it overlooks the brilliant waters of the Mediterranean and it could be very beautiful if instead of making it a tourist trap they had tried to keep it less commercial.

I am not referring only to the somewhat tamarri shows to which fake centurions lend themselves in order to scrape together a few coins, but above all to the tide of stalls positioned everywhere, even right in front of the facade of Diocletian's palace and to the bars / clubs that try to catch tourists like fish in the sea as soon as they have the misfortune to pass “close at hand”.

GUIDED TOUR OF SPLIT IN ENGLISH

If you are looking for a guided tour of Split this guided tour in English is the one for you!

Split, what to see and do 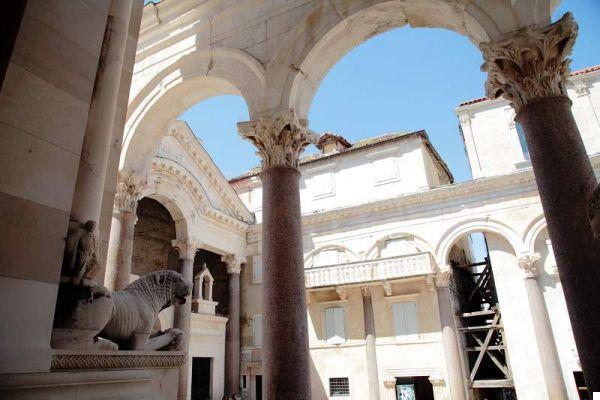 What to see in split: Diocletian's palace

Definitely the top of the things to see in Split. The Diocletian's palace it is one of the best preserved Roman monuments and you can still see it today to guess its magnificence in the past.

Its heart, the peristyle, that is, the central square which faces the entrance of the imperial residence is unfortunately invaded by stalls and by people sitting while sipping cocktails; from the peristyle through a staircase you go down into the basement, also full of stalls that sell everything from paintings to bracelets, used books, and in which exhibitions are often set up.

Despite this, the basements retain their ancient charm.

See the city from the Marjan gardens 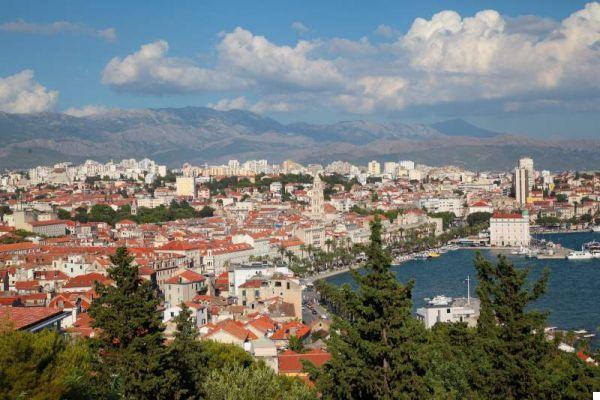 Split panorama from the Marjan gardens

Probably if the season had been more suitable I would have appreciated it even more, but despite the suffocating heat, it is absolutely worth it to walk the stairs that lead up to the terrace of the Marjan gardens from which you can enjoy a beautiful view of the old city.

A nice place with an outdoor area protected from the sun is the ideal refuge to shelter from the heat and the sun's rays, sipping an ice-cold beer and letting the gaze sweep from the sea over the roofs up to the mountains, the Dinara mountain range.

Climb the bell tower of the Cathedral

Wherever there is a tower or bell tower it is worth going to the top to see the city from above and Split is no exception.

The bell tower of the Cathedral of San Doimo (57 meters high) is located exactly in the center of the old city and from up there you have a great 360 ° view over the rooftops.


Be careful not to find yourself near the bells when they start to ring (as happened to me).

Spend half a day at Firule beach 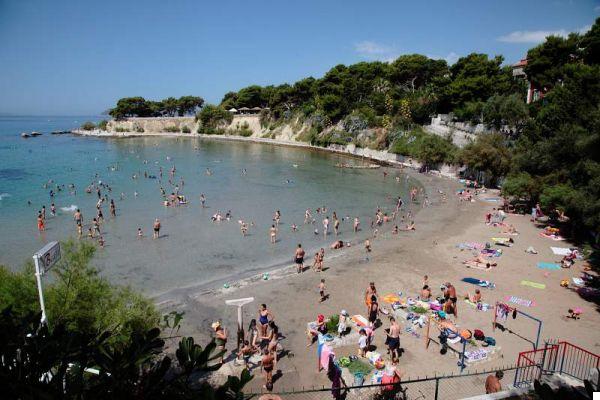 The small beach of Firule

A truly delightful discovery is this intimate and sheltered sandy beach where families from Split come to spend their afternoon.

More hidden and smaller than the nearby beach of Bacvice where most tourists stop, Firule it is really the ideal place to stop for a swim, take a few hours of sun and in the evening sip an aperitif watching the sunset from the raised bar above the beach.

Already the whole old town of Split could be defined as a large open-air museum.

I museums in Split they are not of the size, or the importance of famous European museums, such as the Stockholm vase for example or The Uffizi in Florence. However, if you are in the city for a couple of days or more, some are worth a visit.

Il Split city museum, located in a XNUMXth century Gothic palace, is small and the visit is quite quick. It offers a good overview of the history of the city and its development through the times.

Il Split Ethnographic Museum displays pottery, traditional clothing, furniture, jewelry and other artifacts from the life of Split's inhabitants throughout history. It is located in the old town and the entrance fee is very affordable.


The Split Archaeological Museum is the oldest museum in Croatia and displays artifacts from the Greek, Roman, Early Christian, Medieval and Prehistoric eras. It is a 15-minute walk from the historic center.

Il Split Live Museum it was first opened in 2015. It is located in the old city, not far from the Golden Gate. It shows the daily life of the Romans, at the time they lived in these areas.

Other museums include the Museum of Croatian Archaeological Monuments and maritime museum.

Where to eat and where No

A Split find a place where to eat it is really easy, given the number of restaurants and tourist spots that are located within the old city. Many are expensive but offer the freshest fish.

For those who do not like to eat lunch and dinner at the restaurant there is no shortage of bars and places that serve quick meals such as salads, sandwiches and slices of pizza.

Even though it is recommended to you, the Fifa Buffet restaurant is to be avoided.

Comments on the internet have confirmed that this place, famous for its super-hearty dishes, often offers food of not the highest quality.

In any case, the waiting line to enter is long, probably because the restaurant is recommended on a famous travel guide.

Sleeping in Split it really is the least of the problems for a traveler. As soon as you get off at the bus station you are literally attacked by people who rent rooms or apartments.

Better to try to choose someone who speaks English, in order to be able to communicate: many people among them in fact only speak Croatian. 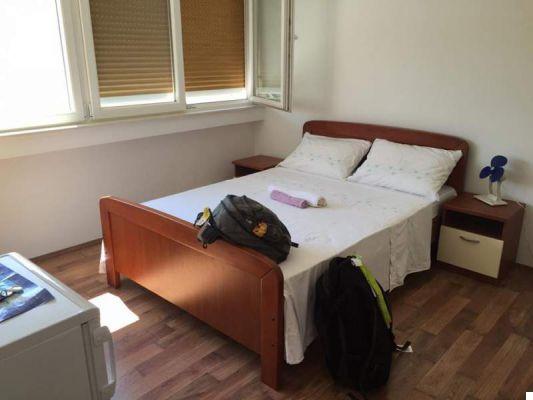 In Split, many people rent apartments directly on site

You can also rent a room in advance on Booking.com, recommended if you go in high season when it is better to book early.

Here are some good choices:

For whom instead prefers a hotel, the choice is still wide even if, given the influx of tourists in the summer season, it is certainly better here too to book in advance to grab the best seats.

How to get there and get around

Split is easily accessible by plane, by ferry e with your own car.

The international airport, Split Kastela Airport, is located near the town of Castelli, about 25 km from Split.

THEairport so it is quite far, but the shuttles that connect it to the city are frequent. Better buy the ticket directly from the driver since it costs slightly less than at the ticket office.

In the high season, it is advisable to buy a shared transfer.

An alternative way to the plane to get to Split is with the ferry that connects it (starting exclusively from the port of Ancona) efficiently. In summer, ferries are very frequent.

Ferries to Split you can book them HERE from the TraghettiLines website.

Also move it is very easy. Although the car is the best way to visit i Plitvice lakes, as it allows you to freely choose the times and therefore avoid queues, it is also possible to go there by bus.

To visit Plitvice an excellent choice is also this GetYourGuide tour.

Transport to the lakes is not very frequent, but it is still feasible.

From Split you can reach all the main destinations in the country by bus.
Buses run every 30 minutes, from 5 am to midnight. Night buses do not. 39 and n. 40 have run every 60 minutes even after midnight. Tickets can be purchased at any kiosk or directly on board. Download the Split bus map HERE.

Rent the car in Split can only be useful if you plan to take day trips or go on your own holidays on the road in Dalmatia. Otherwise, the car can be a burden, as you need to think about parking and heavy traffic. Check here for more information and latest prices on car hire in Split.

I taxi they are quite expensive and not worth it unless you are a group and can therefore split the cost. 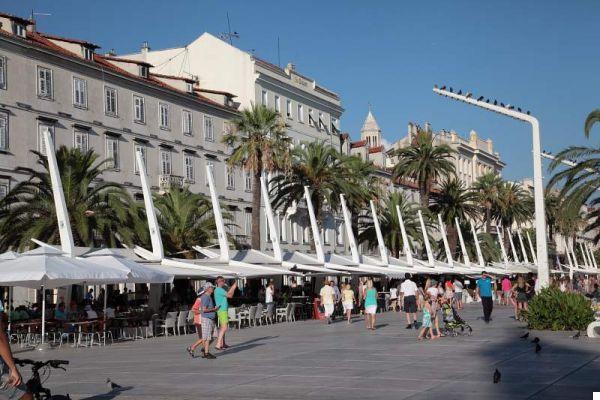 Despite Split is really pretty and shouldn't be missing in any of them itinerary in Croatia I personally, now that I have visited it, would not go back.

The beauty of traveling for me it's not just knowing what to see and what to do in a certain place, but it is above all being able to create a feeling with that place and with the people who live there.

In spite of all this I a Split I did not find it: the way in which I was treated by people (I am referring in particular to some episodes related to waiters and drivers) did not make me feel absolutely welcome, but rather the feeling that I felt stuck on me was that to be seen as a necessary evil, which one would gladly do without but which cannot be renounced.

Surely the period of the summer holidays did not play in my favor, that is the peak period for business for the managers and workers of the premises, certainly afflicted by the stress that derives from excessive work, and for which probably during the winter season the business it almost boils down to the bone.

Any way anyone going to Croatia is advised to visit the city of Split, what to see and what to do then you can decide even on the spot without planning anything in advance as, although the activities are not many, they are still enough to spend at least a couple of days without getting bored.

Stockholm, What to See and 4 Really Unusual Things to Do ❯

When to go to Croatia, Best Month, Weather, Climate, Time

Where to sleep in Zadar: best areas and hotels to stay

Dalmatia On the Road, Exploring the Best of Croatia

What to do and see in Dubrovnik: the best attractions

How to organize a trip to Croatia

Where to Stay in Krakow: A Practical Guide to the 5 Best Areas

add a comment of Split, What to See and Do and Why I WON'T Go Back