Organizing a trip to Paris: cost, how and where to book

Are you looking to organize a trip to Paris? You want to know how one is organized low cost holiday in the French capital? In this short guide we will give you useful tips for visiting Paris, one of the most beautiful cities in the world, spending little or not much.

The capital of France, located in the northern part of the country, is a geographical, economic and cultural center, but it is also one of the most visited cities in the world. Paris is a surprising, elegant and sensual city, with a glorious and tumultuous past, and a vibrant present that attracts international attention.

Paris it is a seductive city, full of majestic buildings and museums known all over the world, full of large gardens where you can stroll and relax, restaurants and pubs where you can taste the best dishes of the renowned French cuisine. Instantly recognizable for its iconic architecture, it is a constantly evolving metropolis.

Forerunner in artistic creation of all kinds, Paris is constantly on the cutting edge in innovation in many fields, from arts and culture to fashion and gastronomy. Whether it's shopping, sightseeing or dining, it's hard to find a better place than the most visited city in the world.

How to organize a trip to Paris

Plan a trip or vacation to Paris it's very simple. First you have to book the flight, then the accommodation (hotel, apartments, bed & breakfast, ...), and finally the activities you want to do.

After doing this you can deepen the various aspects of the trip, how to get around the city, where to eat, what to pack, ...


How much does a trip to Paris cost

The cost of a trip to Paris varies based on many factors: travel period, duration of the trip, quality of the services chosen and activities to make choices, and especially from the earliest time the entire trip is booked.

The minimum cost of a ticket for the flight for Paris it is 20 euros, but the average rates range from 50 to 100 euros, to go up to over 200 euros.

The rates of Lodging in Paris they start from 50 euros for a double room per night in the more peripheral areas, to exceed 100 euros in the central areas of the city.

Spending for eat in Paris it varies a lot from where you want to have breakfast, lunch and dinner. If you choose fast food like Mc Donalds, the prices are the same as in Spain, a menu costs from 6 to 10 euros. If you prefer to eat in elegant and refined restaurants, especially in central locations, over 100 euros per person.

The cost of activities and attractions it is variable. To save money, you can buy tourist cards that include tickets for attractions, activities and transport, even saving enough if you have to visit many places.


How to reach us

Getting to Paris is very simple, there are over 10 airports that have direct flights with the French capital: Milan, Venice, Bologna, Pisa, Rome, Bari, Brindisi, Palermo, Florence, Catania, Naples, Genoa and Turin.

A third airport, Paris Beauvais, it is mainly served by low-cost airlines. This is the airport most used by the Spaniards who reach Paris. All Ryanair flights to the French capital land here, but also those of Volotea and WizzAir.

How to book a flight to Paris

To book a flight to Paris, both scheduled and low cost, the best way is rely on search engines. These portals instantly check the fares of the various airlines for the selected dates and airports, and propose the best choices based on the duration of the flight or the cost of the flight.

Look for an offer and book a flight to Paris

As for the hotels available, Paris boasts the largest concentration of hotels in the world, with one vast and varied offer in terms of quality, prices and services. The less central ones are cheaper and suitable for young people, but well connected to the center of Paris by public transport.

The cheapest way to do and see the main and best attractions in Paris is by purchasing the Paris City Pass which includes free admission to 60 museums, attractions and attractions. In addition, it allows you to use the metro, bus, train and take a boat ride on the Seine for free.

It only takes a few names of attractions to justify its tourist success in the world. Monuments such as the Torre Eiffel,Arch of Triumph Notre Dame Cathedral,Obelisk,Opera Garnier or Louvre Museum are some of these names.

But these are just some of the attractions of a city full of charm and monuments such as theHotel invalid, Pantheone Sacred Heart Basilica and Orsay Museum.

To fully enjoy Parisian life you have to walk its streets, visit one neighborhood after another, do a boat trip on the Seine, stroll along the Champs-Élysées or go shopping in many prestigious department stores and boutiques.

It is advisable, during a trip to Paris, not to miss the visit of the legendary Disneyland Paris amusement park. There are also other amusement parks around the French capital, such as Parc Asterix, but Disney's realm of magic and fantasy is not to be missed.

In addition, Paris is a city full of life, where shows and events such as exhibitions, concerts, ballets always take place, not only in prestigious places like the Moulin Rouge or the Châtelet, but also in small theaters or cafes.

Tips for a cheap trip to Paris

To organize a holiday or a cheap trip to Paris, here are some important tips to follow in order not to spend a lot.

Plan well in advance the trip e book now flight and hotel. The cost of the flight and accommodation rates increase as the travel period arrives.

Choose fewer days for the trip, even 3 days is fine to see the main sights and attractions of the city.

Paris restaurants are very expensive, if you want to save a good choice is eat in fast food restaurants, you can save a lot.

For attractions choose the tourist cards, which overall have a lower cost than buying tickets individually.

Here are some useful tips to help you plan your trip to Paris even better.

To visit the city it is advisable to move using the public transport. You can choose to use the metro, buses or the RER, which completely cover the city and allow for comfortable, fast and cheap travel.

The bus, metro and suburban rail network (RER) of Paris is divided into 5 areas. Tickets are valid for both buses and trains and can be purchased at stations or kiosks.

Le transport cards they are valid for one to five days, and can be purchased at the airport, metro stations and tourist information stands.

To cut costs you can buy a Teleconferencing of 10 tickets for 14,50 euros, instead of a single ticket, the cost of which is 1,90 euros. Or you can choose to buy a subscription or ticket valid for five days which costs 34,70 euros.

Il best period is that between April and July, and from September to October, with average temperatures between 15 ° and 25 ° C. During the Christmas time the city is dressed in many decorative lights and a romantic atmosphere is felt in the air. January is the best time to take advantage of the sales and make good purchases.

Auguston the other hand, it is a hot month but it can be excessively crowded, some places are closed and the staff are on vacation. The months between January and March they are cold with average daytime temperatures just above 0, with a few hours of light and probably with rain, frequent during the winter. 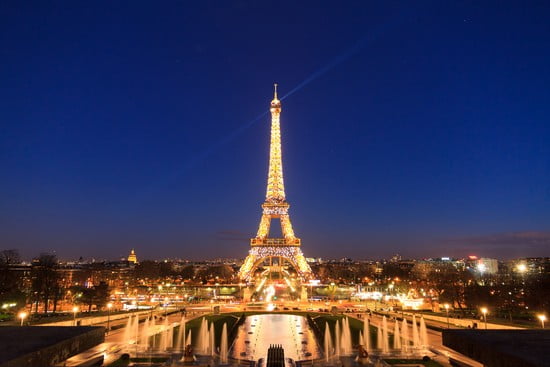 add a comment of Organizing a trip to Paris: cost, how and where to book