Visiting Thessaloniki: what to see and do, where to sleep and how to get there

Thessaloniki is the second most important city in Greece and the second largest port in the country. Founded in 315 BC, the city has a rich history, marked by Roman, Byzantine and Ottoman influence. Visiting Thessaloniki is beautiful at any time of the year, although the best times are from spring to autumn.

La città offers many things to see and do, and if you visit it in the summer you can combine it also a nice beach holiday in the peninsula of Chalkidiki (Halkidiki). Thessaloniki has over time become a multi-ethnic city, which now has almost 360 inhabitants, an industrial and commercial city, but also a city of art, known for its beautiful Byzantine churches.

A city ​​of contrasts, rich and full of life, which seduces you when you walk through its streets, when you discover the beautiful Byzantine churches, Roman ruins, museums, markets and its waterfront.

Thessaloniki is also there cultural capital of Greece. Many of its social events are of particular interest, including the various festivals such as that of cinema or music, or the numerous traditional festivals.

What to see in Thessaloniki

- The White Tower it is the symbol of Thessaloniki and a great landmark in the city. In the 19th century it served as a prison, but now it is an interesting museum of the history of the city. From its top you can enjoy a panoramic view of the city.

- TheAgora, dating back to the XNUMXrd century BC, it was an important public square during the Hellenistic and Roman period.

- Thebow and Galerio roundabout, Roman monuments of the fourth century, built by the emperor Galerius.

- There are many interesting museums in Thessaloniki such as: the Archaeological Museum, useful for understanding the history of the city, the Museum of Byzantine Culture with its amazing exhibits, the Cinema Museum, the Olympic Games Museum and many others.

- In the city there are beautiful Byzantine churches, full of icons, such as: the impressive church of Agios Pavlos which can be seen from the ramparts, or the large church of Agios Dimitrios which celebrates the patron saint of Thessaloniki and the church Agia Sofia (Santa Sofia ).

What to do in Thessaloniki

- Don't miss one walk in the old town of Thessaloniki, called Ana Poli, surrounded by ramparts. It is a labyrinth of narrow streets where it is nice to get lost in random paths, among colorful houses. 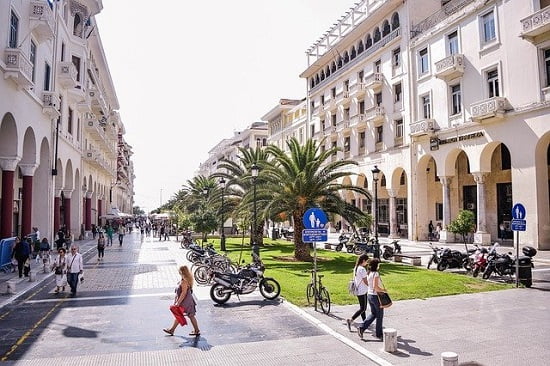 - Discover the gastronomic culture, visiting the stalls of the Bezesteni market, where you can find wonderful fresh and tasty local products.

- Thessaloniki is a great city for shop. Here you can find everything from luxury boutiques to cheaper but well-stocked shops. The two main shopping streets are Egnatia and Tsimsiki.

- Thessaloniki is the ideal location for party, is a lively, young and animated city every night of the week. The neighborhoods full of bars where you can have a drink and dance are Valaoritou and Ladadika, quite close to each other. Another good area is the White Tower, with lots of trendy cafes and bars.


- You can take advantage for visit the surroundings of the city. The area is full of attractions and beautiful landscapes, archaeological sites, mountains, countryside and of course beaches not far from Thessaloniki.

To visit i archaeological sites of Pella and Vergina which trace the history of Alexander the Great. You can spend some wonderful time beach holidays on the peninsula of Chalkidiki (Halkidiki), where the sea is crystal clear and the beach is lined with villages where you can enjoy cheap Greek dishes.

Where to sleep in Thessaloniki

Thessaloniki offers accommodations for all tastes, from hotels to B & Bs, from tourist apartments to holiday homes, but also hostels and couchsurfing. The best areas to stay are the areas around Aristotelous Square, via Egnatia, Ladadika and the seafront.

Thessaloniki it is one of the cheapest cities in Greece where to sleep. In addition to the fairly inexpensive hotel and accommodation rates, almost all hotels offer free cancellation, which will make your stay even more enjoyable and relaxing.

How to get to Thessaloniki

THEplane is the most comfortable and fastest way to get to Thessaloniki. The city is well connected, not only with the various airports, but also with the main European airports. From here you can also leave for the numerous Greek islands.

There are direct low cost flights to Thessaloniki, but you need to make a stopover.

La flight duration is less than 2 hours and ticket fares are very cheap, especially if you book well in advance or if you visit the city during the low season. The Round trip fares start at 20 euros per person.

Find a flight on offer to Thessaloniki 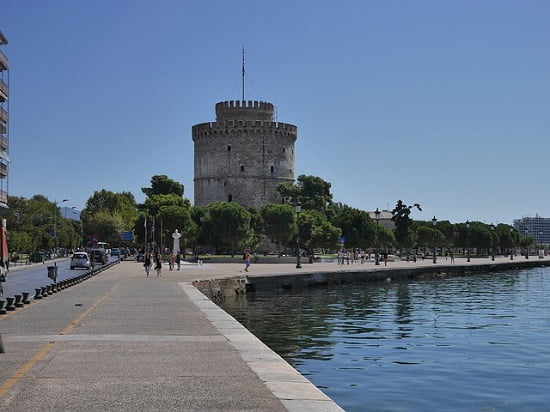 Thessaloniki waterfront - Image from Pixabay
Visit San Marino: how to get there, what to see and where to sleep ❯

add a comment of Visiting Thessaloniki: what to see and do, where to sleep and how to get there