The island of Rhodes is full of beautiful beaches with crystal clear sea. Let's discover them together starting from the north to the charming beach of Prassonissi, located at the southern tip of the island. 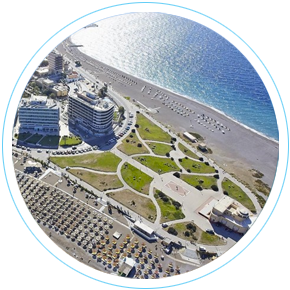 Elli Beach is located in the town of Rhodes, you can rent an umbrella and two sun beds for a cost of 8 €. Although the beach is in the center of Rhodes, the sea is clear.

Elli Beach is surrounded by residences, hotels and apartments that meet the needs of all types of tourists.


The peculiarity of this beach is that it is divided by the Rhodes Aquarium into two zones, one sandy with calm sea and sheltered from the wind and the other more exposed to the wind and often rough sea. 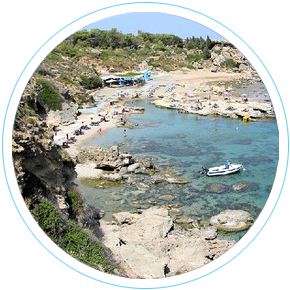 Kalithea beach is considered one of the most beautiful beaches of Rhodes and is therefore one of the most popular, thanks also to its proximity to the town of Rhodes, just 7 kilometers north.

The beach, almost 5 km long, is formed by several inlets and coves, has golden sand, crystal clear sea and is surrounded by vegetation among pine and palm trees.
It is possible to reach Kalithea Beach also by sea by boats leaving from Rhodes Town.
This beautiful beach is then embellished by the ancient seaside resort buildings (built by the Italians in the early 20th century) that make it a unique and fascinating place. 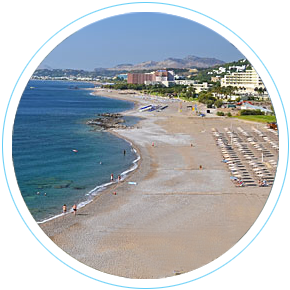 Faliraki beach is very crowded in summer and is equipped with all kinds of services, rental of sun loungers and umbrellas, and equipment for water sports.

Near the shore there are many restaurants, bars, stores and discos; in fact, young people consider the area to be the best place in Rhodes, especially at night.

It is certainly not among the most beautiful beaches in Rhodes, but the sea is always clear and crystal clear, ideal for bathing and swimming. 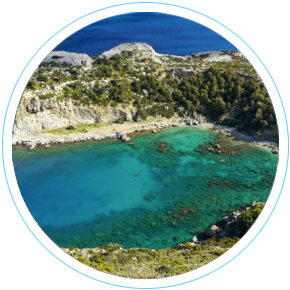 Anthony Quinn Bay is undoubtedly the most famous beach of Rhodes, it is located on the east coast of the island, 15 kilometers from Rhodes Town and only 4 kilometers from Faliraki.
This small beach owes its name to the famous Hollywood star, who played the role of Zorba the Greek. The bay with the emerald green sea is beautiful, the seabed is made of sand and rocks, ideal for snorkeling, less suitable for families with children, due to the sharp rocks.

Tip: in summer it is better to arrive early, to enjoy some peace and quiet, as the beach is very crowded. 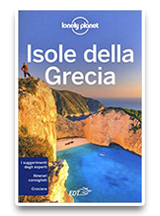 Start with the best guide to the Greek islands

Tips and information for traveling between the Greek islands
Don't leave without Lonely Planet! 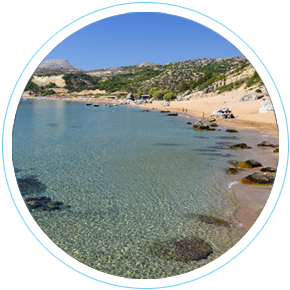 Tsambika beach is located on the east side of the island, 26 kilometers south of Rhodes Town, near Archangelos and about 15 kilometers from Faliraki.


It is one of the most beautiful beaches of Rhodes, 800 meters long with fine golden sand and crystal clear sea with shallow waters suitable for children.

The beach is equipped with umbrellas and sun beds at a cost of 8 €, there are also taverns to eat and public toilets.

Do not miss the monastery of Panagia Tsambika, built on top of a hill with a breathtaking view of the sea. 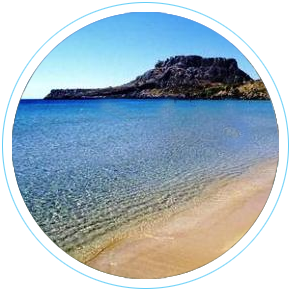 Another quiet beach is Stegna, located about 29 kilometers southeast of Rhodes Town, near the village of Archangelos.

It is a sandy beach, with some rocks in the water, the sea is crystal clear and transparent.
The beach is equipped with sunbeds and umbrellas, there is also a free part and there are some kiosks where you can eat. 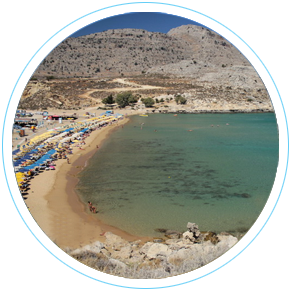 Shortly after Stegna, another Rhodes beach not to be missed is Agathi Beach, truly splendid, according to many, perhaps the most beautiful beach in Rhodes.


It is located a few kilometers from Lindos and is near the bay of Haraki, 40 kilometers from Rhodes Town.
Thanks to its golden sand it is famous as the Golden Beach, the sea is clear, with shallow and sandy bottoms, which makes it very suitable for families with children.

The beach is equipped but there is also space for those who do not want to rent sunbeds and umbrellas. There is no lack of the characteristic kiosks where you can eat. 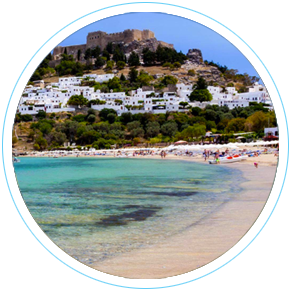 Lindos is located about 50 km from the city of Rhodes. The beach of Lindos is among the most beautiful of the island, with its crystal clear sea and the suggestive view of the acropolis of Lindos and its Castelo.
The waters are clear with shallow bottoms, ideal for swimming. Lindos offers various services such as the rental of sunbeds and umbrellas and several taverns and bars. 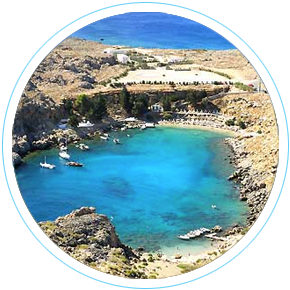 Another beach not to be missed, St Paul Bay is very close to Lindos, also reachable on foot. It consists of two equipped coves, the water is an incredible blue and the sand is golden. The bay is a must for snorkeling lovers.

This beautiful beach is also located in the area of Lindos. Thanks to its circular inlet the sea is always calm. The beach is well equipped with sun loungers and umbrellas, and there are also a couple of tavernas.

The sea is beautiful as everywhere in Rhodes, turquoise, crystal clear and with shallow, sandy bottoms, ideal for a relaxing swim.

A truly beautiful and not very popular beach is Glystra Beach, a sandy and rocky bay with splendid sea, shallow waters and absolute tranquility.

Glystra Beach is located shortly after Lardos to the south, towards Prassonissi. The rental of sun beds and umbrellas costs as usual the classic 8 €, but there is also a free beach. Parking a few steps from the beach is free. There is also a kiosk to eat. 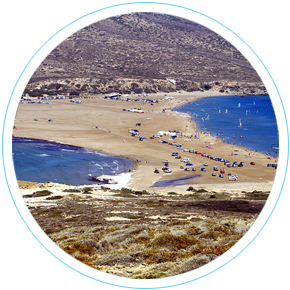 Prassonissi is located at the southern tip of the island and is famous because on one side is the Aegean Sea and on the other the Mediterranean, divided by a strip of sand.

The beach is very windy so it is a paradise for surfers but it deserves at least a visit because the landscape that is presented in front of us is something unique.

Audio Video Best Beaches in Rhodes, Which One to Choose
Where it is, and what to see in Las Teresitas Beach ❯

The Best Beaches of Santorini and How to Reach Them

Where to Stay in Skiathos

Visit the Meteora in Greece: how to get there, where to sleep and much more

Where to Stay in Thessaloniki

add a comment of Best Beaches in Rhodes, Which One to Choose