The Tabernas Desert, the only true desert in Europe, location of various western films

Considered thethe only real desert in Europe, Tabernas Desert is located in the province of Almeria in Spain. The desert area owes its world fame to being there location of various western movies.

The whole Tabernas desert is one protected natural park. It is located in Tabernas, Gádor, Santa Cruz, Alboloduy and Gérgal, about 30 km north of Almería and about 200 km from the tourist city of Malaga.


From the late 50s to the present, they have been filmed in this desert more than 300 film. The most famous western films shot in this desert are those of Sergio Leone with the legendary dollar trilogy with Clint Eastwood.

The climate is arid Mediterranean, with cold winters and very hot summers. Temperatures during the winter are mild, but during the summer, as with most of the Spanish territory, they can get very high. In summer, temperatures can reach and exceed 45 ° C in the shade.

The few rains are usually torrential, so the sedimentary soil, made up of marl and sand and little vegetation, cannot hold water. The only effect of the rains is greater erosion of the distinctive Badlands landscapes.

The best period to visit the Tabernas desert is during the intermediate seasons, that is in spring and autumn, when the temperatures are not excessively high.

When it was discovered as a filming location in the 50s and 60s, it was known as "The European Hollywood". Within a few years it became the main film shooting area in Spain. The greatest success came with the shooting of western films, thanks to the landscape that lent itself very well to this type of film.


One of the directors who contributed the most is Sergio Leone who shot various westerns here, known as spaghetti westerns. The most important is the so-called Dollar trilogy, which includes the first three spaghetti-westerns directed by the Roman director: For a bunch of dollars (1964) Per qualche dollaro in più (1965) and the good, the bad and the ugly (1966).

Another very successful film shot here is Once Upon a Time in the West, played by Henry Fonda, Charles Bronson, Jason Robards and Claudia Cardinale.


Decadence began after the 80s, although music videos and TV commercials are still shot here today. From time to time a few more movies or TV series take advantage of the photogenic landscape of the Almeria desert.

In some desert areas some still remain film sets of the films shot here. These include the fortress built for the Mexican film El Condor, the set of which were later reused for other shootings such as those of A reason to live and one to die (1972), with Bud Spencer and Telly Savalas, La bandera - Marcia or die (1977) with Gene Hackman and Terence Hill and Conan the Barbarian with Arnold Schwarzenegger. Although most of the walls have disappeared due to neglect, some buildings and one of the towers can still be seen. 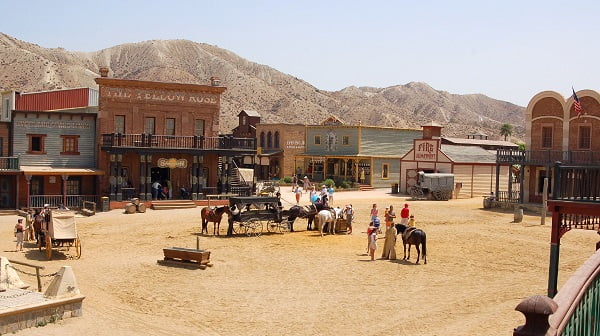 Oasys Mini Hollywood, Tabernas Desert -
The phenomenon of the beaches that light up at night: where and why it happens ❯

Pyramids of Guimar (Tenerife): timetables, ticket prices and how to get there

Where to Stay in Seville: The Best Areas to Enjoy the City

Where to stay in Mallorca: best areas and locations to sleep on the island

add a comment of The Tabernas Desert, the only true desert in Europe, location of various western films