You are planning a trip to London and you want to know which are, both the best areas to stay and which are the best hotel where to sleep in London? In this complete guide we will explain the best ones areas and neighborhoods to stay to visit London and for each area we will show you the best hotels and accommodations to book.

If finding a cheap flight to London is easy enough, especially if you book well in advance or are traveling in the off-season, find a cheap accommodation or hotel in London, especially if you want to stay in the center, it is certainly not easy.

London is not only one of the most beautiful European capitals, but also among the most expensive to sleep in, however in this guide you will find all the information to sleep in a good position and not spend a lot on accommodation.

Best areas to sleep in London

London is made up of 32 districts, with areas more important than others, each with its own different charm. There is no better area to stay than in London, the choice depends on the purpose of the trip, the budget available and the airport where you arrive and leave.


In this guide, however, we will show you which are the best neighborhoods to stay for: visiting the city well, being in a convenient location and also not spending a lot on accommodation. We enclose this too map of the best areas of London, to make your choice even easier.

However, always bear in mind that whatever area of ​​London you choose for accommodation, you will always need to use i public transport to visit this mega metropolis and to move between the airport and the city.

Things to see in London are a bit scattered throughout the city, though most of the attractions are concentrated in the center. So, if you are staying in public transport zones 1 and 2, or if you generally book a centrally located hotel can save you money and travel time. 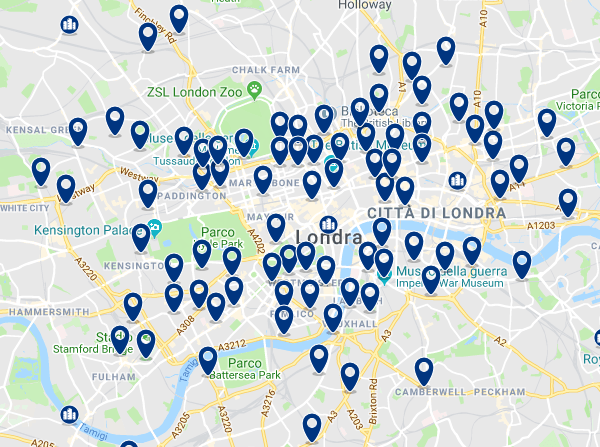 Located in the northern part of the Thames and west of the City, it is the favorite choice of all tourists who visit the English capital. Staying in this area will allow you to move easily on foot or by public transport and reach the main sights and attractions of London, saving transport costs and travel time.


Search for a hotel or accommodation in central London

Westminster: the most touristic area

The borough of Westminster is one perfect area to stay in London, being in a central position allows you to move a lot even on foot. The area hosts many of the main attractions of the English capital, such as: the big ben, theAbbey and the Palace of Westminster, Buckingham Palace, Westminster Cathedral and National Gallery, the National Gallery of London.

situated between the Soho district and the River Thames, is the most touristic area of ​​London, with many bars, restaurants and shops. The area is connected very well to the rest of the city, there are important railway and metro stations, or for those who want to take a ride on the Thames can embark at the nearby pier.

Find accommodation or hotels in the Westminster area

Soho is one of the best areas to sleep in London. AND a leisure area, with many restaurants and a lively nightlife, with many good clubs. Soho also includes the Red light district of London and the unmissable Chinatown, one of the main attractions of the city.

Soho is one of the most interesting, touristic and cosmopolitan areas of London. The neighborhood also represents the center of gay London. In the southern part of Soho it is located Picadilly Circus, London's most famous intersection, with its countless bright advertising posters decorating buildings, cinemas and theaters.


Best accommodation and hotels in Soho

Find a hotel in Soho

Located between Notting Hill, Knightsbridge and Chelsea in the west of central London, Kensington is a perfect area for those looking for good budget hotels where stay. It's a rich area and very quiet, with a bohemian atmosphere, which allows you to spend a pleasant stay.

Prices and tariffs of accommodations are cheaper because the center is a bit far, but still with public transport in about 20 minutes you arrive in the heart of the city. There are many quaint bars and interesting pubs in the area, as well as good restaurants, luxury shops and art galleries. There are also two museums with lots of interactive exhibits for all ages. The area is very well served by public transport.

Covent Garden: the most central area of ​​London

If it is the first time visiting London and you want to see the main attractions of the city, Covent Garden is one of the best neighborhoods to stay in. It offers a central location, within walking distance of major London attractions such as the National Gallery, Parliament, Big Ben and London Eye.

The neighborhood has a large number of accommodation available and of a good standard, but it is difficult to find cheap rates. It is an interesting area where walking both day and night. During the day you can visit various craft markets, while in the evening entertain yourself in the various bars, restaurants or if you are you want to spend the evening at the theater. The area is a lot well connected by public transport.

Paddington: the cheapest area to sleep in

Paddington is a good choice for those looking for cheap accommodation close to the center, in a quiet and safe area, very suitable for families with children. In fact, staying here allows you to be close to Hyde Park, London's famous park and only a 10 minute walk from Oxford Street.

The neighborhood consists of a small center where there are nice shops, flea markets, cafes and restaurants. The area is also well connected by public transport. The main hub for travel is the London Paddington underground station, one of the most important in London.

Find a hotel or budget accommodation in Paddington

The City represents the historical area, where London originally developed and is a city of its own, separated from the rest of the city. Today this financial district is one of the most important in the world and one of the most expensive areas of the city.

In the area, modern skyscrapers stand next to medieval churches on ancient streets. To see the St. Paul's Cathedral Tower of London, Tower Bridge and London Museum. If you land in the City Airport with the light rail, the DLR, in less than half an hour you can reach the area.

Find a hotel in the City of London financial district

Bloomsbury: the best area for families with children

Bloomsbury is a residential area in central London. The neighborhood is characterized by landscaped and quiet areas. No doubt, one of the best and cheapest areas to stay in London. The northern area borders the station of London St Pancras, one of the main points of departure and arrival of trains, including i TGV Eurostar for Brussels and Paris.

This lively historic district it is now home to numerous historic houses and squares surrounded by elegant buildings. In the area there are the British Museum, Grant Museum of Zoology, Cartoon Museum and University College London, a prestigious British university. Not very far there is Regent's Park which is home to the London Zoo, the oldest scientific zoo in the world.

Check availability and rates for hotels and accommodations in Bloomsbury

Knightsbridge is an exclusive area with major shops and luxury hotels. For shopping do not miss the famous Harrods stores. The area is served by Knightsbridge tube station.

To see in the surroundings the beautiful park of Hyde Park, wonderful in the Christmas period, and various museums such as: the Museum of Natural History of London, the science Museum of London and the Victoria & Albert Museum.

Find a hotel or accommodation in Knightsbridge

Notting Hill: for couples and romantic trips to London

Notting Hill is one of the most romantic neighborhoods in London, made famous by the famous film “Notting Hill” with Julia Roberts and Hugh Grant. Although not exactly central, the area is very popular for its people wonderful avenues and for the lively Portobello Road market, filled with stalls selling fruit, vegetables, spices, antiques and second-hand clothes.

The area is also famous for the Carnival which takes place every year on a weekend in mid-August. It attracts over a million people and is said to be the largest carnival of its kind in the world. Except during the carnival period, it is quite easy to find cheap accommodation, fares are cheaper than central London.

Search for a hotel or accommodation in the Notting Hill area
Where to stay in Madeira: the best areas to go and visit ❯

Study English in England: where to learn standard English

Visit to the Tower of London: timetables, ticket prices and how to get there

Where to sleep in London

add a comment of Where to stay in London: best areas and neighborhoods to stay for visiting the city