Tarifa: wind and tapas in the deep south of Spain 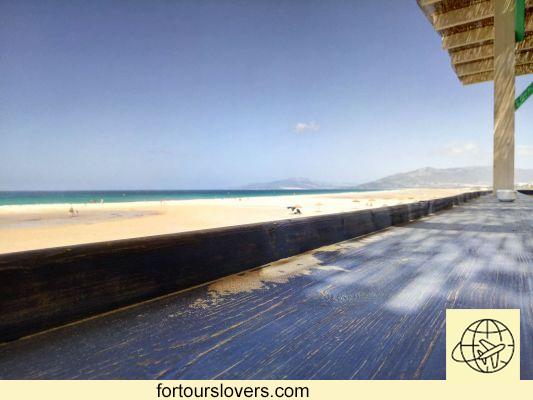 Tarifa is the southernmost point of the entire European continent. Tarifa is the place of the famous columns of Hercules. It is the wind that constantly blows on its beaches. Tarifa is having breakfast at noon, Tarifa is life and young people who pour into its streets every day and every night and animate this beautiful Andalusian city!

I remember when I first arrived in Tarifa back in October 2008 during an ontheroad in Andalusia. It was a bad day, the wind hadn't blown away the clouds this time, on the contrary, the sky was dark and the rain was more than just a threat. But I remember that the impression was very positive and I promised myself to return to this beautiful piece of Spain.

In 2017, Tarifa was not a stop on a tour in Andalusia, but rather a continuation of an itinerary in Morocco in August.

In this month Tarifa is practically "full as an egg“, You have to book the nights a few months before otherwise you risk finding only very high-priced accommodations.

Why is Tarifa so popular?

In Tarifa there is often a forte east wind, for this reason it is nicknamed the city of the wind and is considered one of the paradises for those who practice windsurf e kitesurf. Here the wind is always present and constant, just go to any beach to see how many kids with kitesurfing have fun on the cold Atlantic Ocean.

Where the Mediterranean Sea and the Atlantic Ocean meet

The city center, let's call it the historic center of Tarifa, develops to the north-east of the dock for the ferries arriving from Tangier. The center is collected and consists of a main street called Calle Sancho IV el Bravo which starts from the church and then continues towards the sea. To the right and to the left of this street there are narrow and secondary alleys that lead to the small internal squares such as Plaza San Hiscio.

From a cultural point of view apart from the Castillo de Guzman el Bueno, Tarifa does not offer much but it is not for cultural reasons that people go to Tarifa during the summer.

A pier on the beach of Los Lances

Where sleeping in Tarifa

More than where to sleep, would it be better to advise you when to book?

If you go in July or August the answer is: as soon as possible.

If you go in different periods, you will have more margin but it is always better to book early to find acceptable prices.

I really enjoyed the Pension Correo . It is exactly 1 minute walk from the center, the owner is Italian and he gave me a lot of ideas on where to eat or which were the best bars for tapas. All the recommendations were spot on, so I can only suggest you stay with him. Ask for rooms on the top floors in order to avoid being too attached to the nightlife of Tarifa which is quite active until 2/3 at night.

If you want to take a look at other hotels in Tarifa: .

6 things to do in Tarifa Spain

In Tarifa you have to have fun, have fun, enjoy the sea and the wind!

Yes, because the wind is also part of Tarifa, and during the days you spend in the city it will be a continuous love and hate.

In this piece of Andalusia you will find some of the most beautiful beaches in Spain. The Costa de la Luz is that coastal stretch washed by the ocean facing west, where the city ​​of Cadiz, one of the provinces of Andalusia.

The beaches are wide and long, sandy and windy.

The most famous and popular are there Bolonia beach, That of Valdevaqueros and finally Playa de Los Lances, the closest to the town of Tarifa. It takes 10 minutes on foot from the city center.

If you have a car, it will be very easy to change beach every day. Just follow the main road that comes out of Tarifa and turn left near each beach access.

If you are on foot instead, in the summer there is a shuttle service for a fee for the beaches. The rides are frequent and depart from the bus station of Tarifa, located a few hundred meters outside the city center in the north direction.

The ticket costs 2 euros per person, regardless of where you stop. The route traveled is from Tarifa to the Camping de Las Dunas, basically the last access to the Valdevaqueros beach.


Caution: there is also the “Valdevaqueros” stop, it is simply different accesses to the same beach which is very wide.

The bus does not go to Bolonia, or rather, on Sundays it stops at Camping de Las Dunas, on weekdays I have heard that it also leads to Bolonia.

What's the problem? That Bolonia beach is 5 km away from the main road, so it either takes you directly to the beach or you have to walk 5 km to get to the sea. For Bolonia, therefore, check with your Tarifa hotelier.

For updated information, for the timetable of the service and for all connections from Tarifa and Tarifa you can click on TodoTarifa where everything is clearly explained.

Allow me to give you some advice: if you are in the car and there will be too much wind, badly you will go back immediately and change the beach, but if, as in my case, you will be on the bus it will be better to take a look at the weather forecasts related to the wind, I relied on this updated site continuously -> https://it.windfinder.com/forecast/tarifa

The beaches I visited were Los Lances and Valdevaqueros. In the latter it was impossible to stay there because of the strong wind. While in Los Lances, being very close to the city, I went back several times.

2 - Have a beer in a chiringuito overlooking the ocean

After 12 days in Morocco I saw the beers as a mirage.

Not that he is a regular drinker but an ice cold beer after a day in the sun is all right. Here, in Tarifa stop in the first chiringuito on the beach, the one closest to the bridge that leads to Isla de las Palomas. Here with 4 euros they give you 5 bottles of beer in a basket filled with ice, all with the sun setting on the horizon over the ocean! You will appreciate this advice!

Tapas are now something very well known. The idea of ​​tapas has been exported everywhere and it is not so rare to go around your normal city and see a bar / restaurant that has taken Spanish tradition to heart, which has become fashion. The caps they are Andalusian and they are other than pinchos which are consumed by the parts of Santander in northern Spain .

To all intents and purposes they are mini-appetizers, which accompany a glass of wine.

In Spain it is customary "ir de tapas" or "go for tapas“, Go to more places and practice the same“ rite ”. Glass and Tapa and then off to another place.

In reality, the tradition has been, let's say, commercialized and now the tapas bars have an offer that includes in addition to the tapa also a half ration o a whole ration of the chosen food. So going for tapas can also turn into "I'm in one bar and have dinner by taking larger courses".

Both things are great because you fall on your feet when you eat tapas in Spain. The quality of the tapas that are brought is good or bad always excellent, not only in Tarifa but also in Seville and in all other Andalusian areas. You dine well, spending little and tasting different dishes.

But if you have never “gone for tapas” the advice is to catch the ball and spend an evening wandering around the bar counters of Tarifa emulating real Spaniards!

Some recommended tapas bars and restaurants in Tarifa

We always talk about food, and otherwise it could not be done since in Tarifa you eat really well. One of the main dishes, also served as a tapa, is the bluefin tuna. In almost all the places I went to during my 4 days, it was always included in the menu. I tasted the one from the tapas bar "La Lola". Several reviews praised their tuna, they were right!

5 - Bathing in the ocean

I have to be honest, calling it "bathroom" is perhaps a bit too exaggerated. It would be better to call it "footsteps". The ocean is cold, it is quite cold and that much you can't stay soaking. However, the water of Playa Los Lances is beautiful and clean.

View on the beach of Los Lances

6 - Experience the city in the evening

I think you already understand this by now. Tarifa must be experienced on its beaches during the day and in its squares during the evening. Its three small squares hidden in the alleys are always lively and crowded. The advice is: get lost in the alleys full of people.

How to get there: the ferry from Tangier to Tarifa

Tarifa is distant as the crow flies 14 km from the Moroccan coast. Many opt for day trips by ferry to Tangier and then return to Tarifa in the evening.

One of the fast ferries that connects Tarifa to Tangier

In my case it was a one way trip because I was arriving from a trip to Morocco.

The ferries are modern fast ships that connect the two continents in just 35 minutes.

Whether you go to Morocco or from Tangier you come to Europe, you can easily buy the ticket at the port ticket offices, you do not need to buy it first and in any case, even if there is no space on the ship because maybe the parking spaces have run out. you would find it on the next. A ferry leaves every hour and there are several companies like the FRS and Intershipping. The cost per person is about 35 / 40 euro, machine excluded.

Su this site you can find timetables by simulating a departure date.

Caution: the ferry arrives in Tangier Ville and NOT Tangier Med which is a completely different port.

Other ways to reach Tarifa

Tarifa can be reached by flying into Seville or Malaga, then taking the bus route from the city you arrive in to Tarifa. From Seville it costs around 19 euros and covers the route in 3 hours from the Seville bus station.

Audio Video Tarifa: wind and tapas in the deep south of Spain
Visit Helsinki like a local with #HelsinkiSecret ❯

add a comment of Tarifa: wind and tapas in the deep south of Spain